The title is kind of gothicky, and I’ve always enjoyed a good gothic, so I was comfortable with that.  And the first page tells me the story is set in Cornwall in 1813.  As a great fan of both Daphne duMaurier and Winston Graham, I looked forward to another Cornish tale.  Unfortunately, Secrets of Midnight didn’t stand up very well in comparison. 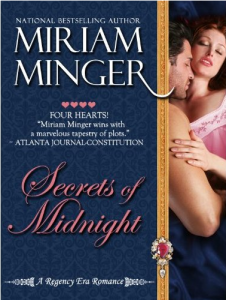 The story begins with two young women, Corisande Easton and Lindsay Somerset, sharing their last day together in their native Cornwall before Lindsay is to go off to London for her first Season.  She begs her dear friend Corisande, the vicar’s daughter, to join her, but Corie steadfastly refuses, citing her obligations to her widowed father and younger sisters as well as to the working poor of the parish: the tin miners, farmers, and fishermen and their families.  We’re told that Corie is disfigured by a scar on her cheek.

Next we meet tall, dark, handsome Donovan Trent, second son of the late Duke of Arundale, and his brother Nigel the current holder of that title.  Nigel informs Donovan, who has recently returned from four years on the Peninsula fighting Bonaparte, that according to their father’s will Donovan must marry in order to receive his inheritance, which is an estate and tin mine in Cornwall.  Donovan reluctantly and angrily agrees but only because he needs the money from the inheritance so he can return to Spain and search for someone known as “Paloma.”

Donovan and Corie meet under strained circumstances when she arrives at his estate near Porthleven and attacks his agent, the timid and obsequious Henry Gilbert, with a pitchfork.  She demands that the tinners operating the mine known as Arundale’s Kitchen be treated fairly and their hated overseer Jack Pascoe sacked.  Corie has no way of knowing Donovan has already done everything she’s seeking.  He decides she’s a perfect choice to fulfill the terms of his father’s will and so he proposes a marriage of convenience, to be annulled as soon as the paperwork is signed giving him his inheritance.  She agrees, but only because he has made improved treatment of the tinners conditional upon the marriage.

Corie, the vicar’s daughter, has a temper.  I found that a bit difficult to swallow because Minger hadn’t given sufficient motivation or background for the temper.  Without sufficient explanation, Corie came across as every bit the shrew Donovan accuses her of being.  The fact that she works with the poor,, helps the brandy-smuggling free trader captain Oliver Trelawney, and has the responsibility for her father and siblings, I found her lack of patience with Donovan inexplicable.

His patience with her was a bit more understandable because at least he had a motive, even if it was just to get the money.  And while I didn’t like the tiny bit of physical discipline Donovan inflicted on Corie late in the book, I had to admit I sort of sympathized with him.  He was dealing with a woman whose control of her temper was about on the level of a spoiled five-year-old drama queen.

The romance is complicated not with any single Big Mis but with dozens of little ones, and then finally resolved when a totally unlooked for Major Complication puts everyone’s lives in danger.  Minger could have done more to set up this complication as an integral part of the story; it seemed contrived and disconnected from the rest of the plot.  She could also have done a better job exploring Corisande’s emotional baggage so her infantile tantrums made more sense.  She’s not TSTL, just impulsive with a hair-trigger temper.

There was much in Secrets of Midnight to remind me of Winston Graham’s Poldark novels, almost to the point of wondering if that was where Minger had done most of her research.  Unfortunately neither the quality of the writing, the depth of the characters, nor the overall sense of place and time came close to equalling Graham’s.  Like many digitally republished books, this has a few formatting glitches, but they are few and very minor, no worse than the typos you’d normally find in a printed book.  And the price is certainly attractive at 99 cents on Amazon currently.  If all you’re looking for is a pleasant romantic read, this will suffice, but it’s not likely a book that will stay with you for years after the first reading. C