DUAL REVIEW: In the Arms of the Marquess by Katherine Ashe

This is a Dual Review instead of Dueling because Sunita and I came away feeling the same about the book but for slightly different reasons.

I read less historical romance than I used to, but I was intrigued by the description of your book, as well as by your bio. I approach books set partly or wholly in British India with trepidation but I am still drawn to them. And I was hopeful that your day job as a history professor would improve my chances of reading a sensitively rendered, well-contextualized story. Unfortunately, my hopes were not entirely fulfilled. 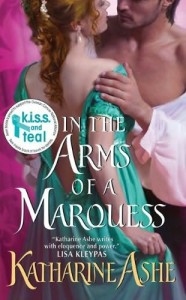 The book focuses on the romance between Octavia (Tavy) Pierce, an intelligent, imaginative and lovely spinster of twenty-five who has recently returned to England from India, and Benjirou, the Earl of Dorée, a half-Indian aristocrat who first met Tavy when she landed in Madras at the age of fifteen. Ben rescued Tavy from villains upon her arrival, and they fell in love but were driven apart by Tavy’s aunt and uncle. This break was the first of several Big Misunderstandings that occur over the course of the novel.

When Tavy and Ben fell in love in India, Tavy was a coltish teenager and Ben was the youngest, half-Indian son of the Marquess of Dorée’s second marriage. The Marquess soon abandoned his high-caste Indian wife and returned to England and his older sons, but he and his heir perished in a hunting-box fire and Ben inherited the Marquessate. Ben added this title to his existing assets, which include his inheritance from his mother’s brother (a fortune described as so vast that it dwarfs all Indian and many British fortunes).

When they meet again in London, Tavy and Ben are irresistibly drawn to each other, and their passions flair as strongly as they did seven years before. Unfortunately, so does their complete inability to talk to each other, and after a beautifully written love scene, they are back to assuming the worst. Their on-again, off-again passion is obstructed by a plot that involves Ben’s eldest brother’s erstwhile fiancée, the suspicious fire that killed his father and brother, Tavy’s self-declared fiancé and his blackmail problems, and a plot that involves aristocratic villains, innocent women, and trading ships carrying illicit cargo.

If this sounds complicated, it’s because it is. The central focus should be the romance, which is lovely and compelling when Tavy and Ben are front and center. But all too often we are treated to scenes with Tavy’s pallid would-be-fiancé, the Baron (of?) Crispin; her sister and sundry other relatives; Crispin’s business partners; and Ben’s associates. These scenes are less effective and quite confusing. It was refreshing to read a storyline that deals with the seamier side of English society and that takes political and economic issues seriously, but it would have been easier to follow with fewer twists and turns and about half as many characters.

Most problematic  for me, however, is the setting. You begin the novel with fifteen-year-old Tavy arriving in Madras and becoming enchanted by the sounds and colors of exotic India. Wonderful! But then I’m repeatedly pulled out of the story by the details. Why does everyone in Madras speak Hindi? Aside from the fact that Hindi wasn’t a distinct language until much later in the 19th Century, why are Tamils speaking it at all? Why is no one in the cradle of Tamil linguistic and cultural hegemony, speaking his or her own language?

And why is Ben described as forging alliances with “Mughal princes,” when by 1820 the Mughal Emperor was essentially a puppet of British India whose reach did not extend outside the north? It would make more sense to namecheck Tipu Sultan here, and even he had succumbed to the British before the prologue takes place.

Historically contested stereotypes are reproduced here as if they are fact. Ben’s aunt begs him not to offer for Tavy because

The potential for disaster was too great so soon after his uncle’s death. According to her husband’s last wish, she had not thrown herself upon the funeral pyre as customary, and many of his native business associates were unhappy with this breach of tradition. They claimed that the family had become too western and could not be trusted. (emphasis added)

Let’s skip over the depiction of wealthy Brahmins in South India as traders (Hindu doctrine made that quite difficult for a variety of reasons). But sati as customary? Um, no. Sati did occur, and the British were understandably appalled by it. But as a historian, you should appreciate that the British obsession with sati did not reflect widespread practice, especially in South India. It would have been one thing to have British characters embracing this stereotype, but to have Indians acting as if it was done as a matter of course is, to put it mildly, problematic. And if this isn’t enough, you revive another old canard:

“And I have heard that dusky men have enormous –“

“Well.” The diminutive countess seemed to recollect herself. “He is not all that exotic.”

It’s bad enough to read “dusky” and “enormous,” although, to be fair, you put the words in the mouth of an unsympathetic character. But it’s the wrong stereotype. Indian men were dismissed as effeminate by the British, and their masculinity was regularly impugned. On top of that, south Indians were on average quite short and slight, so it’s extremely unlikely that British women would have attributed any masculine prowess to that particular exotic background.

Next to these examples, the rest are positively minor.  Ben utters Sanskrit words during sex (which is analogous to an English Catholic calling out bits of the Latin Mass). Tavy’s pet monkey is imported from America despite the fact that India is positively overrun with the creatures. And Ben’s motley array of “native” servants  (comprising a half-Japanese cousin, a Sikh apparently rescued from a pirate/slave ship, and Tavy’s large and imposing Indian servant who is unaccountably endowed with a woman’s name) seem to be drawn from a traveling show.

Every time I was swept up in the pleasure of the romance, something in the context came along to yank me right out. I really appreciate the attempt to extend the Regency trope by incorporating non-English settings. I just wish it could have been executed in a way that didn’t have me reaching for paste to glue the wallpaper back into place.

As Sunita notes above, you have quite the lovely writing style but my overall enjoyment of the story was marred, not by the cultural or historical inaccuracies, but the machinations of the plot itself.  The entirety of the conflict of Ben and Tavy was the result of Ben’s stubborn adherence to the belief that Tavy had somehow wronged him when she did not accept his unspoken marriage proposal when she was 18.

Sunita describes the scene a bit above where Ben comes to offer for Tavy but is turned away by her aunt.  Ben decides that Tavy is just like all the other women who have ever wanted him –  one who wanted the taste of an exotic.

But she had a penchant for the exotic, her aunt had said. He should have guessed that. Even at that young age he had already had more than his share of women who took an extra thrill in being with him, believing themselves especially wicked. Women who wanted to feel and appear wicked even more than they wanted pleasure. He had used that to his uncle’s advantage, and the pleasure he got from those encounters was great. The pain was greater still.

There were some sly intimations at the end of a few POVs from Ben that he was forcing himself to view Tavy as a faithless whore so that it justified his decision to not pursue her so many years ago.  But I got the impression that Ben rather liked his hair shirt and his martyr position.

Because he could not then and still could not believe in her deceit, although he had tried to convince himself of it again and again. To absolve himself of guilt.

I suppose I could have read this as Ben lying to himself the entire book but he carries on as if he does believe in her guilt, treating her half with scorn and disdain and half with mad want.

“You are being unfaithful to your betrothed,” he murmured.
She did not respond immediately.
“It is you,” she finally whispered.
He went still, only his heartbeats battering a quick tempo. “Because of who I am.”
“Of course.”
Ben’s chest constricted. He released her and stepped back.
“It is unfortunate for you then, madam, that I have had enough women like you to last me a lifetime.”

I couldn’t figure out his motivations.   Did he set her away from him emotionally because he felt he could not carry on his secret activities if Tavy were his wife?  The things that would have kept them apart when he was in his early twenties did not appear to exist now that he had ascended to the Marquessate.  The only thing that seemed to keep them apart was Ben’s own desire to want to view Tavy in a poor light.  He goes about making sure that she is just what he always suspected – a manipulative liar who just wants to bed him because he’s exotic.  It was frustrating that he would continually view Tavy in such a manner when she hadn’t ever exhibited such behaviors previously.  Of course, after he seduces her while she is on the cusp of a betrothal with another man gives him all the evidence he needs that she is the faithless woman he’s always thought.

Ben’s self-deception carries forth far into the end of the book. Instead of confiding in Tavy what he has confided in everyone else he withhold the truth of her so that she ends up  in danger causing him much alarm. Damn her for not reading his mind.

Compounding this was the shaded way in which you wrote about Ben’s secret activities.  It was quite obvious what the secret activities were even from the first intimation of them in Chapter 2, yet, the activities are constantly alluded to rather than explicitly stated and I felt that subterfuge (much like the emotional conflict) was unnecessarily drawn out.

I felt saddened that these overt manipulations were what drove the emotional conflict because the writing is beautiful but I felt the authorial intrusion keenly. C