You are a favorite author of mine despite some serious missteps (KissedBy Shadows – What were you thinking?). I really enjoyed Almost a Bride even though many thought that Jack, the hero, was too cold and mistreated Arabella. I defended you on message boards claiming that Jack did love Arabella and showed it in a way that was consistent with his own character, position and time period. I cannot defend your book Almost a Lady. It’s almost as if you hate us romance readers because your book is so devoid of romance and tender emotion, that it’s like you are slapping us in the face. 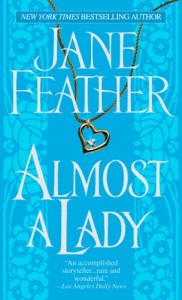 What was wrong with this book? Let me count the ways. First, your characters have no backstory, no motivation, no setting. It is as if the two characters are born fully formed and at the prime of their lives. Meg, your heroine, who is a gently bred baron’s daughter loses her virginity at quite young age in Venice to some boatman. There is no explanation as to why a gently bred girl would have done this. There is nothing in the story to explain this course of action. Cosimo, the hero, is an assassin. Why he is an assassin, when he started, who he works for, I am not sure. I know only that he has two twin sisters younger than he and his mother liked things Italian (kind of like Meg). I don’t think that I even knew his last name, if he had one.

Cosimo is expecting a female operative to join him in a mission to kill someone in France. It is pretty easy to guess who. Anna, the operative, does not show up. Instead Meg stumbles into the carriage meant for Anna. Cosimo must go forward with the mission and he needs a woman to do so. He seduces Meg for the sole purpose of binding her to him to fulfill his mission. That left me a rather bad taste in my mouth. It doesn’t rise to the level of the KIS hero but it does show a coldness and disregard for Meg’s feelings. The way in which Cosimo treats Meg is a hallmark of the entire story: cold, calculating and selfish.

Anna and Cosimo have worked together frequently and they would have “relationships” during the time that they worked together. To some extent, Meg is simply a replacement for Anna – in all things. I think that led to my dislike for the situation. Even though Cosimo said that he didn’t compare the two, you always showed Cosimo comparing them in his mind – that Anna would have done this or wore this. Meg was different in this way and that. And he cared for Anna – a great deal. It shadowed him that she was somewhere hurt and/or captured.

For Meg, I don’t understand why she choose to so carelessly throw away her reputation and truly, her future, on a romantic liason with Cosimo. I don’t mind that she made the choice, I just don’t understand the motivation. In the end, I didn’t understand where the two of them were going. It wasn’t akin to All Through the Night where Jack and Anne could no longer stomach society and being the tools that they were within that greater mechanism and wanted to get away. Disappearing and remaking their lives made sense to me. Not so for Meg.

You can write. Parts of the books are spirited. I particularly liked the realistic revulsion Meg had to Cosimo being an assassin but at the end of the day, he was still an assassin and all her prior qualms about it were simply swept away with lust.

At the end of the story, I just regretted spending time with Cosimo and Meg and didn’t feel their relationship constituted a romance at all. I almost am tempted to give you a D but because your writing is technically good, I’ll settle for the C-.
Best regards,

P.S. The title? What the hell does that have to do with anything?