REVIEWS: Heat It Up, Heat of the Night, The Heat is On by Elle Kennedy

Previously in the land of Dear Author, I wrote up my thoughts about the Out of Uniform series by Elle Kennedy.   This is a series of novellas published by Samhain Publishing and each story features the love affair and subsequent romance of Seal Team Fifteen. The first three stories were reviewed here and the last of the Seal Team Fifteen stories are reviewed here.   Ironically, the first story includes a menage and the last story ends in a menage and both have very similar overtones and I wondered at their symmetry. Intentional or serendipitous? The great thing about these stories is that they are short and inexpensive. The biggest detraction, however, is the length.   For the most part, I found that the conflicts were too serious or required more exploration and advancement than the novella length provided.

However, they were fun, sexy and very readable and I felt that I got my money’s worth even though I wished for more. 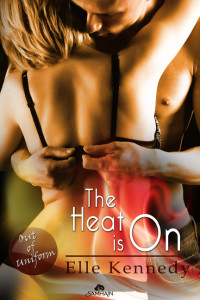 Heat It Up, pubbed June 2010.   I was originally reluctant to read this story because I’m not a fan of journalist heroes or heroines, probably because they are often being portrayed as delving into people’s private lives without justification or “just for the story” and the blurb for this made me wonder about heroine Jane Harrison.   She’s a writer and seeks out Thomas Becker, new SEAL team leader for Team 15, after he participates in a rescue mission of US civilians, including her sister.   Her magazine has a great shot of Becker outlined against the helicopter, looking heroic and manly. Becker turns her request for an interview down and Jane acquiesces, understanding his desire to not elevate himself above his team members.   When the two are stuck in an elevator, Becker doesn’t resist her unspoken invitation to allay her claustrophobia with a physical distraction. One thing leads to another and the two embark on an eight day fling.

Becker is a serious kind of guy who just got divorced.   Jane is enjoying the time she is spending with Becker but soon their sex only relationship begins to look like the two are dating, confusing both Jane and Becker. Becker thinks he will just screw Jane out of his system because she doesn’t fit into his vision of his future. He wants a sweet little wife and he had the ambitious, career oriented woman and that led to his divorce.   Jane finds in Becker everything she wants but she isn’t going to give up her dreams of a great career for him.   Next to Heat of Passion, this is my next favorite in the collection.   Jane and Becker are a great pair, the dialogue is funny, and the sex is smoking hot.   And, I admit, I loved the scene where Becker is getting relationship advice from Carson and Holly.

"So, why were you stir crazy? Did you get in a fight with that sexy-as-sin redhead you were with the other day?"

"Not really." He gave a noncommittal shrug.

"Then why the hell aren't you with her?"

Holly suddenly poked her head into the living room. "With who?" she said, looking super interested.

"Are you gossiping? If so, I want to know everything."

"Oh God," she said with a groan. "Thomas, don't listen to him. He's terrible at giving advice."

Becker found himself grinning as Holly bounced back into the room, her green eyes flashing with curiosity. She flopped down on the armchair across from the couch, leaned forward and narrowed her eyes at Becker. "Okay, tell me everything. I'm much better at this kind of thing. Who is she?" 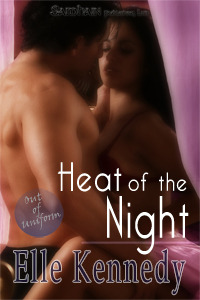 Heat of the Night, pubbed November 2010.   I swear I wrote a review of this book somewhere but I can’t find it. Maybe I sleep review?   Annabelle Holmes gets dumped because she’s too vanilla for her uptight fiance.   She makes out a sex list of all the things she wants to do sexually to prove to herself that she is not uptight or prudish.   Ryan Evans comes home from a mission and wants to unwind with his sexually adventurous, always willing upstairs neighbor.   He lets himself into her apartment and climbs into bed with her but instead finds Annabelle.

Annabelle is from a very wealthy family and when she brings Ryan home for a party, he feels out of place.   He takes out his uneasiness on Annabelle.   While I didn’t find this to be unbelievable or out of character, I did think it was strange that Ryan felt so strongly about the inequality of the situation when he and Annabelle had been just having a fling. I didn’t understand the depth of his emotional disquiet given the circumstances.   Ryan was also mixed up emotionally because he thought he was in love with Jane from Heat It Up. While this is an incredibly hot story and the setup (Annabelle’s sexual bucket list) worked, the emotional conflict and speed at which Ryan and Annabelle fell for each other lacked substance. C+

This book is an ARC I received from Samhain and despite the fact I didn’t love it, it was good enough that I went and bought the rest of the series leading to my Elle Kennedy glom. Matt O’Connor is a manwhore and pretty much enjoying life. He’s single, loves what he does, and has more women hanging off his jock than he knows what to do with.   Unfortunately for Matt, whenever he comes up against Savannah.   Savannah loves the thrill of the chase, the first time she kisses someone, her first orgasm with that guy, and then it all fizzles so she drifts from guy to guy, enjoying being single, successful, and available. I loved Savannah’s utter confidence in her sexuality.   At one point, she admits that cute guys are in a constant supply and she is totally unapologetic about getting sex and enjoying it.   Essentially, she and Matt are the same kind of person.

“Naah, I think I'll pass," she finally said, then had the nerve to give him a sympathetic smile.

He returned the smile, but his was loaded with heat. "Are you sure? You were just caught up in very dangerous situation-‘I think you might need some comforting."

She gave an unladylike snort. "Comfort sex? Seriously, you're offering me comfort sex?" Matt faltered. Again. This woman was totally throwing him off his game here. He pushed aside the disconcerting thought, gathering up every ounce of charm and confidence he possessed. "I think you might need it," he said solemnly. She just raised one dark-blonde eyebrow. "I think I need to get to work, actually." She took off walking again.

It’s fun to see a player shown a bit inept. I liked the role reversal and how Matt’s attraction to Savannah and her indifference brought out “his inner stammer”.   It was fun and different.   When Matt starts showing signs of wanting something series, Savannah panics.   She tries to turn Matt off including inviting another person into their bedroom which leads to this uncomfortable menage.   Even though Kennedy writes great sex scenes, I felt bad for Matt throughout the story and I kept wondering what Savannah was really thinking.   Did she have remorse?   Any kind of regret for this? Was she so myopic that she couldn’t see that Matt really didn’t want this and why did Matt stay if the menage wasn’t something he wanted with Savannah.   While it wasn’t a forced sex scene, I felt like Matt hadn’t fully committed himself to the act and therefore I wasn’t comfortable as the reader.   I understand that Savannah enjoyed and pursued her own pleasure but I didn’t like that someone would be hurt in the process, regardless of whether it was a pro female statement.   C+

→ Jane
Previous article: REVIEWS: Heat of the Moment, Heat of the Storm, Heat of Passion by Elle Kennedy
Next Post: Open Thread for Authors (Author Promo) for April 2011