A few years ago it seems quilting in romance books was all the rage. Now it appears that knitting has taken over. I’ve resisted reading any of these books since I’m not a knitter but in my quest to expand my single title contemporary repertoire, I decided to take the plunge with your book “Wishes and Stitches” since it features an outsider heroine who’s also a doctor. I figured that way, she’s got some other interests besides yarn. 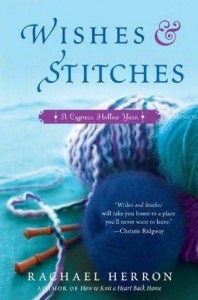 Naomi Fontaine had a great time at a recent medical conference which included a hot night with a handsome fellow attendee. Thinking she’d probably not ever see him again, she let it all loose and both had a night to remember. So when Rig Keller shows up in the small town of Cedar Hollow, CA where Naomi practices Family Medicine (GP), she’s shocked. Her next stunner is when she discovers that her pretty much absentee partner is selling out and that Rig is taking his place in the practice.

Rig, so called because up til now he’s practiced on the Gulf oil rigs, enjoyed the time he spent with Naomi at the conference and has no intention of not pursuing a relationship with her now that they’re living in the same town and seeing each other on a day to day basis. But he can’t seem to figure her out. The warm, confident woman of That Night is not who he’s seeing. Yes, she’s an excellent doctor but outside of work, she keeps a tight rein on her emotions and doesn’t appear to want to let him back into her private life.

Her secret is that Naomi desperately wants to be a part of her new community but a natural reserve keeps her from just jumping into town life. Rig, on the other hand, seems right at home with a long established brother in the community. If he presses for more from her, will Naomi open up personally and professionally? And if she does, is Rig ready and willing to commit to a future together?

Good God the people of this town love to knit. Rig calls it correctly when he says something to the effect that this is the knittingest town he’s ever seen. I wonder if the townsfolk would shun someone because that person – gasp! – crochets or, worse, merely sews or scrapbooks? Is there a roadblock at the edge of town to check for balls of yarn before a person is allowed within the city limits? I like characters with outside interests beyond sex or their jobs but this borders on obsession.

Naomi Fontaine is reserved to the point of almost being an emotional stone wall in the face of others yet she’s got such a deep well of need to fit in and be accepted. That plus the fact that this is a small, blue collar town whose townsfolk feel a social gulf between themselves and the doctor don’t help her to fit in and be welcomed with open arms. Rig has an “in” since his brother has lived there for years and is an accepted part of the community. And he’s also a more “open” personality. Meanwhile, Naomi has spent her childhood and most of her adulthood, on getting good grades in order to fulfill her lifelong goal of being a doctor with little time spent socializing outside of those in her profession. Her difficulties in small talk and being part of the crowd might seem exaggerated but they also feel poignant and serve to show the glass wall between Naomi and what she wants – to be accepted.

Naomi’s got some baggage in the persons of her younger and – in Naomi’s mind – favored sister Anna and her mother with whom Naomi has never gotten along. These issues don’t feel made up or too far fetched. A lifetime of this also helps shade in the details on why Naomi would feel as if she’s trying but not getting anywhere with the people of Cedar Hollow. The flashes of anger Naomi shows when Anna appears on her doorstep expecting Naomi to fix the mess Anna has made of her life show that Naomi isn’t a pushover. The fact that Naomi doesn’t just tell Anna to take a hike show that deep down, she does love her sister but this time it’s going to be tough love.

Despite the fact that Rig is apparently more self assured than Naomi doesn’t count for much in their relationship. The book starts off with them already having met and spent a night of hot sexing at a medical conference and it’s Rig who spends the book chasing after Naomi while coaxing her into a repeat of the best sex of his life. This is a neat turn on the usual heroine who is shy of and bumbling at sex with a cool, confident hero. The Big Mis, when it came, arrived out of Naomi and Rig’s profession and seemed relevant to who they are and how they see themselves – plus a healthy dollop of family love. It takes Rig a little while to get over what happens but as he does, he comes to a greater and deeper understanding of this woman he loves.

I loved the humorous scenes scattered throughout the story. The one of Naomi running into Rig’s father Frank – in the condom aisle of the local pharmacy store – when Frank knows Naomi and Rig are about to go out on a date, had me in stitches – sorry bad pun. The men of the Keller clan were fun to read about and such…well, men. Of the two secondary romances, Frank’s worked better for me than the quickie of Rig’s brother Jake. That one is just too fast though the fact that both Keller brothers end the book happily living in sin at the instigation of their ladies is cool with me.

I will admit to a partiality for books with the hero chasing after his heroine so on that score, the romance in this one works for me. What I got tired of is the almost cult like mania for knitting. If this is a reader’s craft of choice then they’ll probably be happier while reading about it but for those uninterested in it – like me – it felt like a cup of Kool Aid along with a pair of knitting needles was being pressed on me by a group eerily smiling people. C+