I read the first in the Whiskey Creek series. It introduced us to a small town in California and a group of friends who have been connected since high school. They are close friends, up in your business, friends. They have conference calls and phone trees and none of your personal stuff ever stays private with these folks. It’s amazing and intrusive but actually comes off caring and welcoming in a strange way. 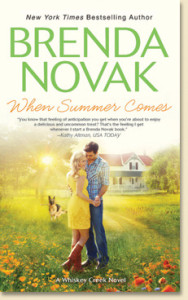 In “When Summer Comes”, Callie Vanetta has withdrawn from the group of friends, taken a sabbatical of sorts from her wedding and family photography business, and moved onto her grandparent’s farm. She’s done all these things because Callie has a form of non alcohol related liver disease and without a liver transplant, this summer will be her last. Caliie puts off telling her family and her friends because she does not want to feel their sorrow or their pity. She wanted to enjoy the last days of her life without the burdens of trying to be brave or assuring others that she will fight for her survival.

One night Levi McCloud appears on her doorstep, bloodied after an attack with a couple of pit bulls and in need of place to stay. Since Levi returned from Afghanistan, he’s been roaming from town to town on his motorcycle picking up odd jobs in exchange for housing and then moving on. When Callie sees him she thinks that she can’t save herself but maybe she can save him. She opens her home to Levi and eventually her heart.

The writing is overly simplisitic at times and there were too many medical terms explained to us in an inelegant fashion, much like an info dump in a fantasy book:

A week! Maybe she’d be gone before Levi…

She swallowed. “How bad is it?”

“It’s affected your MELD score by a fairly signifi­cant margin.”

The Model for End­stage Liver Disease or MELD score was how the United Network for Organ Sharing determined where she belonged on the national donor list. A computer­generated number between six and forty, based on blood tests, indicated how likely she was to die in the next ninety days without a transplant. The higher the number, the more serious her condition.

And really, because this was a romance Callie’s cure is a foregone conclusion. But Callie and Levi’s romance is rather sweet. Levi fell in love with a woman in Afghanistan but their love was forbidden and his mere attention to the woman placed her in danger. He still has strong feelings toward her years after he left her behind and he struggles with his attraction toward Callie. Levi doesn’t have a secret stash of wealth and he’s not going to sweep Callie off her feet but he’s strong and capable and decent.

Callie’s actions toward Levi are completely understandable in her circumstances and how she is depicted in the story. She wants to reach out to Levi and she lives, in some sense, without the barriers that may be in place in a normal situation. She’s honest about her attraction to Levi. She delights in buying him a few things like jeans or a shirt. Making someone else happy makes her happy.

Her close friends and their relationship troubles are a bit intrusive and I found them mostly irritating because they felt like they were they to set up future books than to provide insight into the burgeoning relationship between Levi and Callie.

Callie’s profession as a photographer is given almost no attention other than to make references to a few pictures in her house. Her point of view doesn’t reflect how she views things differently than someone else who doesn’t make a living capturing images. Levi’s past as a vet and a former MMA fighter are a little more integral to the storyline.

This is a slow moving romance and focuses almost more on Callie’s fight with her disease but the sweetness of the story drew me in. These Whiskey Creek novels are pleasant diversions. They aren’t breaking down barriers, but an escape from the non billionaire alpha hero was a relief. C+

→ Jane
Previous article: Have Publishers Won the DRM Debate and Does It Matter?
Next Post: REVIEW: Forged by Becky Banks