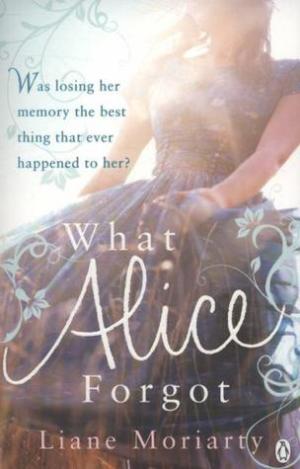 My neighbor invited me to join a new book club, and while I’m skeptical of book clubs I really like my neighbor and would like to spend more time with her and other women readers. The first book chosen was this one by Liane Moriarty, whose name I’ve seen often in my twitter stream and blog wanderings, but whom I’ve never read.

I’ve seen Moriarty’s books variously described as mysteries or contemporaries with a twist. They usually focus on a group of women (sisters or friends) and their domestic lives: marriage, children, running a household, etc., from what I understand. It’s not my usual choice but I was more than willing to read it if that was the book club book.

This is an amnesia plot. Alice, our main POV character, knocks herself out during a spinning class and when she comes to, she believes herself to be a 29 year old pregnant woman who is happily married to Nick. She’s shy, a bit scattered, and unfashionable. But then Alice discovers that it’s ten years later in her life and she’s a thin, Type-A Yummy Mummy about to turn 40. Oh, and she has three children and is involved in nasty divorce proceedings with the now-horrible Nick.

Alice struggles to make sense of the way she feels v. the way she apparently lives now. She remembers nothing of her current life and she can’t understand why she’s estranged from her sister Elisabeth, why she and Nick apparently hate each other, and why she is so good at wearing lovely clothes and perfect makeup. And what happened to their fixer-upper house which is now a showplace with a pool?

This is a great setup. I often enjoy amnesia plots, and Alice has a chance for a do-over if she can get a handle on what happened. And she eventually does. Much of the disconnect revolves around her frend and neighbor, Gina, who was as important to her as her family, but whose name everyone tiptoes around in conversation.

But while the book started out strongly, it faded fast.

The first problem was the writing style. Moriarty has this breezy, stream of consciousness style, which got old in a hurry. So many words for so little action or introspection. Alice is going through major emotional upheaval, but it doesn’t really come through in the writing. Think Lifetime Movies. Moriarty also employs a time-honored epistolary technique to convey information through not one but two POV characters. But these letters aren’t seen by anyone else, let alone responded to, during the book. So they serve more as infodumps that break up Alice’s narrative. They’re not uninteresting, and they do offer insights into several characters, but they break up the flow of the novel. I couldn’t stop seeing them as a clumsy writing device rather than part of the whole.

The second problem was that there’s not much in the way of story, whether you’re looking for plot or characterization. Alice’s primary emotion for much of the book is confusion. Young Alice is more appealing than middle-aged Alice (to herself and to the reader) but we don’t know what happened to middle-aged Alice until the very end. Nick is sweet in the past and a workaholic, disengaged father now, but in neither period do we have a sense of what makes him tick. Gina is pivotal but the big reveal is a damp squib. The children have the potential to be interesting but only the eldest gets much complexity and even that is predictable. The information is doled out in dribs and drabs, for no apparent reason other than to extend the storyline. Whenever Alice asks about something, her friends and family refuse to tell her very much, and given she plays down the scope of her amnesia with everyone, it’s not clear what they’re protecting her from.

The third problem is partly a Me Problem and partly a Book Problem. The women and community Moriarty write about are part of the Affluent Mom world. I have little interest in reading about this world, and she’s not a good enough writer to bridge that gap and make the characters and context resonate for me. The novel is centrally concerned with infertility and motherhood, with a secondary interest in the marital, maternal, and day-to-day problems of privileged white women. All these things are described in far more detail than their interior lives or any of the other external aspects of the characters. Some of the adults have careers (mostly the men), but we get almost no information on those careers; the only exception to this is Elisabeth, and her career success is juxtaposed to her infertility and her strained marriage. The children have talent, we’re told, but their talents aren’t deployed to inform them as people. Everything is just very superficial. I’ve read plenty of books about people I don’t understand or relate to but who become very real to me. That didn’t happen here.

There is an epilogue which adds more icing to the confectionery cake, with maybe one surprise in it. HEAs all around. I was just relieved it was over. Grade: C+