REVIEW: The Viscount Needs a Wife by Jo Beverley 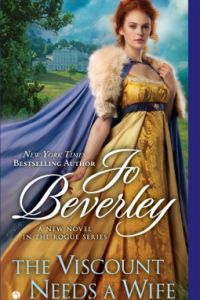 Since being widowed two years ago, Kitty Cateril has been trapped in her late husband’s home, where she is expected to mourn forever. Desperate to escape, Kitty will consider any option—even a hasty marriage to a stranger with no intention of abandoning his bachelor ways.

London life suits Beau Braydon, especially his work keeping Britain safe. So when he inherits the title of Viscount Dauntry, he has no intention of resettling on a rural estate. He can’t resist the opportunity to marry a sensible widow who can manage Beauchamp Abbey for him—until he realizes Kitty is more than he bargained for…

Before Kitty and Dauntry can adjust to each other, a threat to the royal family takes them to London. Soon someone is determined to prevent Dauntry from exposing the villain, and secrets in Kitty’s past threaten their growing love…

Last year’s book,“Too Dangerous for a Lady,” introduced a new character to your world of Rogues in the person of Mr. (prefers not to use his given name) Braydon, a retired military man who has inherited the means that allows him to pursue a life of leisure and thus be available in that story to assist where needed. Though I had issues with that book, he intrigued me. The except for this book did its job and captured my interest due both to the fact that he would be the hero and also the set up for his heroine. Needless to say, when I could, I requested it.

I love it when a book works with actual history rather than fighting it every step of the way. Here, the much lamented death of the only legitimate grandchild of King George III, Princess Charlotte, in childbirth starts both sections of the plot into motion. Kitty’s already been in mourning for her husband but the death of the Princess followed by the letter from Kitty’s friend, which points towards a way out, spurs Kitty to action to escape spending the rest of her life this way.

But Kitty stops and thinks about the invitation before leaping. She’s a military widow so Braydon’s status as a former soldier alarms her. She’s seen the visible as well as invisible scars these men sometimes bear. Also, she escaped one less than wonderful marriage but there’s no guarantee that if this one is worse, she’ll be so lucky again. Thus I applaud her as she calmly and rationally orders her thoughts and enumerates the benefits for and against it.

Meanwhile, Braydon’s seeming bizarre marriage requirements make sense from his POV in light of his behind the scenes work for the government in London and the intolerable situation he faces at the Abbey from the relatives of the former Viscount. Neither is looking for love in marriage. Kitty found it doesn’t always lead to a happy ending and Braydon views marriage as another chore to be ticked off his “to do” list. Once the decision is made, I liked how it was done properly from the viewpoint of the villagers and the couple’s friends.

Kitty has a fixation on the fate of her errant Viscountess predecessor and also on her wedding night. Though each is understandable, reading her constant thoughts on them got tiresome. Braydon’s jealousy of Kitty’s past military admirers also reared its head often – too often. I did like that this marriage of convenience didn’t immediately gel nor did Kitty and Braydon start off seeing eye to eye since they are still essentially strangers. But a lot of the plot would circle around, covering the same ground or thoughts over and over. In the last book, I got annoyed when the Rogues arrives and diverted attention and page space from the hero and heroine. Here I was relieved.

I figured it all must tie in somehow, and it does, but since I had no bird’s-eye-view on how this would happen, I couldn’t spot clues and put them together slightly before the characters and think “Ah-ha, now I can see why that was important.” While I generally dislike storylines that are telegraphed ahead of time, I also like some hint that will make seeming random events more interesting to read about as they unfold.

Braydon ends up leading the investigation into a possible assassination attempt on several of the Royal Princes with a little help from a few of the Rogues. The limited number of them worked well and kept them from overwhelming the story. The resolution of this aspect of the book, while not as dramatic as in the last book, is believable and, as I mentioned earlier, driven by actual events.

The romance arrives by the conclusion but given the short time span of the novel and past experiences of both Braydon and Kitty, as well as their lower expectations of love in marriage, I would have been satisfied with a HFN with clear signs of future budding love instead of the swift “I love you’s” here. The overall grade is one of those “balance this with that” and ends up a C+ for me.