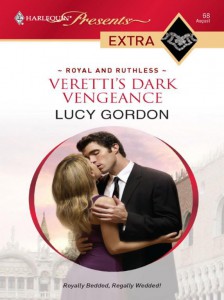 When the story first started, I thought for sure this was going to be the standard HP with the hero jumping to conclusions about what a slut the heroine was when, in truth, she is this shrinking violet innocent despite her knock out body.

Instead, I’m treated with a strong battle of the sexes where, more often than not, the heroine holds the upper hand and the hero ruefully acknowledging that he is putty in her hands. Helena doesn’t mince words with Salvatore:

"Everything I can remember. If I forget anything I dare say you'll remind me.'

"Please-‘do we have to go into that?'

"I think we do. Surely you're not asking me to spare your blushes. Or is it mine you're trying to spare? "A smart miss on the make-‘married him for his money." Why don't you just call me a prostitute and have done with it?'

She had the pleasure of seeing that her frankness made him uneasy.

"Let's say instead a very clever lady,' he said.

"No, let's say prostitute because that's what you meant. Have the courage of your convictions. If you're going to call me names, do it to my face.'

"No, you prefer doing the bullying.'

Helena marries Antonio, a man much older than her, and when he dies, she inherits a Murano glass making firm. Antonio’s younger cousin, Salvatore Veretti, owns a rival Murano glass making firm and intends to buy Helena’s firm by crushing her. Instead, Salvatore finds himself intrigued, bemused, and entangled in Helena. Helena is the renowned model, Helen of Troy, who made a fortune with her figure and face and dropped out of modeling two years ago. Helena wanted to try her hand at being a business woman.

The Venetian setting was integrated into the story. Venice is portrayed as a small community whose gossip line is more efficient than the local bridge club.

Antonio had told her about the Venice grapevine.

"Whisper a secret at one end of the Grand Canal and it'll reach the other end before you do,' he'd said.

One thing I found disconcerting was how quickly Helena, the heroine, was able to arrange big modeling jobs to save her company. I know modeling is a tough market and Helena is kind of old (32) for modeling in the story. But HPs are built on creating fantasy and I guess that it played only a minor part.

The middle section is the best as the two try to one up each other while it is bookended by infodumping set up in the front and big misunderstanding at the end. Overall, though, a decent and quick HP read with a fun heroine. C+