I’ve had pretty good luck with the Brazen line from Entangled Publishing so when this new release came out, I bought it immediately. I was even further thrilled to read that this book featured a fem dom, unfortunately the progression of Heather’s story left me with keen disappointment when the storyline abandoned Heather’s newfound sexual proclivities for sexual dominance. 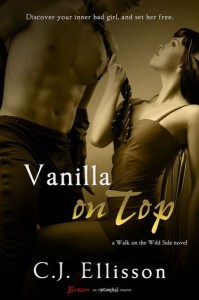 Heather attend a speed dating event with her best friend Carla. She feels a little morose because she has had very bad luck at dating and that she won’t have as much of an opportunity for finding a good dating candidate as the less pretty girl between her and Carla. When an attractive man sits down opposite of her and takes a phone call, Heather is less than impressed. But when Tony admits he’d like someone to take control, Heather acts impulsively and demands that he turns off his phone. The two then engage in torrid physical encounter on the patio of the bisro where the speed dating event is being held.

I was a bit taken aback by Heather thinking so unkindly about the men in the speed dating room, particularly when she felt that no one would be interested in her because she felt she was less than pretty. Having not spoken to even one of the guys in the room, Heather makes the snap judgment that there are only three “decent ones” in the room. She encourages herself by noting that she’s younger than most of the women in the room and that will give her a leg up.  That Heather, who feels judged because of her looks, lacked any self awareness of what she is doing makes this even worse.

Makes me wonder—what’s wrong with these guys if they can’t find a date on their own? Shut up, Heather! I scream at myself. You sabotage everything before it even starts!

Um, Heather, you are at a speed dating event. What is wrong with you? Actually what is wrong with Heather is that she lacks self confidence. Through her relationship with Tony, Heather begins to gain confidence and as a result begins to notice the looks of appreciation from the opposite sex that she hadn’t seen before. Unsaid is whether those had always existed and Heather did not recognize them or that her aura of self possession drew new attention. Perhaps it was a mixture of both.

There is a sweetness in how Heather’s control over their dating relationship makes normally confident Tony unsure of himself; how he’s disappointed she has canceled plans on him. I liked that she could turn him down, say no, live a life separate.

Unfortunately, at some point in the book, Tony takes control of the bedroom situation and becomes the dominant. This was unfortunate for two reasons. First, when Tony was the sub he came to the realization that he was in control of the bedroom machinations by allowing Heather to dictate to him time, place, manner, etc. When Tony becomes the dominant in the bedroom, there is no reverse realization by Heather that she is holding the reins (from the bottom). I ended up doubly disappointed. Not only was the femdom story not brought home, but ultimately Tony is charge regardless of whether he is on the top or bottom.

The non bedroom antics provide an additional layer of conflict and the resolution of the business conflict was much more satisfying.  Heather’s firm is being targeted for takeover by Tony’s firm.

The story is written in alternating first person present tense. It isn’t my favorite, but I thought the narrative voices of Heather and Tony were different enough to provide a good contrast.

“You need a condom.” The frantic gerbil-wheel of my mind draws an utter blank. I think I might have one in my wallet, but I’m not sure….She looks at me with raised eyebrows and I nod, unsure I can make anything but an unintelligible grunt right now.”

I also liked the prettier friend dynamic.  Both Heather and Tony had good friends who became jealous when Heather and Tony changed from their predictable roles.  Heather was the less attractive (or thought she was) friend in the pairing with Carla and Tony was always the guy ready to have fun.  When Heather grows confidence in herself and begins to have a more exciting life than Carla, Carla begins to interject some negativity.  When Tony begins to settle down with Heather, his friend begins to suggest that Tony has lost his edge.

It was interesting that Tony refuses to share intimate details with his friend because he knows that women don’t like that but Heather shares everything with Carla. The double standard had me uneasy.  I’m unsure if all the role reversals / inequalities were done on purpose, but they made me think about some gender expectations.

→ Jane
Previous article: Wednesday news:
Next Post: What Janine was Reading in October, November, and December of 2012