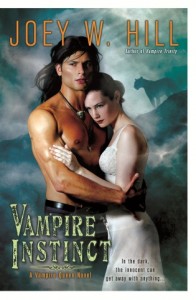 I’m not one of those reviewers that gives a really long recap of the plot line, so here’s my attempt at a cohesive summary. In A Vampire’s Claim, we met Lady Danny and Dev. Danny had a servant – a cute, roly-poly little serving girl who was brutally raped by a vampire fledgling and left for dead. This serving girl also had to watch helplessly as the man she loved was murdered in front of her by the same vampire fledgling.

Vampire Instinct starts out about a month or so after that book ended. Elisa, the cute serving girl, is in traumatic shock from the attack, and Lady Danny doesn’t know what to do with her to snap her out of it. Compounding the problem is that Elisa is attached to the remaining vampire fledglings that were captured. She feels they are children that need reforming, not animals to be put down, as most vampires think of them. Lady Danny reaches out to Malachi, a Native American vampire that runs a big cat rescue preserve on a remote island, and asks him to help both Elisa and the fledgling vampires, as he’s good with rehabilitating wild/abused animals.

It’s been a few years since I read A Vampire’s Claim, and I have to admit, for the first 50 pages of Instinct, I was totally clueless as to what was going on. As an author, I think you have a weakness when it comes to the beginning of the book and pulling the reader into your story. With the exception of Beloved Vampire (which I loved), I find all of your books a little tricky to get into. I know once I get past that initial hump, I’m going to enjoy myself. It’s just getting past it.

The hero in this book is Malachi. He doesn’t act like the regular vampires in your series. He’s a made vampire, so isn’t at home with the aristocracy. He’s very in touch with the wild animals in his home and prefers to hide out on his island, away from the world. He thinks the fledglings need to be put down, but he knows that if he destroys them, it will in turn destroy Elisa, and he doesn’t want that to happen.

As you can guess, Elisa and Malachi are attracted to each other. Part of Mal’s job is to bring Elisa back from the brink after she’d been raped, and so he’s trying to make her feel things again. As heroes go, he’s perfectly fine – alpha when he needs to be, patient with the heroine’s occasional shenanigans, and in control of all he surveys. I didn’t feel a real connection to him throughout most of the story, however, so I never felt that it was his story.

The story itself is Elisa’s – her learning to live again, love again, and then be a dutiful vampire servant and all it entails. Honestly, she is my main problem with the entire book.  I am not a fan of wallowing books. Elisa? She wallows. First she’s wallowing in the aftermath of her rape, which I understand. But then she’s wallowing in pain, thinking her ‘children’ (the vampire fledglings) will be destroyed. Then she’s wallowing because she’s not sure Mal loves her. Then she’s wallowing over yet another plot point, and another. And through the whole book, while falling for Mal, she wallows in pain over the man that she loved that murdered, and she thinks of him every time the hero touches her. This annoyed me, a lot. I want the heroine to be in love with the hero, not constantly thinking about another man that was taken from her. About halfway through, I started to get annoyed. I looked down at the percent-read on my kindle and was actually dismayed to find out that I was only 50% through. Surely Elisa wouldn’t wallow for another 200 pages? I didn’t have the intestinal fortitude for that.

Luckily for me (and poor suffering Mal), the second half of the book picks up quite a bit, after Elisa becomes Mal’s full fledged servant in all ways. The sex picks up, the vampire politics picks up, and the story becomes about a lot more than just Poor Elisa. One of the things I like best about your vampire books are that the vampires are truly scary at times. They are not just your average gangsta thug hero with fangs who is a teddy bear when the heroine flashes him a little pink. They are cold, merciless creatures that live in a political and social world that is cruel. The servants that obey them exist only to please them, and nothing is off the table. There’s something a little alarming as well as fascinating in that aspect. For me, the first half of the book didn’t play up to the strengths of the series like the other books do. Mal fights hard not to be like those other vampires. When they are finally pulled into the vampire world in the second half of the book, my interest perked quite a bit.

There were still a few sour notes, though. I didn’t feel like Elisa was at home with Malachi in the vampire world, and that was jarring to read. When he instructs her to do things that other servants do, she agrees but is utterly sick at the thought. How are they going to be a couple if she cannot function in the vampire world? Granted, he asks her to do some pretty intense things (which I won’t spoil, but if you have read the other books in the series, you know what I am talking about) and then afterward she is sick. It made me troubled for their HEA for a while, though I think eventually those fears are mostly soothed away. Mostly.

As always, the sex is hot, the characters are raw and the world is fascinating. However, I don’t feel that this is your best book or showcases your talent or imagination as well as it should. I couldn’t put it down when I was reading it, but now that I am done with it, I’m glad I don’t have to spend more time with Elisa, the heroine. I think I missed the books you put out last year (a two-parter, and I avoided them specifically because of that) but reading this makes me want to go back and see if those are closer to the dark, erotic stories that I was hoping for.  This one is close, but not quite what I wanted.