REVIEW: Up in Knots by Gillian Archer

KatiC+ ReviewsContemporary / D/s / Erotic-Romance / ShibariComments Off on REVIEW: Up in Knots by Gillian Archer 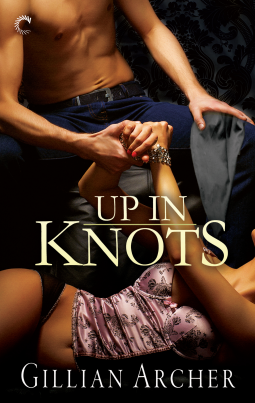 Book two of The Pleasure Code

After the loss of her Dom and first love two years ago, the time has come for Kyla to again allow herself the pleasure of giving up control. She isn’t looking for anything serious yet, just the comforting embrace of rope and a firm hand on her body for the night.

Rope-top Sawyer is extremely skilled and he doesn’t do relationships—but he’s fascinated by the gymnastics instructor who approaches him at a kink con. By the end of the day he’s vowed to help her feel submissive pleasure again, and to introduce her to a few Doms she can choose from.

But as Sawyer breaks down Kyla’s emotional defenses, his barriers also come down. Soon he can’t imagine giving Kyla over to any other Dom—and Kyla can’t imagine being with anyone else. When their feelings are put to the ultimate test, they’ll learn that while taking risks in the bedroom is easy, taking risks in love is terrifying.

Kyla is struggling, her love, her Dom, Adam died two years ago, and since then, she’s been empty. Although she’s tried dating, she needs the comfort of submission to feel fulfilled and has decided it’s time to dip her toe in the water to see if she can find what she needs. She decides to approach a renowned rope-top named Sawyer. She knows that there will be no entanglements with Sawyer, as he’s famous for his one night stands. But Kyla is looking for someone who will dominate her, and the idea of Shibari, which Sawyer is well known for his expertise in, entices her.

Sawyer is immediately attracted to Kyla, she’s a former gymnast and her flexibility and willingness to play make her the perfect partner for an evening’s worth of fun. But when they go for a bite to eat to negotiate terms, he sees shadows in her eyes. And when he gets her to his house to begin a scene, and she breaks down in tears, he realizes that she won’t be a one-night stand. He can help her work through her overwhelming sadness at the passing of Adam, and help her get ready for a relationship with a new Dom. But as they grow close, and Kyla grows stronger, he realizes that she’s a woman who he could have a future with, if he’ll only take the chance.

This is a category length book, and while I enjoyed it quite a bit, I felt like it was quite rushed. Sawyer was interesting, but I’d have been so much more interested to know how and why he got into Shibari. He has a vague past and a bad relationship with his family that is alluded to, but never explored. I felt like more could have been done to make him more enticing to the reader. He’s obviously conflicted by what he feels for Kyla, but mostly, the reader is just told this, it’s never delved into, which I’d have liked to have seen. Kyla has siblings, who she is obviously close to, although they didn’t seem to serve much purpose on the story, except perhaps to show that she did have some support system. The story is mostly about her struggle not to become attached to Sawyer, which  of course happens in the end, because this is a romance.

The sex scenes are spicy and varied, and while I felt like they didn’t explore Shibari very completely, I attribute this partially to the shorter length of the book. For the most part, this book was an enjoyable read, although one that left very little impression on me. But I’m not 100% sure if that’s because of my preference for a longer length book, or if it’s because so much of the storyline was painted in broad strokes, rather than in detail. Either way, my final grade for Up in Knots is a C+.