Thank you for sending me “Unraveled” for review. I have enjoyed (but been somewhat critical) of your past works but your novella, “Unlocked,” was one of my best reads of 2011. Smite’s book was hotly anticipated. Part of the problem I had with “Unraveled” was the result of my own expectations and anticipation. I had created my own vision of Smite prior to “Unraveled” through my glimpses of him in “Unclaimed” and “Unveiled.” Smite, to me, was a closed off man who held rigid beliefs and allowed only his younger brother any kind of intimacy, either physical or emotional. 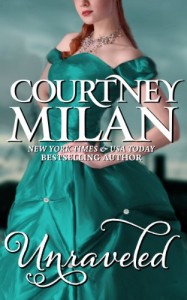 Smite in “Unraveled” met those expectations up until he began to interact with the heroine, Miranda, in chapter 2. From there I felt like I was taking a number of unsupported emotional leaps to get Miranda and Smite together, to get them both past their dark moments, and then into their HEA. I don’t know whether I would have bought into these emotional movements more if I hadn’t had preconceived notions about Smite.

Miranda is wig maker who lives in the Temple Parish, a slum protected by an unknown person named the Patron. If you do favors for the Patron, the Patron provides you with protection. This allows Miranda to live, work, and walk unmolested in this very bad part of town. Miranda is an educated young woman. Her father was the owner of a theater troupe, her mother an actress. Her family fell on hard times when Miranda’s mother died. Bereft of his soul mate, her father goes into decline and the theatre troupe falls apart and the source of the family income dissipates entirely. Miranda has made a meager life for herself and a young boy she adopted from the disbanded troupe. She tries to keep Robbie away from the more unsavory elements in the Temple Parish but as he advances in age (12) it becomes increasingly difficult.

As part of her deal with the Patron, Miranda uses her experience in the theatre to create different personas and she uses those personas to get disadvantaged youth out of trouble with the magistrates. Unfortunately, one of those magistrates is Smite and he recognizes her through her paint, her wigs, her clothes as someone who had appeared before him previously in a different incarnation. Smite takes his job seriously to treat the poor and the rich, the pretty and the misshapen, all with the same measure of justice unlike the other magistrates who either view justice as something to be sold or are too lazy to work at finding the truth. He knows that she is about to perjure herself and prevents her from doing it. He also seeks her out to impress upon her that she must stop or he will enforce justice upon her.

But there is something about Miranda that Smite finds compelling. So compelling that within a short time after meeting her, Smite offers to make her his mistress for a period of thirty days. Smite explains that he will set a time limit because he only allows himself a rationed amount of sentimentality.

Despite the fact that she is a virgin and despite that she slapped Robbie across the face just a few pages back for accusing her of selling herself to Smite, Miranda is delighted by Smite’s offer and moves into his newly purchased house forthwith.

I’m baffled. Why didn’t she sell herself before? Why was she so angry at the suggestion of selling herself but then readily accepts Smite’s offer? At one point, Miranda is described as “happier when your relationships can be framed in terms of commerce.  You never accept help from anyone.”  If that is true, I didn’t understand why Miranda didn’t choose the courtesan/mistress option previously. Was it simply not an option for her?

And what is it about Miranda, this person who does not have the same strict interpretation of the law, that attracts Smite to the point that he acts out of character?  Later I understand that Miranda moves Smite in ways he didn’t expect because she doesn’t try to fix him; because she doesn’t see him as flawed or broken or something to be changed.

“My brother. Mark.” He twined his hand with hers. “There is no former mistress, Miranda Darling. There have been affairs, mind, but they never lasted long. Usually, she decides I’m stoic and cold only because I have been unlucky in love. She thinks she’ll be the one to melt through my defenses. She thinks that she can fix everything that is wrong with me by simply weeping over me. It lasts until she realizes I won’t spend the night, she can’t touch my face, and I despise women who weep for no reason. I have no tolerance for maudlin affection, and less for women who want to fix me.”

“Fix you?” Miranda said. “Why would anyone need to fix you? You’re not broken.”

“That’s precisely what I’ve always said.” He slid down to lie next to her. “Oddly, few people ever believe me.”

“I know what broken is,” Miranda said. “My father was broken, after my mother died. He just stopped working. He wouldn’t sleep. Wouldn’t eat. Wouldn’t even get out of bed. He just lay there and cried.”

“Good heavens. How long did it last?”

“I told you I know what broken is. That is broken—staring at the wall and weeping, while creditors hammer on the door and your troupe slowly slips away, stealing the best costumes in lieu of wages. When your friends leave you and you still cannot move, and nothing your daughter says can break you out of the spell. No man is broken because bad things happen to him. He’s broken because he doesn’t keep going after those things happen. When you told me about your mother, and how it made you resolve to be the person you are… What I thought was, ‘Yes, please, I’ll take him.’ Because you didn’t break.”

There was a pause. He propped himself up on one elbow and then picked up the watch he’d left on the bedside table.

“Would you know,” he said, his tone a bit more businesslike, “this conversation has officially exceeded my daily quota for mawkish sentimentality. That’s it, then.”

“Quota?” she said. “What are you talking about?”

“My sentimentality quota. There’s a limit as to how much sentiment I will tolerate in a day. I’ve just reached it.”

“It’s not—” she glanced at the watch in his hands “—not yet three in the morning. And this is…a special occasion.”

“Nevertheless, we’re done. As much as my pride loves to be puffed up, I’d appreciate it if you could refrain from further compliments. And definitely no protestations of love—that would put me off for a good long while.”

There were portions of the book I loved, including the dialogue exchanges between Smite and Miranda.  Yet, I didn’t understand why Smite was suddenly telling Miranda all his secrets.  Or maybe his past, his night terrors, his fears, weren’t secrets.  They seemed secrets in previous books but maybe they were just secrets in previous books to build suspense for this book?  The speed at which Miranda and Smite fell in love; the speed at which Smite unbent; the speed at which Miranda fell into Smite’s bed, all happened too fast for me.   I felt like I understood where you wanted to go in your book such as awaken a character to how the rigidity of one position could be harmful but I never felt convinced once I got there.  The movements from emotional transition to emotional transition were missing.

I also was taken aback by the numerosity of love scenes.  For a great portion of the middle part of the book I felt like it was one love scene after another and while it was well done, I wasn’t sure why the movement of the book took place in bed for large swaths.

I did like the contrast between the justice handed out by the Patron and that by Smite, that justice done in secret and in the dark was unstable and uncertain and didn’t actually achieve the goals it sought. Justice shouldn’t make someone like Miranda afraid.  That part of the book was well conceived from beginning to end.   The prose is lovely in the book. I loved the dialogue.  I thought that the questioning of the concept of justice and who administers it was well done.  It was the romance that felt rushed. C+