REVIEW: Undeniably Yours by Shannon Stacey

Earlier this year, on Smart Bitch Sarah's recommendation, I read and enjoyed your first Kowalski book, Exclusively Yours. Your new release, Undeniably Yours, continues the adventures of the dynamic Kowalski family with Kevin's story, an entertaining chronicle of the handsome young Kowalski's unexpected leap into family responsibility. 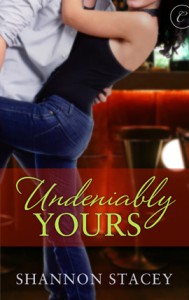 The youngest of a close, raucous family, Kevin was a cop in Boston before a disastrous discovery involving his wife and his captain ended his career and brought him home to New Hampshire as a successful sports bar owner. All of the Kowalski siblings seem to have inherited the trademark dimples, although none seems to use them more advantageously than Kevin, whose post-divorce life has included a series of uncommitted liaisons and an unending stream of lipstick-bussed cocktail napkins. But when he spots Beth Hansen at the bar trying to fend of her drunk and groping date, he's intrigued enough to intervene on her behalf. Unfortunately, it does not end well, and Beth walks out of the bar and, seemingly, out of his life forever.

Until they meet unexpectedly at Joe's wedding, where Beth is bartending. And this time, Kevin is determined not to let Beth slip away. Which goes very well for most of the night. But this, too, does not end well, and Beth, once again, walks out of the room and seemingly out of Kevin's life forever.

Except for the fact that despite having safe, responsible sex, she and Kevin conceived a baby that night. Which, Beth is afraid, will not end well, either.

A habitual wanderer, Beth would have already left New Hampshire for Albuquerque were it not for the positive pregnancy test and only one possible paternal option. And in a refreshingly honest and straightforward move, she goes to Kevin and tells him that she is pregnant. No games, no coyness, no hand-wringing indecisiveness. And in another refreshing move, Kevin is surprised but accepting of the news, not accusatory, irresponsible, or weasely. Make no mistake: this is a novel about two adults struggling to adapt their lives to unexpected pregnancy with a near stranger and the muddled possibility of a romantic happy ending.

If I were evaluating this book solely on the concept, it would be an unequivocal winner for me. I loved the idea of two decent people working to come to terms with such difficult and unanticipated life changes, which were not the product of anyone's irresponsibility or neglect. So often in Romance, we have heroines hiding babies from the hero (without any investigation of how selfish that is, both to the hero and the child) or heroes insisting they couldn't possibly be the father of the heroine's baby, that it's easy to forget that there is plenty of emotional drama between two people who genuinely like each other and are not in denial about an unplanned pregnancy. For Kevin and Beth, that tension settles around the question of whether they are romantically compatible or just conveniently available.

For an independent vagabond like Beth, whose parents are a bit too clingy for her comfort, a baby is grounding enough, but a romantic relationship with Kevin is downright intimidating:

"I was going to Albuquerque. That's where I was going to go next, but then I met Kevin and I was stupid enough to sleep with him and now everything's different. My entire life is different and upside down and I'm tied to him forever because he's going to be a great dad.

He overwhelms me and I'm already so overwhelmed I don't know what to do. I can't think straight when I'm around him, but what we do will have such a huge effect on the baby's life. And I just don't want to spend my life wondering if Kevin really wanted me, or if I was just the first woman to give him a child."

Kevin, though, wants to be fully involved with Beth, whether or not they end up happily ever after:

But did he love Beth?

How the hell was he supposed to know for sure? It's not like there was a quiz he could take. Or a checklist or a Ouija board or a pie chart or any other damn definitive way to tell.

So in the meantime, why shouldn't they take advantage of the fact that she couldn't get pregnant again and be a real couple? Kevin doesn't need the kind of emotional guarantee that Beth does, and the fact that Beth knows that Mike and Lisa Kowalski faced a recent crisis in their marriage over Lisa's fear that Mike only married her because she was pregnant and would leave her when the kids got older makes her even more doubtful of Kevin's feelings. And her own. Because Kevin is part of a large, rowdy Kowalski family package, and his parents are even more inclined than Kevin to take over. Between Kevin and his family Beth feels like she has no autonomy – they convince her to move into Kevin's office/apartment building; they physically move her stuff from one place to another in the space of a morning; they make sure she's watched over by every member of the Kowalski family; they concoct a scheme to get Beth to work in the bar for Kevin; they plan a ginormous baby shower and insist on buying everything the baby might need and more; and they immediately treat her like a member of the family.

For a while, these issues provide both tension and amusement. Like when Kevin insists on bringing Beth to Thanksgiving and she isn't sure she wants to go:

She didn't look exactly thrilled with the invitation. "I told you we're not seeing each other anymore. There's no relationship, which means no taking me home for the holidays."

He wasn't about to give up that easily. "The baby wants to come home with me for Thanksgiving."

"Yes, he does." She rolled her eyes, but a smile tugged at the corners of her mouth, so he kept going. "Ma makes this stuff with yams and marshmallows. It's delicious and I'm pretty sure the baby wants to try some."

Through the course of an entire novel, however (despite the fact that Undeniably Yours is not as long as most traditional single title books), the conflict is just not enough to sustain that kind of tension between two characters who are presented as responsible and even-keeled. For example, Beth's extreme resistance to Kevin's overtures makes perfect sense at first, but after months upon months of his dogged loyalty, nurturing, caring, and sexual attraction, it seems forced. At some point I felt Beth was either being unreasonably stubborn or that there was something seriously wrong in her past or her other relationships that would keep her from emotionally committing. Her loving but somewhat overprotective parents just did not explain her wariness, and yet there is nothing else to suggest that she has deep trust issues. Similarly, Kevin's impulse to push the relationship seems somewhat reckless, which makes his saintly patience with Beth all the more of a logical stretch. At one point Beth neatly sums up the cycle of the relationship:

[Beth is "prickly" to Kevin]. She'd have to apologize to him later and he'd be all understanding and they'd start the cycle again. Friends. Then he'd start pushing a little. Then a little more, until she had to back him off. Then she'd feel bad and try to make him understand. He'd claim to and then off they'd go again.

And again. And again. But given Kevin's past – his reckless, uncontrolled reaction to his ex-wife and his captain, I knew there was a more temperamental guy under that exterior, and at some point I expected him to emerge. In fact, I kind of wanted him to emerge, because at least it would provide some reasonable basis for Beth's continued resistance, as well as something Kevin could struggle with within himself. The drama that does eventually befall Kevin and Beth is somewhat predictable by Romance novel standards, although fortunately it is not handled with excessive melodrama. Still, I needed more drama overall to buy the delayed emotional gratification.

I don't want to say that Undeniably Yours is too realistic, because fiction does not abide by the same rules as real life – it requires more consistency and clarity of motivation, for one thing. And besides, I appreciated so many of the moments of realism in the novel, that I did not yearn for over the top melodrama. Still, there was a point where the realism became a bit mundane, flattening out the emotional potency of the romantic relationship and making the relationship tension feel forced and thin. As much as I loved the concept of the novel and liked the characters, I did not find it as emotionally compelling as Joe and Keri's book or as poignant as I would have hoped given the baby and family issues. And as in the previous book, there is a secondary romance that is fraught with much more emotional drama and resolved with much more dispatch than the central relationship, highlighting, once again, some of what was missing for me from the central drama. Had the emotional intensity of those two relationships been flipped, this book would have been a strong winner for me. As it is, I enjoyed it, but more for the time I could once again spend with the Kowalski family, and not so much for the romance, per se. C+