I have described your Avon historicals as a “guilty pleasure,” but such a description undervalues their strengths, one of which is the romantic suspense subplot, which often engages me more than the romance itself. Still, the heroines tend toward stubborn and feisty, and the heroes toward dark and tortured, while the drama is high and the history, well, the history is definitely not why I read them. Somehow I managed to miss last year’s book, so I was especially excited to read This Perfect Kiss, because sometimes I crave a more old-fashioned Romance novel, and I find your books tend toward that experience. Unfortunately, This Perfect Kiss was not a perfect read for me, although I did enjoy a number of the novel’s elements. 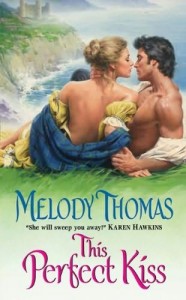 At 17, Christel Douglas believes herself to be in love with Camden St. Giles, a young captain in the Royal Navy and heir to the earldom of Carrick. When she shares a passionate, stolen kiss with the young officer, Christel believes that if he knew who she was beneath her homemade costume of gold taffeta dress and bejeweled shoes, “England’s hero” would want nothing to do with “the bastard daughter of an adulterer.” And, as her half sister Tia gleefully informs Christel upon finding her at the masquerade ball, Camden is nearly engaged to Christel’s beautiful and legitimate cousin, Saundra. So Christel flees before Tia can reveal her secret, while Camden goes on to marry Saundra.

Almost ten years later, everyone’s lives have been dramatically changed by personal tragedy and war. Saundra bore Camden a daughter before she mysteriously plummeted to her death from one of the light towers on the Carrick estate. Having been gravely wounded and militarily disgraced in Yorktown, Camden is now passionate about only two things, both named Anna: his daughter and his commercial ship. Bitter and world-weary, Camden is loath to return to his Scottish estate, Blackthorn Castle, where his dictatorial grandmother and his reprobate brother, Leighton, reside, especially since Leighton is rumored to have been Saundra’s lover and the father of the child she miscarried shortly before her death. But when a woman claiming to be his late-wife’s cousin boards his ship in London, Camden is immediately taken back some nine years to that masquerade ball at which he kissed the lovely Christel Douglas, before she inexplicably fled Scotland for the colony of Virginia, where her uncle lived and fought for the colonial cause.

Christel was shocked to receive a letter from Saundra begging her to return to Scotland to take up governess duties for Anna. Since Saundra has now been dead two years, the provenance of the letter is even more mysterious, although Christel is still urgently trying to fulfill its request. Widowed herself, and without any money, Christel boards Camden’s ship dressed as a man and accompanied by a dog who adopted her on the London docks. It is not the first time Christel has seen Camden in nine years; after all, it was her uncle’s ship that rescued him and what was left of his crew from drowning after the disastrous Yorktown battle, and while he lay delirious in a Yorktown field hospital, Christel had nursed him until her own husband became ill. But she has no idea that Camden has spent the last nine years with a souvenir of that night at the masquerade ball – the golden shoes Christel had so proudly created and then watched Tia throw over the cliff at the edge of the Carrick estate. And now that they are isolated on the Anna, Christel and Camden have plenty of time to become reacquainted without any masks or costumes.

There is quite a bit of interesting backstory in This Perfect Kiss, much of it political. Christel has fought for the colonial cause against the British and through her dress shop in Williamsburg was able to gather information for the cause. Leighton, Camden’s younger brother, is involved in the black market trade of brandy and weapons, and it is widely believed that he was Saundra’s lover and perhaps even a traitor to the Crown. Following Camden’s military humiliation and devastating wound, Camden has entered the commercial shipping business with his close friend, Jacob Westmont, a chief magistrate and staunch loyalist. Renewing an association with Christel puts Camden in a precarious position regarding his own political and commercial interests, as well as testing the bounds of his friendship with Westmont. Christel’s past, much of which she does not initially reveal to Camden, also implicates her much more deeply in colonial politics than he ever would have suspected, and once he brings her back to Scotland, he is inadvertently inviting unwelcome official scrutiny into his and Christel’s families and properties.

On the surface, at least, there is quite a bit of ambitious political detail in the book, and because the novel takes place a mere year after the Treaty of Paris, the political context is both crucial and multi-layered to any story set in this time. Beyond the obvious political opposition between the British Crown and the newly formed American nation, there is Scotland’s complicated position economically and socially. Economically, Scottish shipping industries were imperiled by the War, while politically and socially, the revolutionary spirit of the colonists was an appealing ideal. Enlightenment values – the rise of individualism, reason-based philosophy, natural history, republicanism and the social contract, etc – were radically changing the way people thought about and viewed the world, and there is a distinct ethos characteristic of that period, even as it varied somewhat from country to country.

Unfortunately, despite the complicated backstory in the novel and the extensive political and historical references, This Perfect Kiss did not, for me, possess that late 18th century ethos marking it as a product of the momentous changes taking place during this period (and the attempts to mimic period speech with the “ayes” and the “nays” didn’t work for me at all). In fact, once Camden and Christel arrive back in Scotland at Blackthorn Castle, there were large stretches of the novel that felt very much like a Regency or Victorian historical, by which I mean the Romance genre’s interpretation of a Regency or Victorian-set story. A small example: while I appreciated the absence of women’s drawers (18th C women didn’t wear them) and the reference to shifts and stays (although “corset” is referenced in the prologue), the complexity (and width!) of women’s wear during the period never came through to me. Nor did the complexity of the changing political, philosophical and social views. I will say, however, that I was incredibly grateful for the absence of horrible Scottish accents, kilts, references to “savage” or “noble” Highlanders, and other terrible and inaccurate Scottish stereotypes.

In terms of Christel and Camden’s relationship, the surface/substance relationship is reversed. Superficially, at least, Christel and Camden would have been a bad match nine years ago – she, the bastard daughter of a Scottish lord and a colonial woman of no status – but now their pairing seems as if it would be disastrous. Christel has been involved with the Sons of Liberty, while Camden fought for the Crown. Both have been embittered by war and loss. And Christel still has no social status to offer the seventh earl of Carrick, let alone any apparent inclination to play the accommodating countess. On a deeper level, though, these two deeply wounded individuals, both rebels in their own way, have the potential to heal each other and properly value the fragile gifts of love and happiness.

Camden has been reluctant to stay in Scotland and assume residence as the Earl of Carrick, the sordid tragedy of his wife’s death and the pressure of his grandmother to marry again unwanted burdens. For all of his responsibilities – to his daughter, his crew, his family, and his earldom – Camden has been deeply burned by his own loyalty, and he finds it much easier to remain on his ship, where he has a smaller world to oversee. Christel, on the other hand, had always been a partial outsider and a rebel, and she refuses to count on anything in life being stable or secure, including her youthful infatuation with the handsome earl. Still, she cannot help being drawn to the wounded man, just as she has been drawn to other difficult and dangerous causes:

For most of her life, it had been easier to run from the frailties of her heart than to confront her own vulnerability, but there was something fragile about a man of the world who suddenly did not seem so worldly in all things. A man who loved his daughter and wanted to know his child better, who had been betrayed by his wife and brother and—if Christel really wanted to list all the evil culprits in his life—who had also been betrayed by the Crown he had served so loyally for so many years.

He was a man who’d used every situation to his own advantage, a strategist who’d played life like a game of chess or one of his naval sorties but who had suddenly found the new territory he was now sailing unnavigable.

Although I tend to like the ‘damaged hero and heroine save themselves through their mutual love’ device, with all of the extra baggage heaped on Christel and Camden throughout the novel – the mystery of his wife’s death, the implications of Christel’s social position and her political activity, the questionable activities of Leighton, etc. – the external obstacles are responsible for dramatic tension to sustain the reader’s interest. However, the sheer number of issues implies that resolving those difficulties should be no easy thing. Without issuing spoilers to the several mysteries that build over the course of the novel, I will say that the several substantial obstacles to Christel and Camden’s ultimate happiness seem almost magically resolved, deflating much of tension they originally created and diminishing their importance.

This Perfect Kiss is a very difficult book for me to grade, because I found its own ambition to be the ultimate source of its undoing. The political issues were plentiful but not resonant in the book, and the emotional issues were not incredibly inspired to begin with, and were ultimately hampered by the creaking weight of the backstory and the historical context, as superficial as it was. For all the details present in the book I was bored through a good deal of the novel, and as much as I liked Christel and Camden, I never convincingly felt the danger of their situation nor the depth of their suffering. As much as the novel gave me superficially, I kept wanting more substantively, and consequently, while I didn’t dislike This Perfect Kiss, it was far from a perfect reading experience for me. C+

→ Janet
Previous article: On the State of the Epilogue
Next Post: REVIEW: Hearts in Flight by Patty Smith Hall