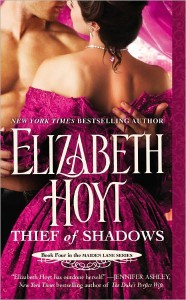 However, while “Thief of Shadows” was an enjoyable read, the mutability of the hero, Winter Makepeace, diminished the emotional power of the story.

Winter Makepeace is the schoolmaster and manager of the Home for Unfortunate Infants and Foundling Children. It has recently received a large influx of cash from a coterie of new patrons, particularly one Lady Penelope. She is displeased with Winter’s performance because he seems unfit to consort with society and raise additional money for the charity.  Lady Isabel, Barroness Beckinhall, disagrees. While she finds Mr. Makepeace a bit stodgy and uptight, maybe even rude, she recognizes that he does a good job for the Home and she offers her services as a social tutor.

Winter reluctantly agrees to this because he believes manager of the Home is his calling.  Being the manager of the Home is so important to home that he has eschewed the pleasures of the flesh.  He makes an impassioned speech to Lady Beckinhall when she questions why he cares so much and why he is still a virgin.

He glanced down at her, so beautiful, so full of that life. “No, I don’t believe so. A husband and father’s first duty is to his wife and family. Everything else is secondary. How can the people of St. Giles ever come first if I am married?”

Her eyes widened in astonishment. “I don’t believe this. You’re attempting to become a saint.”

His mouth tightened. “No, I’ve merely dedicated my life to helping others.”

“I’ve told you why,” he said, trying to still his impatience. This discussion was like cutting open his chest, putting a hand in, and stirring his organs about. He did not like it at all. “The children, the poor of St. Giles, the terrible lives they lead. Did you not hear me when I spoke?”

“I heard you well enough,” she snapped. “I’m asking why you. Why must you be the one to make this sacrifice of your entire life?”

He shook his head helplessly. She was of the privileged class. She’d never known want, never counted coins to calculate whether they should go to pay for coal to warm the body or bread to feed it, for they would pay for only one, not both. She simply could not understand.

Winter dropped his hand from her arm and stepped back, putting prudent distance between them. His voice was carefully modulated when he spoke.

Carefully gentle. “If not me, then who?”

This was a beautifully expressed sentiment and his rigid control over his life, his abstaining from the pleasures of the flesh, his almost ascetic lifestyle made sense against this backdrop.

While there were some nods toward the pygmalion set up, the real crux of the book is about the Home, lost children of St. Giles, and Winter’s dangerous capers as the Ghost of St. Giles, a sort of avenging angel in St. Giles that is there to protect the poor and helpless and was last seen cutting down Charming Mickey O’Connor from the gallows.  The pygmalion plot allows Winter and Isabel to spend quite a bit of time together but otherwise has little impact in the overall story.

Isabel is a rich woman who had enjoyed lovers in the past.  She’s not opposed to letting Winter into her bed, but she doesn’t want to expose her heart to him or to anyone else.  She’s lonely and closed off much like Winter is, only they show it in different ways.  Isabel expresses her loneliness in indifference and casual societal gaiety; Winter by holding himself aloof.

The problem is that Winter is a malleable character in the book, so malleable that the impossible conflict becomes no more difficult to overcome than a divot in the grass.  The deflowering of Winter happens so casually, with so little forethought that it diminishes his lofty principles and reduces the conflict to weightless chaff.  His flirtations don’t match his professed piety.