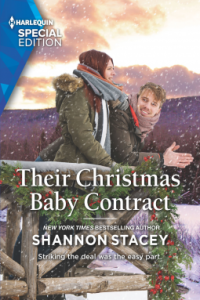 Striking the deal was the easy part.

Brady Nash is handsome and anti-marriage. And with IVF completely out of her financial reach, Reyna Bishop is running out of time to have the child she so very much wants. Theirs is a practical baby-making deal: no emotion, no expectation, no ever-after. They’ll even “date” through Christmas to silence their hometown gossips. It’s foolproof…till the time she spends with Brady and his warm, loving family leaves Reyna wanting more than a baby.

After meeting heroine Reyna in “More Than Neighbors,” I figured she’d be in line for a book. I liked her here as well and also our hero Brady but this is a couple who could have solved their issues – years ago – if only they’d ever communicated.

The book centers on a “childhood friends to lovers” trope but “small town romance” and “not-secret baby” figure in, too. As the book begins, Reyna is publicly humiliated – her words – by her current boyfriend – of three months – asking her to marry him complete with jumbotron images flashing to the entire crowd of the arena. She’d thought he might be suitable – yeah, there’s a passionate description – as a father for her longed for children but she wasn’t ready to say yes so #shesaidno and there was the end of that relationship as well as his character in the book.

Brady knew immediately that this was not the way to ask Reyna to marry you. Which made me question that they’ve known each other since childhood yet she doesn’t seem to know little details like that he’s not really a ladies man. They had a horrible one night stand – or maybe it was just a 1/4 nightstand – but never, ever talked about it afterwards. He never tried for a second chance to make things right or at least give her an orgasm. He confessed to his best friend in grade school that he wanted to marry her but then makes no effort to improve her impression of him? Wuss.

Reyna’s not getting any younger, not loaded with the money needed to try artificial insemination, and depressed at the thought that she’s got to start all over again trying to find a man. She’s got standards and if sticking to them has given her the rep in town of being hard on men, well so be it. Then her brainwave hits and she knows who to ask. They are just friends, she knows his family, and she thinks they’d make a pretty baby. When Brady comes to her business to get an estimate on how much it will cost to get a classic muscle car fixed and back on the road, he gets a proposition he never expected yet can’t turn down.

It’s lucky that two orgasmic encounters later Brady’s sexual skill has been revised in Reyna’s estimation and she’s pregnant because soon these two are talking but still not communicating. There’s a complicated plan to pretend to date so the town won’t gossip about them but then break up before the baby is born. Honestly they put more effort into this than they do talking about little things like all the legal details a lawyer points out they need to discuss. Yeah, those. She’s been charting her fertile days but I’d also have liked some kind of throw away lines about how Reyna had already been to see her doctor and started taking those whopping pregnancy multivitamins or that she’d spoken with Brady about her plans to continue running her one woman business once she was in her third trimester and unable to lean far over a car. It is his baby, too. She also doesn’t seem to have thought out what her friends might start asking about her relationship with Brady.

Still, not having done any of these things gives these two more things to not communicate about. They do take to their pretend dating and start to enjoy spending time together, cooking, watching movies, discussing paint chips for the baby’s room at Brady’s house but never talking about their real feelings. But I kind of like that she isn’t suddenly besties with his sister-in-law and double yay that she’s a mechanic who runs her own garage!

Brady and Renya have great relationships with their mothers which I had fun reading about. Brady is a fantastic uncle and in watching him interact with his nephews, Reyna can see firsthand that he will be a wonderful dad. He even makes dad jokes.

He laughed. “You’re literally carrying my child because you know I can keep a secret.”
“True. Well, that and your good genes.”
“Oh, was I wearing my good jeans that day?”
She groaned. “I don’t think you can make dad jokes before the baby’s actually born.”
“I want to be prepared.”

It got a bit frustrating that everyone in town can see that they have feelings for each other but neither one of them will say a word. Later on when the truth comes spilling out and Reyna asks in frustration why he never said a word all these years, I could see her point as it was one that I’d thought of when the book started. Brady does, however, know the way in which Reyna would like to be proposed to and what kind of rings will work best for their professions – I’ll give him that in spades.

There is a major past family issue that needs to be resolved and I’m guessing that this will be the focus of the next book and that I know who the MCs will be. Until then, for readers who love the tropes here as well as seeing MCs who are everyday working people (truly yay!), “Their Christmas Baby Contract” is a nice follow up book in the series and I don’t feel that readers have to have read the first one. C+