Warning: mysqli_query(): (22032/3141): Invalid JSON text in argument 1 to function json_contains: "Invalid value." at position 0. in /home/customer/www/dearauthor.com/public_html/wp-includes/class-wpdb.php on line 2187
 REVIEW: The Woman Who Built a Bridge by CK Crigger
September 17, 2020 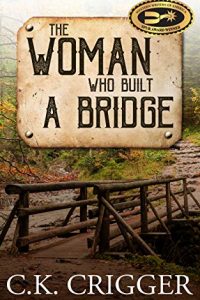 Shay Billings is pleasantly surprised at discovering a new bridge over the river, as it cuts several miles from his trip into town. Ambushed and left for dead, he has even more cause to be grateful when the bridge-builder saves his life. Shay’s savior turns out to be a mysterious young woman with extraordinary skills. More importantly, she’s a strong ally when he and a few other men are forced to defend themselves and their ranches against a power hungry rich man. Marvin Hammel seems determined to own everything in their small valley, his intention to gobble up not only their homes and their livelihoods, but the water that flows through the land.

January Schutt just wants to be left alone to hide her scars. She’s rebuilt the bridge that crosses the river onto her property, and lives like a hermit in a rundown old barn. All that changes when she takes in a wounded Shay Billings. Now she’s placed in the middle of a war over water rights. But has she picked the winning side?

Hmmm, there are elements of this story I really liked. There are things about it that had me literally yelling at my ereader in frustration. Still, when thinking back on it, the way things are done by the main characters probably shows their humanity and the fact that they’re not stone cold killers. Which has to be a good thing.

As in “The Yeggman’s Apprentice,” the setting is turn-of-the-20th-century western America when new-fangled things are almost unknown novelties (here it’s automobiles and the promise of electricity) in a west that is still a bit wild and rough but obviously on the way to being changed. The main rough thing is the fact that men who think they can are still making land grabs and the hell with anyone standing in their way.

January Schutt is a strong heroine who astounds the men who enter into her life. She’s trying to keep her head down due to past events in her family (CW – domestic violence, violence to a child) but events are overtaking her that won’t let her keep doing that. Few people know she’s returned to the family homestead nor that she’s the one who repaired the bridge that allows local ranchers and farmers to cut hours off traveling time to town and back. January was taught woodworking and carpentry by her late father and years on the run (though to be honest, by the end of the book I’m not sure that the need was ever there) have honed her ability to defend herself with clever traps. No one is going to harm her again.

When she spots a loose horse with blood down the saddle, she knows her neighbor is hurt and doing the right thing, January lets herself into a world of hurt. Shay Billings is also a live and let live kind of man, until he sees his neighbors and friends being forced off their land with low ball bids then murder. But why? is an answer no one can give.

It takes a while to get to the bottom of what is driving the villain to his villainy. In the meantime, lots of evil villainy (CW – past death of a dog, threats to animals, then poultry death) is done quite openly, I thought. Things escalate rapidly from merely intimidating land owners out to outright murder. Then when attempts to eliminate the main characters begin to be done, no one has the sense to reach beyond local law enforcement? It’s not as if they’re isolated hundreds of miles from any potential help.

January and Shay do attempt to fend off the villainy without taking anyone’s life – partly because they’re still at the mercy of and potentially subject to arrest by a crooked sheriff and partly because they’re decent people who won’t shoot first and ask questions later. Still at the end, there’s a scene that (the one that had me yelling) where I found it hard to believe that January wouldn’t even draw her gun – yes, the one she had on her – to defend herself in the face of someone attempting to shoot her. I mean, if not now then when?

“The Woman Who Built a Bridge” is another book that is more gritty historical fiction than romance though there is a very, very slow burn romance. There are tiny hints of it towards the last third of the story but it takes until the last page to get there. It’s also far more gritty and at times the threats of violence had me wondering if you’d break the rules of fiction and kill the MC’s dogs. Yay, that you didn’t. I liked the strong heroine and the “peaceable until he’s pushed too hard” hero but they needed to draw against the villain sooner. They really did. C+