REVIEW: The Walls of Troy by L.A.Witt 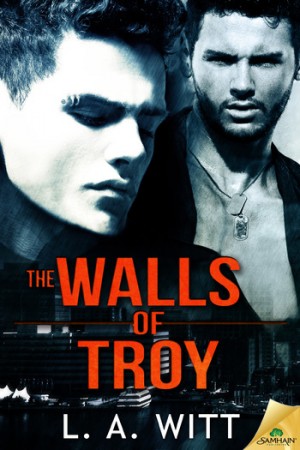 Just when the pieces begin to add up, danger blows them all apart…
MA1 Iskander Ayhan’s orders are simple: stay with Admiral Dalton’s son as a plainclothes bodyguard while the kid attends university classes. So typical—a high-ranking officer abusing Navy resources for unnecessary security.

It isn’t long before Iskander realizes there’s more to his assignment than protecting the kid from benign harassment by homophobic classmates. Behind those piercings, eyeliner, and bad attitude, Troy Dalton is scared. Truly, deeply, scared.

Troy is indeed hiding something. Iskander is the only one who’s ever taken his fears seriously, which gives him hope. Yet Troy isn’t sure one lone, armed-to-the-teeth bodyguard is enough to keep him safe, especially since he can’t risk telling Iskander the truth.

As Iskander slowly gains Troy’s trust, the walls start coming down. And before they know it, the warmth between them explodes into real heat. Until suddenly Iskander realizes he’s a magnet for danger, not a shield.

Now he doesn’t know how to keep Troy safe—stay close, or get as far away from him as possible.
Warning: Contains a younger man with a thing for older men, and an older man who doesn’t usually have quite so much trouble resisting younger men. Author is not responsible for any bad academic habits that might result from watching these two “study” for their exams.

Your books are hit or miss for me, but I usually like your “military” works, so when I saw this story I could not resist purchasing it. The blurb described the set up pretty well – after fifteen years in the military police, Iskander had decided to go into the protective detail field, hoping he could “play plainclothes bodyguard to some admiral. An admiral who, once I earned his favor, could put in a good word for me if I ever applied for Officer Candidate School”.

Instead he gets orders to play the bodyguard to Troy, the twenty year old son of the admiral. I admit that I was intrigued by the blurb, I was curious to find out what game Troy was playing, if he was indeed playing any games. Unfortunately, the first meeting between Iskander and Troy treated me to Iskander at least being instantly attracted to him.

“The least they could have done, though was given me a heads-up that Admiral Dalton’s son was fucking hot”

And here I was groaning, thinking – not again, please spare me another Instant Love Story. Luckily a lot of attention was devoted to whether Troy indeed had reasons to be afraid and what exactly he was afraid of. I liked how that story developed, in fact I really liked Troy – he was a lovely mixture of vulnerability and strength. I liked how he wanted to meet the world head on even with the threat looming over him, but at the same time he did not act stupid in that sense. He knew he needed help and he asked for it, even if he was not the most straightforward in how he did it. But I bought his reasons and I understood why he would act that way. I do not think it is a spoiler to say that the threat was real since the blurb is pretty clear on that, even if it was not what it was supposed to be in the beginning of the story.

I liked Iskander too. I liked his pragmatism in accepting his assignment and knowing what he wanted out of it, and I liked how excited he was to go back to college. I liked that he believed Troy and figured out that he really was in danger.

“He couldn’t hide the PTSD. Not from someone like me who’d seen it in too many people and knew the signs this well.

But he also hated when the PTSD surfaced, forcing him to tip his hand and reveal that he wasn’t as invincible as he wanted the world to believe. Troy was scared and vulnerable, and he wasn’t someone who dealt well with being scared and vulnerable. He didn’t want to be protected. He wanted to be safe. Not guarded, not hidden behind walls – physical ones or those of his own creation. He wanted to stand on his own two feet, face the world head-on and not have to bring along outside protection.
The fact that someone like that had looked me in the eye and all but begged me to stay with him even if I thought he was crazy? That scared the shit out of me.
What’s happened to you, Troy?
And how do I protect you? “

Of course I did not like him being stupid and eventually caving in and sleeping with his charge. I absolutely did not mind their age difference at the end of the story, but come on – a 33 year old bodyguard at least in theory should be able to know what is best for him in order to do his job well, and not sleeping with his charge is way up there. Oh well, I am starting to think that this another plot twist that keeps happening more and more in romances – people who should not be sleeping with each other because of their differing positions at work, school, army, really want to do that. Is this basically a “forbidden fruit is the sweetest one” kind of thing? Is this just an attempt to show that this happens a lot in the military? There is a moment in the book where a colleague is giving Iskander a piece of his mind and I was glad that the issue was not just ignored.

“Okay, first of all you are a fucking idiot for putting your dick in someone you are supposed to protect. But you knew that. You’ve heard enough stories about bodyguards fucking officers’ wives and getting their own asses handed to them”

Whatever it is, I am trying really hard to accept the premise and keep from wanting to smack a character who should know better.

At least Iskander knows that he is being unprofessional and at least he does what he needs to do in order to keep Troy safe after they succumb to their passion.

I even liked them together when I was not thinking about them as bodyguard and charge and at the end I was happy for them.

I also really liked that Troy’s father, Admiral Dalton genuinely cared about and loved his son and Troy clearly felt the same. It was great to see a supportive (if somewhat flawed) parent for a change. I still feel that I do not see them enough in m/m romances.