REVIEW: The Stillness of You by Julie Bale

This new adult book told in alternating first person from Georgia and Ben Lancaster’s points of view. Georgia King is a 20-year-old who is three months off of a suicide attempt trying to cope outside of her mental hospital. She is living with her brother and struggling with her medications. Her brother, Matt, is a coach of the Philadelphia Flyers and when they sign a brand-new player he comes to stay at her brother’s loft until he can find a residence in his new home. 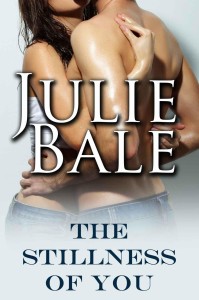 Ben and Georgia immediately strike sparks off of each other, but one of George’s manifestations of her mental illness was promiscuity. Georgia goes to some pains to explain to the reader that she doesn’t judge other women’s sexual choices but that her sexual choices have all been bad in the past. Because Georgia’s mental illness manifested itself in unhealthy relationships with the opposite sex, her interaction with Ben throughout the story seem tainted because their relationship was largely physical.

I think that this could have been ameliorated a bit if Georgia and Ben’s thoughts and actions weren’t so focused on how much they desired the other. However, it is this forbidden aspect of the story that gives the book emotional power.

Ben is a superstar in the making and he comes off as a little too good to be true. One aspect of Ben’s narrative is how much loves everything about Georgia particularly her body from her small but real boobs to her pale skin instead of the fake tan he had experienced in the past. And of course her willingness to eat. I always wonder about the super rich hot famous guys who constantly date women who are not to their taste. Surely a guy like that, who has a buffet of women to choose from, would be able to date women with real breasts and milky white skin if that was his preference.

During the short time but Ben and Georgia spend together, Ben develops serious feelings for Georgia. These feelings are so serious that he eschews all other women and despite the lack of certainty from Georgia, he remains willing to wait for her.

I felt tense throughout the story.  Georgia’s actions all seemed designed to put her back into the expensive treatment center she came out of.  She wasn’t obeying her medical orders, refusing to take klonopin along with her other anxiety medication. She lied to her brother about taking her meds, flushing one pill down the toilet.  She lusts after Ben, hard, and while she recognizes that sex was a problem for her in the past, she plunges into a physical relationship because Ben is exactly the type of guy she adores.

I also struggled with Georgia’s relationship with her brother.  They were each other’s only family.  Georgia treated Matt pretty poorly, striking out whenever he cautioned her to slow down; when he showed concerned; when he gave her warnings.  But in the end, I couldn’t help but wonder if all of these things that bothered me about Georgia were exactly the signs and symptoms of her mental illness and to that end, well done, right?

Did I mention the steamy scenes?  Georgia and Ben communicate best with their bodies and to some extent, because Georgia’s mental illness involved acting out with sex, it seemed appropriate.  In some ways, it reminded me a little bit of the Crossfire series except Ben isn’t as screwed up as Gideon.

The story ends not on a cliffhanger but a happy for now which is the appropriate place because Georgia is clearly not in the right frame of mind to continue a healthy relationship with Ben. However, I admit I am nervous about the future of the couple because there are hints that the future may contain jealousies and temptations that both characters might have to deal with.  C+