REVIEW: The Soldier of Raetia by Heather Domin 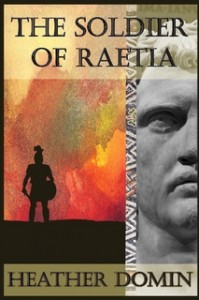 Thanks again for contacting us about reviewing “The Soldier of Raetia.” I’m a pushover for just about anything regarding ancient Rome and having reviewed lots of m/f books about the era, I was primed to try some m/m toga action. At least I thought I remembered it was going to be m/m for the lengthy time it took before this was finally proven to be.

Lucius Manilus Dardanus is a boy searching for purpose. Marcus Cassius Valerian is a man with nothing but duty. On the Roman frontier, the general of a legion and the soldier sent to learn from him will each face their enemies as they come to realize the intensity of their connection just as battle and betrayal threaten to extinguish it -‘ and possibly their lives.

The Soldier of Raetia is a story of fate and desire at the edge of an empire -‘ a story of blood and brotherhood, of honor, sacrifice, and love.

You weren’t kidding when you said this is a Bildungsroman crossed with a war novel. There’s lots and lots of bildungsromaning to get through as the book begins. And though I like historical stuff and tidbits about ages gone by – and think you did a fantastic job integrating these aspects into the weave of the story – I began to fidget after a while. Okay, so this is how soldiers trained to become legionaries and this is life in a Roman villa and how one would honor the household gods, etc – yeah, got it let’s move on.

I enjoyed the comradeship aspect of the story. I’ve heard over and over that even though soldiers are supposed to be fighting for a country or ideal, what it generally boils down to is that they fight for their buddies, as we see here. They also go whoring with them, gamble with them and just hang out with them on those days when no one with more shiny stuff on his uniform orders them to do busy work.

Once the book moved on to Raetia, the pace began to pick up and I perked up. One thing I love is when a book gets me to check out its backdrop. It means an author has caught my attention to the point where I want to know more yet avoided the dreaded info dump. There are few things I dislike more than when a story screeches to a halt as an author shows how much research was done and tries to include stuff which truly has no place in the narrative. I approve of your choice to invent a Legion and an enemy for them yet to stick to realistic goals and possible events. No complaints from me on this score.

Were I do have a complaint is about Dardanus. Sorry but I just never could understand why everyone loves him so much beyond him being a Marty Stu. He’s too young to have lived much, he’s too self effacing, too darned grateful for the chance of Valerian’s sponsorship, too angsty about the darker aspects of being a soldier. He’s like a puppy, desperate to please, who’s so cute that people can’t help but go “awww.” Valerian tells him that no one will question the fact that Dardanus is being promoted or ever whisper it’s because he and Valerian are shacking up. Maybe not too loudly but I’ll bet some mention of it is made.

Valerian, on the other hand, has some character, some age on him and things that are interesting about him. He comes off the page as a man used to command, used to the intricate dance of politics on the Roman frontier, used to the pomp and ceremony of a Roman Legion and how to use that to his, and Rome’s, best advantage. I liked watching him and learning about him.

One thing that I did like is that in this day and age, homosexual relationships could be open and were accepted as normal. No shame, no stigma, no hiding in dark corners, no aspersions cast on anyone’s manhood, no questions about why a homosexual would want to be in the army. This was a major relief as I don’t have to worry about how Gay friendly a world is that the characters inhabit and can concentrate on the relationship as it is.

So there are many things I thing are pluses about the book but the slow opening and bland major character are issues that bogged it down for me. I never “got” Dardanus and, for me, the book ended with him as still more of a “wet behind the ears” person than anyone who’d advanced and changed due to the events portrayed in the story. C+

This book can be purchased at Amazon, Lulu or in ebook format from Lulu.

This book was provided to the reviewer by either the author or publisher. The reviewer did not pay for this book but received it free. The Amazon Affiliate link earns us a 6-7% affiliate fee if you purchase a book through the link (or anything for that matter). We do not earn an affiliate fee from Lulu.