REVIEW: The Rites and Wrongs of Janice Wills by Joanna Pearson

Word on the street is that the next big thing in YA is the contemporary. I’m not sure I’m convinced. Vampires seem to be the dying trend that never goes away. With the impending Hunger Game movie(s), I don’t see dystopians leaving anytime soon. In fact, I foresee an explosion once the first movie actually comes out! But despite my preference to stick with what I know (all things SFF), I decided to give this emerging trend a try and your book fit the ticket.. 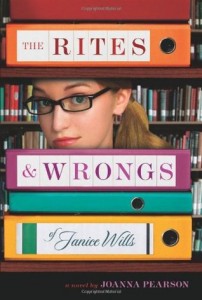 Janice Wills is your regular girl living in a small North Carolina town. And by regular, I mean the regular heroine you’d expect in this type of novel. She’s not the pretty girl. Nor is she the popular girl or the artsy girl or even the athletic girl. In fact, she likes to stand apart from all the cliques. You see, thanks to an offhand comment made by her mother many years ago, Janice discovered a burning love for anthropology. It’s her passion and she views her high school days through a anthropological lens.

But like many small towns, hers holds an annual festival. And at this festival, there is a pageant in which all girls of a certain age are expected to enter. Janice happens to be the proper age, but she has no desire to enter even though her mother wants her to do just that. However, Janice’s plans change when her crush, a Hot Theatre Guy (an anthropological term) takes notice of her. This inspires Janice to enter the pageant, in order to both get an insider’s look and the material she needs to write that killer anthropology paper.

At its heart, this is a simple story of an outsider who stops standing on the sidelines and decides to jump into the game. The anthropological quips and factoids were merely fancy dressing. Enjoyable and charming dressing, to be sure, but still dressing. That said, I did like Janice’s transformation from being someone who stays on the outside looking in because she’s afraid of being rejected to someone who gets involved and tries something new.

I wish her friendship with Margo, and the conflicts that arise over the course of the novel, could have been given more attention. The treatment seemed somewhat shallow and cliche: Margo was tired of being an outcast so she decides to get a makeover and join up with the popular girls, leaving Janice in the dust? Why? How did she go from someone who’d spit at the feet of the resident queen bee to someone who’d ditch her best friend and go to dinner with them? It didn’t quite make sense with what was included in the narrative.

There are other places that struck me as somewhat thin. The mean girls are, of course, Mean Girls and while I could see the attempt to give them more depth, they never quite rise out of their stereotype. Effective for having an example of What Not to Be and Do, but not so much in terms of subtlety and nuance. I also found the romantic subplot obvious and unsurprising, although I did like the fact that it started out with a misunderstanding regarding the relationship status of the guy in the question.

Bonus points for acknowledging the race issues that could exist in a small Southern town like Melva through the existence of the pageant and the make-up of its contestants. True, it wasn’t an in-depth exploration. But just the fact that it was both acknowledged and mentioned by the characters showed a certain amount of awareness that I appreciated.

I think your voice is the novel’s best trait. It’s true that the anthropology angle could be viewed as a gimmick, but the voice was strong enough to carry it. It gave a refreshing spin on a familiar story and results in a not unpleasant way to spend a couple hours. C+