Readers please note: I found it difficult to discuss what did and didn’t work for me in this book without revealing SPOILERS. While the biggest spoiler is hidden, there are other spoilers visible in the review. — Janine 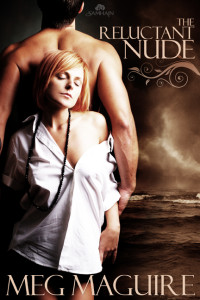 The Reluctant Nude opens with Fallon Frost arriving at a studio in Nova Scotia. The studio belongs to M.L. Emery, a famous and reclusive classical sculptor, and Fallon is the model for a commissioned sculpture. Fallon has been coerced into modeling in the nude for Emery by Donald Forrester, the millionaire who commissioned the sculpture, and her reluctance to pose doesn’t help her feel better about the man who will be sculpting her naked body. Fallon quickly discovers that Max Emery is French-born, younger and better looking than she supposed, and that he rubs her the wrong way.

Max is perceptive enough to realize something’s not quite right about Fallon’s presence in his studio when it’s clear she’d rather not be there, but since he’s not aware of the details of her arrangement with Forrester (these aren’t revealed to readers for quite some time, either), he doesn’t know the extent of it. Still, he’s concerned enough that despite the fact that he stands to make $700,000 on the commission from Forrester, Max decides to unsettle and discomfit Fallon to encourage her to leave.

Eventually Max realizes that whatever her motives, Fallon will stick it out in his studio, and at that point he starts to befriend her (Incidentally I wish I’d been shown how he arrived at this epiphany instead of the story skipping forward in time and thus glossing over it). It’s far from the end of Fallon’s trials, though, because Max’s creative process involves getting to know her on a deeper level than Fallon wants to be known by a man who will be sculpting her for someone she despises. But Fallon is drawn to Max and Max to Fallon, and of course, the complications resulting from the way their relationship begins don’t make the course of their romance a smooth road.

You make some daring choices with the hero in this book and I applaud them. It’s not every day you see a French-born sculptor given a central role in a romance (Nardi in Judy Cuevas’ Bliss is the only other one I can think of). It was really interesting to read about Max’s work and the way it had affected his life. And I loved the little nods to his nationality such as his love of red wine, his European sneakers and his soccer shirt.

However… Max was said to speak with a pronounced French accent despite the fact that he left France for England at age thirteeen. Thankfully, you convey his French accent with syntax only, but since I am a non-native speaker of English who didn’t learn to speak it fluently until almost age twelve myself, I still thought Max’s English was far too French-sounding given his background. An explanation for this was given eventually, but I found it only partially convincing, and wished it had been provided sooner because I spent a good chunk of the book irritated by the French syntax in his speech.

The early parts of the book didn’t draw me in that much because initially, Fallon was understandably reluctant to pose for Max, and the nature of Max’s work was such that it seemed to require him to violate her boundaries over and over by asking personal questions and insisting that she allow him to touch her, on top of the fact that she had to remove her clothes.

I don’t know enough about sculpting to have any concept of whether or not these are common practices among members of this profession, but like Fallon, I resented Max’s constant intrusiveness in the beginning. At the same time, I thought Fallon was unfair to Max in making snap judgments about everything from his motives for sculpting scarred people to his sex life. Fallon’s prickliness got on my nerves at first almost as much as Max’s disregard for her need to maintain her personal space.

The middle of the book was much better because this was where trust and understanding developed between them and it was clear that Max was falling hard for Fallon even before Fallon herself recognized it. Max, who began the book by annoying me with his paternalistic attempt to drive Fallon away for her own good revealed himself to be such an endearing, good hearted, lonely soul that all the reservations I’d had about him went out the window.

Max’s past was a painful one, and when he opened up to Fallon despite all his vulnerability, I could see how much he wanted not just sex, but closeness, from her. Also, his lovemaking. Fallon had some issues with sex and being touched and even though I’m not usually a fan of books in which the heroine at almost thirty has never been satisfied in bed before and yet she gets over this problem in one night, it worked for me better in this book than it typically does because Max was such a generous lover as well as because Fallon’s feelings – a mixture of desire and insecurity — were so well portrayed. This section of the book was mesmerizing partly because being able to respond to Max physically was such a personal triumph for Fallon.

Given Fallon’s issues, as well as Max’s good looks and fame, I totally got why Fallon felt out of her league with him in so many ways, and was afraid to give him her heart. Max and Fallon have some things in common in their pasts, but Fallon doesn’t share the events of her childhood with Max until very late in the book. Once I learned about the commonalities between them, I understood even more clearly why Fallon had been so drawn to Max, and why she felt that he was the one man who could break through her shell.

However, it was harder for me to fathom why Max would be so completely enchanted with the closed and rather prickly Fallon. In the absence of knowing about and understanding the events that shaped her, what was it about Fallon that made her the first and only woman Max had ever fallen for? He was such a loving person that it was hard to envision him not making a connection sooner, with someone less difficult to connect with than Fallon.

I found the ending frustrating because while Max makes a wonderfully romantic grand gesture, we weren’t shown how Max and Fallon negotiated their differences with regard to the futures they wanted for themselves.

[spoiler]Max really wanted a child, and Fallon wasn’t sure she wanted children. Instead of showing how this was worked out, the book simply skipped some years into the future to an epilogue in which they had a child. I felt this gave short shrift to how huge a choice starting a family can be. It isn’t for everyone, and Fallon’s resistance felt so real to me that I needed more than a grand gesture to explain her turnaround.
[/spoiler]

You made the characters in this book feel so real, their attraction palpable and the challenges their relationship faced felt substantial. I loved that about it, and I especially grew to adore Max. I also loved the specificity of details in your writing. Things like the quiet Nova Scotia setting, Max’s studio with its diversity of windows, Fallon’s co-ownership of a house with her best friend, served to make the story distinct. When Max and Fallon went on a date, I didn’t feel that I was reading what could be any couple’s date. When they made love, I felt that I was reading about something truly intimate between these two distinct, specific people.

Which is why, despite the stumbling blocks that kept me from loving this book, I’m not sorry I read it.
C/C+.

→ Janine
Previous article: REVIEW: The Rites and Wrongs of Janice Wills by Joanna Pearson
Next Post: Thursday Midday Links: Kindle Too Restrictive for Library Use