REVIEW: The Promise by Kristen Ashley 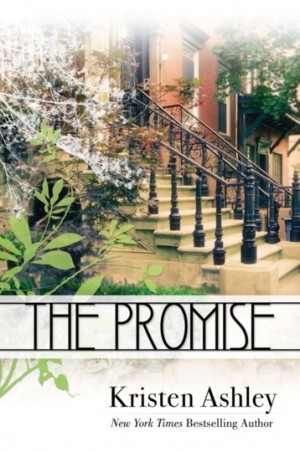 Your ‘Burg series is among my favorites, with At Peace (Joe and Vi’s story) being a routine re-read for me. During the course of At Peace, we meet the Bianchi’s, Joe’s very Italian cousins who own a successful pizzeria in Chicago, among them is Benito Bianchi, son, and Italian Hot Guy. We also meet Francesca Concetti, who ends up being involved in At Peace’s climax and is forever tied to Violet. It’s clear from At Peace that Benny and Frankie have a history and a lot of chemistry, so I was really looking forward to their love story.

The Promise picks up days after the end of At Peace. Frankie is in the hospital healing from her gunshot wound. She’s been in for about a week and has been avoiding the Bianchi’s, who have all visited multiple times wanting to thank her and make amends for a seven year long rift they’ve had. She’s been avoiding them by faking sleep. The most persistent of the Bianchi’s is Benny. She and Benny have history. Frankie was with Vinnie Jr., Benny’s brother for years. But Vinnie was killed after getting himself involved with his uncle, who is a mob boss. The Bianchi’s have held hard feelings towards Frankie for years, thinking that she should have somehow been able to lead Vinnie down a better path. Needless to say, Frankie putting her life on the line for Joe’s woman has erased all hard feelings and the family is now anxious to mend the rift.

Frankie has absolutely no interest in mending fences. Before the rift, the Bianchi’s were Frankie’s shelter from her incredibly messed up family. They encapsulated everything that she wanted in her life. And when they shut her out, it devastated her. In particular, Benny’s neglect. She and Benny had always been close, and after Vinnie died, Frankie made a drunken pass at him. He reacted badly and shut her out completely after that. She’s hurt and angry and unwilling to swing her emotions out on the line for any of the Bianchi’s again. Unfortunately, Benny has other plans. Frankie nearly dying has pulled his head out of the sand and he’s going to finally take action to rectify the rift and to establish the two of them as a couple. He picks up Frankie from the hospital and takes her to his house, where he commences with the wooing.

Frankie spends alot of time being outraged at Benny’s high-handedness and irritated at the way he insists on caring for every little detail of her life. He’s overbearing, confrontational and determined to get his way. He’s also at times very sweet and solicitous, and between that, and the other members of his family being so anxious to mend the rift, soon he and Frankie are a couple and quickly falling in love.

All of this happens in the first third of the book, which was fun, compelling reading. Problem is, after a few fits and starts, Frankie and Benny are together. And there’s still two-thirds of the book to go. The rest of the book involves an industrial espionage plot that involves the heroine making a number of very risky decisions that I think are moronic. And some family drama with Frankie’s side.  But it also involves the birth of Vi and Joe’s baby as well as their wedding, both of which I loved reading about.

I found the book to be what I’d term a trademark Kristen Ashley self-pub. It’s over-long, features an overbearing alpha hero and a heroine whose character is mostly derived from throwing alot of attitude around and generally being a pain in the ass. There are also the expected details descriptions of hair/makeup and clothing and the heroine does alot of whispering. So, basically, all of the things that make up your authorial voice. This was a book that I read relatively compulsively although not with the absorption of some others. But, if your fans are looking for a Kristen Ashley fix, this will do, and certainly it gives great glimpses of past, beloved characters. In the end it’s not my favorite, or even in my Top 5 favorite Kristen Ashley books, but I think those who read you regularly will enjoy it. Final grade: C+