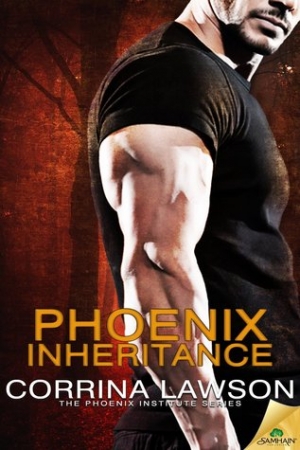 Phoenix Inheritance is a action-packed (Navy SEALs,) family issues oriented (autism,) paranormal (psychic powers) romance, and it does all of those things pretty well. Renee Black and Daz Montoya are no longer together, but Daz is part of their son’s life, although his security work keeps him away much of the time. But after going up against a bad guy with superpowers, and barely making it out alive, Daz realizes how much he lost when he and Renee broke up. When he learns that a major storm threatens her mountain home, he heads out to help comfort their son Charlie and keep them safe… and hopefully work his way back into her life.

He arrives just in time to save both of them, after Charlie runs after a cat he claims talked to him, and goes over a cliff. As a member of the Phoenix Institute, Daz knows that communicating with animals might actually be possible… and he wonders if telepathic powers could be what’s behind his son’s autism diagnosis.

No. No, thank God, it isn’t; I would’ve been extremely sorry I was reading the book on an ereader and couldn’t tear the pages out and burn them. Charlie is autistic and stays autistic: as Renee realizes, his autism is “as ingrained as his animal telepathy.” Part of Daz’s challenge will not just be convincing Renee that he truly loves her and won’t let her down, but accepting his son as he is. And I was really happy to see a portrayal that goes beyond the usual stereotypes: like many of the autistic kids I know, he’s a bright, affectionate boy who has trouble fitting into the outside world because of sensory issues, need for routine, and impulsivity. I’d be annoyed about him having a supernatural power, except that this is an entire series about people with supernatural powers. (This is actually the fourth book in the series, but I had no trouble following it.)

I enjoyed the portrayals of Daz and Renee as well, two strong, capable, and notably mature people. Renee is a search and rescue worker, and has a fair share in the adventures. The romance doesn’t get a lot of page time, amidst all the action, but there’s good chemistry between the characters and it didn’t feel lacking. I did have trouble getting into the frequent flashbacks to the start of their relationship, perhaps because they were interrupting the story I was already interested it.

Other than being kind of bored during the flashbacks, I don’t have any major complaints, although there was one point where I wanted to shake the main characters. (Even after realizing that Charlie really might be able to talk to animals, neither one pays any attention to the troubling things he’s reported the animals as saying.) My grade isn’t higher mainly because even with the well done elements, and some cleverly imagined paranormal aspects, the prose is just not that vibrant or distinctive; it was entertaining, but didn’t really move me, and I feel no urgent need to read the rest of the series. At Dear Author, a book you’d probably never read again is a C. But I’ll go higher, because I got a little heart-twist from Daz realizing that even though he doesn’t have superpowers like the men he works with, he can still be enough to defeat a villain:

It’s a nice metaphor for all the parents who are doing the best they can. C+