Oh the cute YA spy story.   How I love it.   There are days when the only thing I am remotely interested in picking up is a lighter read that makes me happy.   These are the kind of reads where cliches aren’t really a problem and I don’t put as much thought into the overall story arc because I don’t need to.   I usually find myself thinking about them anyway, but I don’t have as many expectations involving the read. 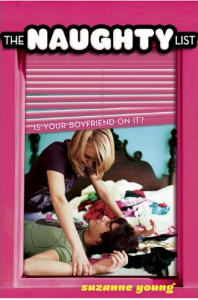 I picked up The Naughty List for this purpose.   I’d read some pretty positive reviews on this series starter – realized it was self contained – and felt like it would be a good addition to my reading pile when I didn’t have a lot of time to read.   I came out of the read pleasantly surprised, but did have some quibbles with the main character and the relationship that occasionally pushed my buttons.

The Smitten Kittens are some of the peppiest and friendliest cheerleaders around.   Their team, the Washington High Wildcats, can’t play a game well without them.   Tessa Crimson is the excited and prim captain of the squad, and also leads them in their activities outside of the gymnasium.   To the girls of Washington High, the Smitten Kittens aren’t just a cheerleading squad, but a spy agency dedicated to discovering boys who cheat on their girlfriends.

What’s good (yet not so very good) about the Smitten Kittens is that they are always busy and always prone to success.   They get a lot of business, and have a 100% rate of success for finding the suspected male cheating on his girlfriend.   Tessa seems to be the only girl at Washington High that has a boyfriend that doesn’t cheat on her.   Aiden Wilder is a basketball star and pretty much the best boyfriend she could ask for.   Being with him permanently seems so easy!

Tessa soon comes to realize that things aren’t as perfect as she thought.   The more she does work for the Smitten Kittens, the more she comes to think that maybe she and Aiden don’t work well together.   He’s becoming more aloof as of late, and she wonders if all he really cares about anymore is the sex.   For the first time in the past two years, Tessa considers the frail nature of the   high school relationships she sees everyday and realizes that hers could be exactly the same.

These events rise to a pitch when a brother and sister pair move into town.   The boy seems interested in Tessa even though she’s dating Aiden, and the girl is a snarky bitch that doesn’t know how to be polite.   Aiden also gets accused of potential cheating.   The more Tessa gets into things, the more she realizes that she is a lot like the other clients of the Smitten Kittens – and she doesn’t like it.

Tessa is a heroine that you will either love or hate.   As of this moment, I’m still not sure as to what I feel about her.   She’s optimistic and skilled and has good drive.   Those are things I can appreciate in a main character, especially in a book like this.   Yet there were many moments throughout the text where I couldn’t get a grasp on why she was acting certain ways.   She has a very minimal idea of relationships for someone who deals in helping other teenage girls with them.

This was probably her biggest issue in the entire book.   I could understand that a teenage girl would want to think the best of her boyfriend, especially when said boyfriend is polite to her parents and respects her and seems to love her.   Working in what she does and knowing her responsible side, she appeared to be out of character when commenting on how she thought that she would spend the rest of her life with Aiden.   I’m all for HEAs, but in the teenage years I don’t think many people have that mindset.   We hope for the best, yes, but the combination of what she sees everyday (cheating boyfriends) and the fact that she’s in high school just doesn’t ring true as understandable behavior to me.

With all of this considered, though, she has some interesting parts about her.   Tessa refuses to swear.   She’ll get down and dirty with Aiden (and I’m talking the whole shebang here, not just some kissing) but she doesn’t like to swear.   There is also lingering parental issues from when her parents separated.   They got back together and seem to be happier than ever, but to Tessa it represented the loss of control and stability of relationships.   Aiden’s mother was also determined to get Aiden to see other girls because she married and divorced her high school sweetheart.   In a way Tessa is blindly determined to have the relationship work.   So there is indeed set-up for her actions.   I just don’t think it really had enough impact for me to be okay with her entire frame of mind being blind to the trappings of high school relationships.

Aiden was a hero that will charm if not impress.   He’s meant to be the cool jock that is kind and considerate.   Nothing really for or against him – although at the end he annoyed me a bit when he didn’t even consider that he could be pulling away from Tessa.   The very very end gave me some hope for their relationship being a little more real, yet still seemed a little too positive considering it was basically what they were doing before but slightly altered.

Tessa’s run in with the new boy is kind of wonky as well.   He could have been a gray character, but instead he falls into more of an antagonist role.   He does make her realize she can be attracted to other guys, but it would have had more of an impact if he had better intentions and tried attracting her in a less forceful way.

Your prose is probably the most fun and advanced part of the book.   It’s cute and it flows well and doesn’t leave slow parts.   The Smitten Kittens forms and announcements between chapters are a great tool to show readers what they do behind the general plotline, and actually provide fodder for conversations between Kitten characters.   It’s certainly strong enough for me to try and pick up the next book and other books by you, but I would hope that the character consistency would be improved on.

Another strong aspect – perhaps the strongest – is the entire setup of the Smitten Kittens.   I have seen it compared to a modern, spy version of the Babysitter’s Club (in business sense), and I have to agree.   This book shows a great example of how teenagers can in fact be leaders and entrepreneurs.   Tessa runs a smooth operation and her cheerleaders manage to keep a lot of steady business going while she deals with her own doubts and issues.   The spy scenes are also extremely amusing to read, and it’s a light and joyful balance between joking passages (like how they should use their supplies to buy a grappling hook instead of lip gloss) and serious ones that capture the excitement and dread of discovering another guy cheating on his girl.

This book was a good use of two or three hours of my time or my time in between classes at school.   There were some really cute ideas, and the spy scenes and concepts of the Smitten Kittens were well written and intelligent.   The main character was hot and cold for me and I could have dealt with more development and thought into the relationship in the book, but it was an enjoyable read.   For all its faults I liked it and will pick up the next book soon enough.   C+