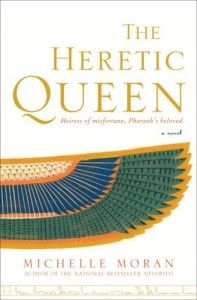 While I was reading your new novel, The Heretic Queen, I kept thinking about Shelley’s poem about Ramesses II, “Ozymandias,” especially these lines: `My name is Ozymandias, King of Kings: Look on my works, ye mighty, and despair!’ The theme of Shelley’s poem is the impermanence of human power, which is echoed in your novel in the sense that the legacy of these historical figures is both greater and lesser than their actual human-ness.   In The Heretic Queen, for example, there is a somewhat idealized portrayal of Ramesses and his Chief Wife Nefertari, who seem both more and less than is suggested by the mammoth images that still exist to memorialize their contributions to ancient Egypt.   As a novel, The Heretic Queen offers a historically altered but readable story, the strengths of which are also some of its weaknesses.

The historical Pharaoh Ramesses II ruled Egypt for almost 70 years, overseeing one of Egypt’s most prodigious periods of growth and stability during the 19th dynasty.   Red-haired and relatively tall, Ramesses also bore many, many children (estimates top 100) with his many, many consorts (which likely include several of his own daughters) and actively contributed to his larger than life persona in many, many ways.   The Ramesses of The Heretic Queen begins his story at 17, when he becomes co-Regent (co-Pharaoh, basically) with his father, Seti I, and takes his first wife, Iset, a young woman of great beauty and strong ambitions to be chief wife.   Ramesses, however, is also close to Nefertari, princess and niece to Nefertiti, who, at 13, is still somewhat awkward and unsure, despite her obvious adoration of Ramesses, and a political risk as queen because of her heretic heritage.

After a year training at the temple of Hathor, however, under the tutelage of its High Priestess (Woserit) and one of Ramesses’s Viziers (Paser), Nefertari has grown into her beauty and her training in multiple languages and court politics, returning to the palace to catch more than just Ramesses’s eye.   Demonstrating a rashness that characterized the real pharaoh, Ramesses takes Nefertari to wife, clearly intending to make her Chief Wife above the jealous Iset, who has her own advocates in Woserit’s sister Henuttawy (High Priestess of Isis and sister to Seti) and the Vizier Rahotep.   Henuttawy and Rahotep are as ambitious to have Iset made Chief Wife as Woserit and Paser are to have Nefertari in that elevated role; however, they have more ruthlessness and, it appears, the ear of Thebes, which expresses enthusiastic displeasure at the idea of a “heretic queen” ruling Egypt and perhaps bringing more bad luck to the already draught-facing region.

The novel’s main conflicts are structured around the competition between Nefertari and Iset’s chances to become Chief Wife, with one wife characterized as the better match for Ramesses and the other as the better match for a superstitious people.   Where Nefertari is distinguished as a scholar and a diplomat, Iset is distinguished as a great beauty and an accomplished hostess.   Where Nefertari is feared by the people, Iset is embraced, except by Ramesses, whose affections for Nefertari are far deeper and more obvious than his professed love for Iset.   While revealed as more insecure and manipulated than villainous, Iset is clearly the lesser choice for Chief Wife, although Nefertari’s scandalous heritage makes her acceptance as the Pharaoh’s primary wife uncertain.   If Ramesses and Nefertari are to rule Egypt together as they wish, the people will have to embrace Nefertari as they do Iset, and much of the novel’s movement is propelled by the dual campaigns to secure and deter Nefertari’s elevation to Chief Wife.

On the surface, creating the link between Nefertari and Nefertiti seems like a powerful way to build conflict into the story and allow the relationship between Nefertari and Ramesses to grow in measurable ways, as Nefertari becomes more and more essential to her husband’s diplomatic and personal needs.   She speaks virtually every language necessary, accompanies her husband on military campaigns without a second thought (at one point having just given birth to twin sons), is judicious in dealing with citizen petitioners, and has an authentic and passionate love for Ramesses.   As Ramesses and Nefertari try again and again to persuade the people to accept Nefertari, their own bond grows, as does Nefertari’s maturity.   Although she is still younger than 20 by the end of the novel, she is mother to twin sons, compatriot in war and diplomacy, and a trustworthy translator, showing quite a contrast from the besotted but somewhat innocent girl who began the novel with no sense of her place in the palace.

However, in focusing so intensely on Nefertari’s emergent power – and securing her place in history as the object of an apparently devoted Ramesses, if the statues and poems to her memory are any indication – the character of Ramesses is inadvertently weakened.   For example, consider the plotting around Nefertari and Ramesses:

“There are a dozen pretty faces Ramesses might have picked,” Woserit continued.   “He named Iset because his father suggested her, and my brother recommended her due to Henuttawy’s insistence.   But why is my sister so insistent?” she pressed.   “What does she hope to gain?”

I sensed that Woserit knew exactly what Henuttawy wanted and I suddenly felt overwhelmed.

“You have never thought of this?” Woserit demanded.   “This court is going to bury you, Nefertari, and you will join your family in anonymity if you don’t understand these politics.”

This passage occurs relatively early in the novel, offering up the possibility that Ramesses might have some awareness of all the machinations going on to manage his personal and royal lives, but he seems largely clueless.   Later in the novel this becomes more significant, as Nefertari overhears something about Seti’s death that demonstrates an incredibly high level of proficiency in outwitting Ramesses, making it very difficult for me to see in him the makings of a Pharaoh with enough power and stamina to outlive 12 sons and who-knows-how-many risks to his life.   Some of his obliviousness can be attributed to his relative youth, his impetuousness, and his focus on the safety of Egypt’s vast holdings, but not enough to warrant his complete cluelessness.   Unfortunately, when combined with the portrayal of his historically notorious fall into an enemy ambush during the Battle of Kadesh, an instance where even Nefertari admits that “[h]is pride had cost thousands of men,” Ramesses famous rashness seems more like callowness.   Especially when it turns out that the very clever Nefertari ends up discovering the deceit and creating an opportunity to save Ramesses life (and as a side note, I was confused about the timeline during this part of the story, because the battle seemed to occur in the book several years before it occurred in Egyptian history).

Because so much of the novel’s energy goes into creating the obstacles to Nefertari’s elevation to Chief Wife, most of which relate to Rahotep and Henuttawy’s scheming (and all of which, from what I can tell, are straight fiction), Nefertari’s character sometimes strains the limits of credulity.   Within the space of a year she seems to transform from naÃ¯ve and unruly princess to sultry and focused Chief Wife-in-training, a shift that is undercut by the persistent youthfulness of her narrative voice.   For one of the things that struck me about both Nefertiti and The Heretic Queen is the YA voice of the storytelling, something that heightens the sense of trust the reader has in the narrative voice but also undermines the sophistication a character life Nefertari needs to outwit those who would undermine her.   And while her voice and demeanor do grow during the novel, the narrative tone of the novel does not ever shake the sense of youth with which Nefertari’s fictional presence is infused.

As I said earlier, the conflict created by the political machinations around Chief Wife create a very readable story, but one that begs a number of questions about who really had the power in Ramesses court.   In one sense it is always true that there is much more political complexity in a royal court than the official image portrays.   And it is always refreshing to read about the women who were just as capable and ambitious as their male counterparts.   However, when you have a figure who withstood as much as Ramesses, it is clear that he had some winning combination of smarts and ambition, and given the fact that Egyptian Pharaohs were seen as so close to the gods, I kept wondering how realistic it was that the people of Thebes would dare speak out – let alone actively protest, even riot – against Ramesses choice of Nefertari as wife or Chief Wife.   That they were so overtly displeased, almost storming the palace at one point, made me question – again – Ramesses’s effectiveness as supposedly the most powerful Egyptian at that moment in time, and it certainly made me question the fictionalization of Nefertari as Nefertiti’s niece.   And Ramesses’s persistent “don’t worry, we’ll convince them of your wonderfulness” attitude made him seem less devoted to Nefertari than singularly unprepared for the sophisticated demands of his position as Pharaoh.   Consequently, what the story engendered in tender devotion between the two it thwarted in offering the portrayal of a powerful couple.

Although I tend to appreciate as much historical accuracy as possible in historical fiction, I am not opposed to some tweaking, as long as the author has a good purpose and/or comes clean with the changes.   In this case, the changes are duly noted in an author’s note, and so I do not feel it would be fair to hold them against the book for their own sake.   But in terms of the purpose they serve in the novel, I did not feel the changes worked as they were intended.   Also, one note about the rivalry between Iset and Nefertari:   as much as I appreciated the fact that Iset was not portrayed as a one-dimensional villainess (unlike her power-hungry patroness), I am weary of novels that elevate one woman at the expense of another, finding the womano-a-womano hate to undermine the woman power often suggested in the winner of the contest.   I truly look forward to the day when the fictional portrayal one woman’s ascent to power is not conditioned on the degradation, suffering, disempowerment, or vanquishing of another woman, especially when the contest seems to straightforwardly good v. bad, regardless of how convenient or alluring the rivalry may seem.

As a sophomore effort, The Heretic Queen is more confident in its prose, better integrated in the details of Egyptian life, and a definite page-turner.   But the very things that create the novel’s central conflict also undermine the authority of its central couple, making those historical figures who saw themselves as larger than life not merely more human but less cogent than either history or fiction should ideally allow.   C+