REVIEW: The Gladiator’s Master by Fae Sutherland and Marguerite Labbe

Your book was pointed out to me by someone in my “trust network,” the description intrigued me, and I checked it out. I’m glad I did. The book was compelling, even if I had issues with it all the way through. 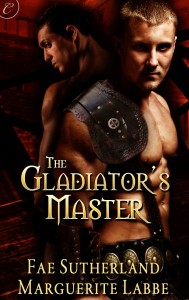 I kind of cringe when I read historical books set before the eighteenth century. It’s very difficult for me to believe that the authors can get it really right (not that I’m a historical expert by any means), because the way people think and relate to each other were so foreign. So I usually read squinting the whole way through. This book was set in the Roman Empire in two towns less than a day’s journey from Rome itself. And while we’ll never really know how Roman men (and Thracian men, for one of the heroes) examined and understood their own emotions or experienced falling in love with each other, I think the story did a relatively good job of keeping me aware of the fact that it was set in a foreign and historical environment, while still allowing me to relate to the characters enough to root for them.

Roman-set m/m books must be fun, to my mind, precisely because of the foreignness of the setting and the differing attitudes to m/m sexual interaction. Men were allowed to be together in Rome, even encouraged. (Whether they were allowed to fall in love with each other and eschew women as these men do is another question that I don’t know the answer to.) But the setting allows the external “closet”-type conflict in this book to be new, different, and interesting: the Roman nobleman is a sexual bottom and the gladiator slave is the sexual top, a switch in acceptable positions that could cost the slave his life if discovered.

Anyway…plot! Caelius has unexpectedly inherited his uncle’s estate, which he has come to inspect. The estate comes with a ludus: a stable of gladiators, all of whom are slaves. (I have not watched any of the Ancient Greece/Rome movies or TV shows, by the way, so I have no idea how influenced by them this book might have been.) Caelius immediately has the hots for Argon, the gladiator least devastated by the neglect of Caelius’ uncle. Little does he know that Argon is really Gaidres, a Thracian who has sworn to wipe out the line of the man who enslaved him and killed his lover (ie: Caelius’s uncle and male line, including Caelius, of course). Caelius, oblivious to Gaidres’ hatred for a while, brings him to his bed, shocking Gaedres by insisting that Gaidres top him — indeed, dominate him — in bed.

While the two men take tentative steps into a relationship, Caelius rebuilds the ludus and retrains the men for the games, even though he hates the games himself. His wife (!) gives birth to a son, then conveniently dies. They travel back to Caelius’ home estate, and then come back again for the games. There’s a strange plot about a murderously jealous gladiator out for Gaedres’ blood. It all seemed a little scattered and episodic. The uncle’s neglect of the ludus seemed strange: why would he do this to such valuable slaves? When did it start? Why have a ludus at all if you’re going to destroy it? How long had the neglect been going on? Had Gaidres actually ever fought in the ring? And yes, we’re given the answers eventually, but every now and then they seemed to contradict each other or be thrown in without rhyme or reason. The wife was an example of the casual misogyny of the m/m genre: greedy, stupid, and weak. If you’re going to kill her off anyway, why couldn’t she have been honorable and interesting? The jealous gladiator plot was weak but it seemed necessary to the overall narrative and so shoehorned in haphazardly.

Honestly, it was a struggle to get past the first page:

It had been a month since his uncle had died without warning. Privately, Caelius was of the opinion that Craxus had choked on his own bile. With his death came a whole new host of decisions. Caelius hadn’t wanted a new villa, especially one that needed so much work, but it did have a ludus and he took that as a sign from the gods.

Of course, the ludus was far from the glorious ones he had seen at other estates. What remained to be seen was how much work it would take to make it and the fighters ready for a grand show. He did not care for the games. Many powerful Romans did, however, and if he wanted to further his political career, what better way than to become a patron of their favorite pastime?

“Felix.” Caelius turned to his personal scribe and lowered his voice. “Spare no expense on the renovations. I want no problems later that we could have anticipated now.”

“I will see to it myself, Dominus. It doesn’t appear as if much has been done before our arrival,” Felix murmured for Caelius’s ears alone. “I examined the ludus as the men gathered in the courtyard.”

“I wish to see for myself before I make any decisions.”

A new host of decisions? Why new? A sign of the gods…about what? Dunno. Why should anything have been done before their arrival? And it would seem that he has already made a decision if he’s saying “spare no expense.” Why are they lowering their voices? Who is trying/able to overhear them? I was not impressed.

This type of inconsistency happened throughout the book. For example, Caelius tells Gaidres that “Men of standing do not have the strength and the physical stature I desire. Most go soft well before their time.” But earlier he had thought, “Normally his lovers were the complete opposite of Argon, pampered slaves skilled in giving and receiving pleasure. Lying down with Argon would be akin to bedding a lion and that only made the desire pool in his belly even more. He suddenly found such fire to be a delicious spice.” Okay, so nobles get fat and maybe slaves don’t, I get that. But there’s the implication that the slaves he’s used to are not of the same physical stature and power as Gaidres…except when they are. Hur?

There was a lot of this casual confusion and, more importantly, a lot of both characters feeling some emotion because it was necessary to the plot, rather than organic to his character. In fact, sometimes the emotions seemed to contradict his character altogether — like Gaidres unexpectedly spilling his guts (in INdirect dialogue — why?) to Caelius about his pre-slave life and love. It needed to happen then, so Gaidres finds himself doing it, even though he doesn’t know why. There was a lot of “he didn’t know why he felt this way” going on for both men (although Caelius was the more consistent character), which created an emotional separation for me from the men. I was hyper-aware of reading about characters who were at the mercy of their writer(s), rather than reading about people acting in ways that were true to their personalities.

However, I persevered. And in the end, I’m glad I did. Somehow, this book was a very compelling read. I know this review has been nothing but picky picky picky, but I really did enjoy the story despite having to ignore the pickypickypicky as I read. The conflict between the characters was not quickly solvable, the interaction between them was hot as anything, and the sex was really really hot:

Caelius’s hands curled on the wall, his cheek pressed against the cool stone as Gaidres’s tongue drove into him. He moaned his lover’s name, crying out again as Gaidres’s tongue left him, leaving him aching and empty. A rough nip on the cheek of his ass sent a shudder through him. “Gaidres…Gaidres, please.”

“What do you beg for, Caelius?”

Caelius trembled at the sound of his name on Gaidres’s lips in that low growl. He sagged against the wall, looking over his shoulder at his lover. “For you. For whatever you would have me say.”

He sank down onto his knees, twisting to face Gaidres. The raw desire on his face made Caelius’s heart pound faster. “Please, Gaidres.” He wet his lips. “I beg you, let me touch you. Let me feel you inside of me. Would you have me crawl? I’d do it. Would you have me scream your name? Whatever you desire.”

Gaidres groaned, leaning in, lips so close but never touching Caelius’s. “I would have you crawl, Caelius.” His voice was a rough whisper that sent shivers dragging down Caelius’s spine. “But I will make you scream whether you wish to or not.”

I stayed up late reading it, wanting to see how it ended, how Caelius and Gaidres found their way to each other. And although I was disappointed with the “OMG, I think you’re dead, which only makes me realize how much I adore you so please be alive — yay you’re alive!” ending, which to me seems like lazy writing (or maybe just bullheaded characters?), I still enjoyed the story overall. Maybe that was because of the unusual setting and the consistent historical feel, but I think it was also because the characters, however inconsistent in details, were compelling overall.