REVIEW: The Eye of Ra by Dakota Chase

Ever since I started reading more LGBTQ books, the various books published by Prizm have been on my radar.   I love genre fiction just as much as literary fiction, and seeing a ‘gay’ take on the usual YA tropes is always fun.   Your book being a time-travel plot-line really had me intrigued, and I’ve always liked Egypt as a setting – especially in historical novels. 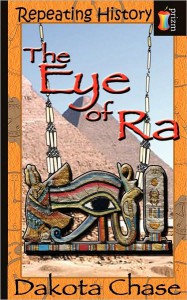 Aston and Grant are ready to call it quits.   They both did some less than favorable things in their past – Aston stole a car, and Grant broke into an office – and are stuck at Stanton School for Boys until they become more well behaved.   Aston is determined not to make a mess of himself this time, but   he gets in trouble in class on the first day with Mr. Ambrosius, his eccentric history teacher.   His new roommate, Grant, doesn’t escape punishment either.   They are sent back to Ambrosius’   office to be dealt with later.

The boys get into a spat and start throwing punches and yelling at each other.   They break a few precious objects that clutter Ambrosius’ office and start a small fire.   Ambrosius isn’t too happy, but gives them a chance to redeem themselves.   They have to travel back in time and find the ancient objects they destroyed and bring them back to Ambrosius – who is actually the wizard Merlin.   While they don’t really trust Merlin, retrieving the objects sounds a lot better than going to jail for causing so much damage.

They are first assigned to get the Eye of Ra, an amulet worn by the boy-king Tutankhamen in ancient Egypt.   Their journey there is framed with forming an unlikely friendship with the boy king in their attempt to get the amulet from him.   With the disappearance of the queen, a power-hungry royal adviser, and Aston’s budding attraction to Grant, the boys are in for a hell of a ride.

As with the other books published by Prizm, The Eye of Ra is genre fiction, so the angst and melodrama of the teen psyche are in the background of the time-travel adventure.   Aston is a decent protagonist, and Grant works well with him, but the characters aren’t that fleshed out.   Aston goes through some changes – mostly in being a more trusting and responsible person via his friendship and loyalty to Tut.   His attraction to Grant was well done, and I liked that he didn’t have much angst aside from the ‘Does-He-Like-Me’ fears that we all get.    The same goes for Grant.   I would have liked to see a lot more death from him.

King Tut I enjoyed a lot more, and felt like the humorous situations that he brought to the table were much lighter and made the novel fun.   Merlin was almost non-existent, and I really felt like his existence as the wizard Merlin was cliche.   He doesn’t have much of a background, and I really felt like you could have left him mysterious.   Or at least given him a bit more of a presence or purpose other than being the time-travel device.

Grand and Aston as a couple, however, I was much happier with.   For genre fiction like this that doesn’t focus on the romance, you can’t really expect much, but there were more than enough cute scenes and nudges for me to be satisfied with how things went.   You also left room for development in later books, which I am happy about.   The pair of them made for some of the best scenes in the book for me, and I was glad there was some establishment of relationship by the end of the book.

Time travel plots aren’t that overused in YA these days.   You don’t see too many of them marketed at older readers.   The Eye of Ra does this plot-line pretty well, and I’m mostly happy with the overall presentation of it.   Historical accuracy was just enough to make it seem real, and I actually learned some things about Tutankhamen’s rule that I didn’t already know.     Your spin on fate taking things, thus making the time-travel butterfly affect untrue, was interesting.   I liked the idea of not having to worry about the characters disrupting the flow of time, because that would have been annoying to read about over and over again.   The ending was a cliff-hanger, and while I wasn’t happy with it, it sets up the next book in the series, though it doesn’t give away the next item or destination.   The action scenes and intrigue of the Egyptian court were really interesting, and I especially liked the scenes where they went over simple customs, such as dress, the use of face-paints, and the bathroom.   The little things really made the book feel alive, and I felt like I was seriously in Egypt.

Another thing that put me off was the opening line.   The rest of the book is well edited and much more precise, but the opening line really had me questioning your ability.   It isn’t the worst opener by any means, but it could have been broken down.

When the gravel hit the small oval of polished wood on the bench as the judge called the court to order, the sound rolled through the courtroom like a thunderbolt.

This could easily be disassembled into something that flows well.   Reading it just felt really clunky, and since the beginning and ending of a book hold a lot of weight for the reading experience, I felt like it was something to address, especially considering the clunky writing there isn’t anything like the writing later on, such as this romantic scene between Aston and Grant.

I don’t know if he moved forward, or I did, or both of us at the same time, but our lips touched.   Did you ever touch a battery with the tip of your tongue and feel a tiny electrical spark?   That was how the kiss felt, tingly and warm.   It was the kind of kiss that haunted my dreams, not at all like the bruising one we’d shared back in Tut’s palace.   My jumped to attention, as if our lips were playing reveille to the troops.

A small voice spoke inside my head, telling me to back off.   Neither of us were ready for anything more than a simple kiss; certainly not on the eve of battle in the middle of ancient Egypt.

The Eye of Ra was a decent start to a new series, and it was really cool to see this average trope with a gay twist.   We need more books like that.   The characters didn’t connect with me as singular people, though their relationship was fun and written well for a side-lined romance, and the plot was exciting enough to make it a quick read.       The ending and beginning are rocky, but the majority of the novel is a smooth, light read that you will enjoy.   I really look forward to more fleshing out and development in the second installment.   C+