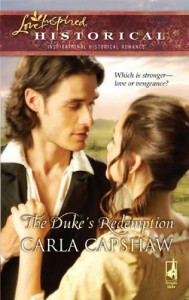 Thanks again for offering me a copy of your second Steeple Hill Historical romance, “The Duke’s Redemption.” But while I enjoyed the – once again – different setting used in this inspy – this time Charles Towne, SC in the waning months of the American Revolution – overall this book didn’t work quite as well for me as your first one.

He came to the colonies for one reason: revenge. Drake Amberly, Duke of Hawk Haven, won’t leave South Carolina until he’s unmasked the colonial spy who killed his brother. Yet the more he sees of spirited Elise Cooper, the more he’s moved by the happiness she brings him-never suspecting the dangerous secret she hides.

Her faith drives Elise to spy for the rebels, dreaming only of freedom for her homeland. Then she meets Drake, and learns that love could be hers, as well. When his pursuit of “The Fox” brings him dangerously close to the truth, she’ll risk everything to prove that love and forgiveness are all they need.

Well, it isn’t really her faith that drives Elise to spy, is it? Yes, she’s an American patriot but I get the impression that this isn’t what truly gets her motivated. Instead it’s a subplot that I give you lots of bonus points for including – the fact that her half sister is a slave and by spying, Elise has the chance to earn Prin’s freedom. I can’t recall many books utilizing this time period when slavery is mentioned at all much less one that has a major secondary character who is a slave.

Elise is a bit of a problem for me though. She’s supposed to be one of the best spies in the area yet how much spying is she going to be able to do when she’s always wearing a mask? I know this is to set up the mystery of her identity and allow it to remain until almost the end of the story but it makes little sense. And then she has initial doubts about Drake, feels he’s up to something and doesn’t trust him yet suddenly – when she begins to have feelings for him – she’s defending him to the other spies in her spy ring in the face of the mounting evidence of his real identity. In other circumstances I might buy her defense but in this case it’s her life, as well as those she cares for, which is on the line. Mention of how captured spies were normally hung is repeated enough over the course of the story.

Drake, once I got over the fact that a Duke would leave England on a mission of revenge thus leaving all his dependents, responsibilities and properties in the lurch, I feel plays his role better. When he’s given the standard “my wife didn’t love me and my fiancee was a cheating slut” background, I did worry. “Oh noes” I said, “Not one of those types of heroes.” But despite an initial scattering of mistrust of all women, Drake quickly falls for Elise and treats her honorably. Even after he discovers the truth about her, he still just mainly avoids her instead of taking his anger out on her. And when the rubber meets the road, he comes through and doesn’t drag out a reconciliation out of pique.

Another thing which impressed me about the book is the fact that no side is presented as a saint while the other is an evil ogre. There is good and bad on both sides. Each side makes mistakes and each can act honorably. The character of Zechariah is especially
multifaceted. He’s a true Machiavellian person willing to threaten some distasteful things to get the end he wants. Did you make him this way so that the English hero would be the more honorable man?

You create great conflict between your heroes and heroines. There’s no doubt that Elise is involved in the death of Drake’s brother even though she didn’t actually pull the trigger. The issue which could divide these two isn’t gray and there’s no perhaps or perhaps not. It’s something they will have to work out and accept. I like this in a book rather than some silly misunderstanding that could be cleared up with a short conversation. But the clearing up here feels rushed. I know that the actual amount of time is longer than it seems – I would think due to word count limitations – still I would have liked the appearance of more time spent coming to terms with the issue.

As a whole, this is a good sophomore book. I cared about the characters, I like the use of an unusual setting for an inspy – and appreciate the fact that the action, especially the spy parts – isn’t all sweetness and light. If the heroine had come across to me as a more competent spy and the conflict resolution had worked better, my grade would be higher but as it is, I’ll give it a C+

~Jayne
This book can be purchased at Amazon