REVIEW: The Dragon and The Pearl by Jeannie Lin

I’m thrilled that you are writing this series and thrilled that Harlequin is publishing it and giving us such in-your-face Asian covers instead headless bodies that hint at its Eastern origins. I am not super familiar with this area of history and I read this story more as if it were a fantasy tale instead of historical romance. Not sure if that affected my reading but that’s my perspective. 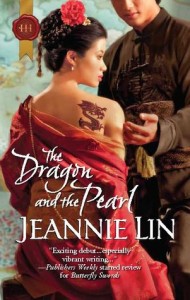 What I am less thrilled about are some of the authorial choices that were made.

The Pearl is a beautiful and famed courtesan named Lady Ling Suyin. Her honorific title is Ling Guifei which means “Precious Consort.”  She is considered to be the late emporer’s favored courtesan because after having her in his bed, he never took another. When he died, she was retired to a manor on the land within the Imperial province of Chengdu where she hoped to live out her life in peace. However, with the new emporer in place, loyalties are being tested and war is rumbling across the land. General Gao Shiming is rumored to be in pursuit of Ling Guifui and this leads to her abduction by The Dragon, Governor Li Tao.

Li Tao commands an army and land in the South.  He feels his obligation is to hold the Southern border as commanded by the previous emperor even if this is countermanded by the existing emperor.  He knows war is coming and Emperor Shen has not shown the power to unite the military governors spread across the vast China land. Li Tao had considered it an alliance, had accepted Emperor Shen’s daughter as a peace offering but she married another, and thus no alliance  was struck. Li Tao not sure what is important about this courtesan but whatever it is, he plans to pull it out of her one way or another.

Neither realize their commonalities. Their past is similar, the holds over their lives, threatening whatever peace they may have thought to have achieved, is similar. What is different, perhaps, is that Li Tao is resigned to death. He has always known that dark hand was near him and therefore what is a doomed battle against the new emperor but destiny?

Ling, however, is willing to fight for her survival. Years of palace intrigue taught Ling to school her features, hide her thoughts, and read others like a fortune teller reads the tea leaves.  Her beauty was only one of the tools in her arsenal.  Ling and Li fall in love slowly, coming to appreciate in each other the sacrifices that  made them who they are today and the need they both had for companionship.  They both experienced a very dark time in their life and committed some very bad acts.

In Butterfly Swords, there seemed to be pains taken to show that there were no villians, only people with different perspectives, but in this book there were definitely people who acted villianous and yet the resolution for these people was akin to a stern (or even quiet) talking to. I failed to see the gray in the actions of Gao or the underworld boss, Lao Sou, who used people as if they were things, weapons to be used and discarded when no longer potent.

The defanging of one particular character in the story was troublesome because of how I was asked to see him as some harmless old man in need of loving family when, in fact, he recruited young helpless boys off the street and bound them to him with acts of violence and promises of vengeance.

I felt like some message of peace and tranquility was being delivered, but it was a sermon I didn’t quite understand. I felt cheated in the denouement and while I loved the journey I was taken on, I found the destination disappointing.  It’s tough to grade this book because some of it was beautiful and I loved the setting and the richness of the period.  I thought Ling and Li Tao were well matched.  But there were some big moments of disappointment particularly the as it related to Ling* but mostly how the story was unwound at the end.  C+

[spoiler]*Ling is a virgin courtesan and was a virgin because Emporer Shen was wounded in battle and could no longer get an erection (or at least that is what I understood).  He elevated Ling to Precious Consort as a cover for his loss of manhood.  His fascination of Ling was understood to be why she was a favored concubine.  I understood this reason but it irritated me as well. [/spoiler]