REVIEW: The Book of Blood and Shadow by Robin Wasserman

I’m a sucker for an evocative title, even more so than I am for a striking cover. And for me, you don’t get more evocative than The Book of Blood and Shadow. It caught my eye immediately on NetGalley. On top of that, the premise sounded different. That’s not something you can say often in the young adult genre these days. Having finished the book, I agree with my initial impression — it is a different book. At the same time though, I’m also forced to concede that it’s also a strange book. 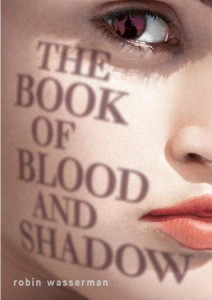 Nora Kane comes from a broken family struggling to maintain a semblance of normalcy. Her older brother died in a car crash because he was driving while intoxicated and took the town’s golden girl with him. After his death, her parents kept up the facade of a functioning marriage even though they might as well have been strangers to each other. Forget even paying attention to it. And of course, Nora is treated like a walking freakshow at school.

When she gets a scholarship to Chapman Prep, Nora sees this as a chance to start over. She can pretend she never had a brother whose screw-up led to such devastating consequences. Unfortunately, her plan hits a speed bump when she meets Chris, an older boy who knew her family from before and is aware of brother’s existence and worse, exactly what he did. But to her surprise, he understands Nora’s reasons for pretending and keeps her secret. And so Chris, along with Adriane (a friend of Chris’s who would later become his girlfriend), accepts Nora into his circle and the three of them become the best of friends.

Things change when Nora, along with Chris and Chris’s roommate Max, begin to translate a series of ancient documents, among them the Book of Blood and Shadow. Nora, however, isn’t trusted with that task and instead is assigned a series of seemingly unimportant letters to translate. But it soon becomes apparent that while the letters appear innocuous, they’re anything but and may hold the key to the alchemical formulas contained within the Book. It is a key that people would kill for, as Nora soon learns to her everlasting regret.

While I don’t place much importance on subgenres myself, I do find them useful when discussing novels with other people. The Book of Blood and Shadow makes pinning down a genre difficult. It’s not a paranormal or fantasy, not in the way we consider it. Based on the premise I want to call it a thriller but the execution lacks the breakneck twists and turns I associate with the genre. I suppose the mystery label comes closest when looking at execution and style. But if anything, I’d call this the YA version of The Da Vinci Code.

I enjoyed the relationship aspects of the novel the most. Nora’s relationship with her family — the nonexistent one with her parents, the way the ghost of her dead brother haunts her steps — affects everything she does and how she looks at life. Nora’s ambiguous friendship with Chris was also enjoyable. He was the friend, the one who understood her best, the one she loved but didn’t dare go after because he was so out of her league. I sympathized with her after Chris and Adriane began going out. What happens when two of the people in a trio of best friends start dating? Where does that leave the third person? Do they become a third wheel or is there still room for them to fit? Even the part where Adriane wants Nora to hook up with Max was believable. She wanted her best friend to be happy too.

On the other hand, I’m conflicted about Nora’s relationship with Max. It was obvious from the start that she was settling and I could accept that from the POV of someone wanting to move on from being in love with her best friend. But at the same time, I had a hard time buying it since Nora starts off thinking he’s creepy and weird. I think we were supposed to see how Nora’s opinions of him changed over the course of translating the documents but that’s a tough transformation since the beginning of the book tells us that Max is believed to be a murderer.

While I enjoyed the parallels of Nora’s life with that of the woman whose letters she was translating, I found the mystery aspects to be the weakest parts of the book. Part of this, I think, is because of the way the book is written. It’s slow and almost dreamlike in some aspects, which doesn’t mesh well with a murder mystery style plot. Nora essentially goes globe-trotting to find Max and clear him of murder, but the execution lacked a certain level of excitement and suspense.

In fact, the further we moved away from the mundane pains of every day life into the world of secret societies and alchemical machines able to grant a direct phone line to God, the more the book faltered. The letter translations were meant to increase dread but as the book continued, the more I found them tedious. When the bulk of the action began to happen in Prague, I should have been excited but instead I found each event even more unbelievable than the last. It was almost as if we moved from one coincidence to the next and then again to another.

Then we got to the climactic revelation about Nora and Adriane. I was truly unthrilled about this. While I understood Adriane’s point — the relationship between Nora and Chris was truly something special — I didn’t care for this twist. Nora’s only female friend in the entire book, and this is what we end with: girls jealous of other girls because of boys. So cliche, and it stands out even more because there really weren’t many women in Nora’s life. Where are the books where girls can be friends with other girls and don’t fight over boys!

While I enjoyed the prose and most of the relationship aspects and portrayals, I thought The Book of Blood and Shadow had some serious flaws. I think its elements were trying to come together to tell us about life, death, and faith but the unevenness of the novels’ second half failed to deliver the thematic resonance. All things considered, this one is a C+ for me.