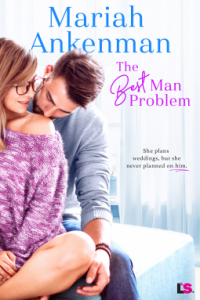 Lilly Walsh is used to keeping things buttoned-up and aboveboard. After all, the last time she hooked up with someone in a wedding party, it nearly cost her her wedding planning business. Thankfully, those rules don’t apply when she meets a handsome stranger in a hotel bar. One bad pirate joke leads to the best night of her life, but come morning, she’s got a wedding to plan.

Lincoln Reid never imagined he’d see the woman who rocked his world last night and then ran out on him ever again. But there she is, planning his best friend’s wedding with the same passion and drive that brought him to his knees. She’s adamant that wedding planner and best man can never mix, but that just means he’s got four weeks to make her see him as more than just a one-night guy. Because he’s itching for more than one night…or five, or ten…

Dear Ms. Ankenman,
I was aware that this is the second book in a trilogy but despite starting out with the wedding ceremony of the couple featured in book one, I didn’t feel lost or that their story was being shoe horned into this one. “Best Man” got off to a rousing start and I settled in to enjoy myself.

Lilly is delighted that one of her best friends and business partners has found her “one and only” as well as becoming a mommy to adorable twins (who are almost totally unseen in this book). But she can’t help feel a little envious of that joy. Lilly’s had issues with marriages and HEAs while growing up (which makes her choice of career as a wedding planner a bit strange) as her mother has flitted through four husbands as well as Lilly’s sperm donor who took off after being told of his impending fatherhood. Nevertheless, Lilly would like to find someone to share her life with.

Who she finds right now is a cute guy at the bar who tells lame pirate jokes with great enthusiasm and who makes Lilly laugh as well as want to strip his clothes off. A night of high energy and mind blowing sex ensues after which Lilly wakes up delighted that she’s had an honest-to-God one night stand. From what she remembers, Lincoln (there – she does at least know his name) is from out of town so Lilly shimmies out of the hotel room without leaving a note, a cup of coffee or her contact info as she thinks she’ll never see him again.

So of course she sees him again. Lincoln immediately recognizes one of the wedding planners who is handling the ceremony for two of his best college friends. A little hurt that she left without even saying “bye” over her shoulder, this might be his chance to remedy that. Except that Lilly telegraphs with her eyes that she doesn’t want anyone to know they have History. Lilly does actually have a good reason for her “no dating anyone in the wedding party” rule but can’t seem to keep from continuously blurting out things to and about Lincoln that clearly signal he’s got her hot and bothered.

Understanding Lilly’s desire to keep from muddying her professional waters and encouraged by the fact that she keeps saying things like she thinks he’s sexy and a great lover, Lincoln is willing to wait until after his friends’ wedding to see if their chemistry remains white hot. But even though they scorch the sheets, is there any future in this relationship?

Though I liked the opening section and feel that Lilly’s got a real reason to keep her interactions with wedding party members impersonal (while seeing that they have a marvelous wedding – because she’s good at what she does), her back-and-forth, hot-and-cold relationship with Lincoln got tiresome. Yeah, yeah sexual tension must be built but she’s frankly insulting to him a time or two when she tells him she’s keeping a list of why they wouldn’t be able to keep up a long-term commitment before Lincoln has even said he’d be interested in that.

Because yes, Lincoln has his reasons for wanting to keep things light and merely hawt with no plans for forever. Lilly is the Queen of Mixed Signals though she’s putting out enough interest and staring at Lincoln so much that soon everyone knows their feelings of hawtness and is trying to move this couple along towards at least hitting the sheets if nothing else.

And we have to be told over and over (and over) why neither one is interested in long term and recount all their past emotional woes lest we forget. Yet I will say that the final conflict is a product of clues we have been given all along, which was nice, instead of blowing up out of nowhere and they both soon realize that they need to clear the air about it. I appreciate that both of them think hard about what caused the rift and whether or not it’s worth solving.

In the end, I was happy to see them get together but I still had a few issues. The relationship had moved past merely lots of hawt sex but maybe not quite enough. Then there is how Lilly suddenly becomes the Voice of Reason in explaining the need to take a leap of faith in love when not long before she’d been just as confused and hurt as Lincoln. The secondary characters were fun and I almost enjoyed them more than the MC relationship. This one works well alone, Lincoln does a nice apology, time is allowed for the two of them to get to know each other better but I’m not sure I’ll continue with any more in the series. C+
~Jayne