REVIEW: Beauty and the Blacksmith by Tessa Dare

I may have had it with Spindle Cove, your Regency-era haven for unusual young women and the men who love them.* The place has become nettlesomely toothsome, rather like Gwyeth Paltrow gushing over adorable organic baby blankets. This novella, Beauty and the Blacksmith, is a quick, easy read, the equivalent of a too small serving of trifle served with a half cup of over-sweetened tea. 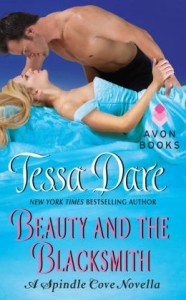 The fairest maiden in Spindle Cove is Diana Highwood. Diana is the well-behaved sister of my favorite of all the Spindle Cove spinsters, Minerva, the heroine of the very amusing A Week to Be Wicked. In the books preceeding this one, Diana’s role has been to be a gorgeous, delicate foil for her matrimony-obsessed mother, Mrs. Highwood. Mrs. Highwood is a good example of why I’ve grown tired of quaint Spindle Cove. In every scene she’s in, she makes the same inane assertions. Diana is so lovely, every titled man in England must fall for her. Diana is so striking that if she’d just try a bit harder, she could land a Duke. She’s a one punchline joke I’ve encountered too many times.

In Beauty and the Blacksmith, Diana, like the reader, is uninterested in her mother’s marital schemes. Diana doesn’t want to wed any of the men her mother keeps throwing her at, for Diana has fallen for the village blacksmith, Aaron Dawes. She thinks he’s hotter than the forge he’s always banging away on. (I will refrain from making a smutty pun.)

Goodness. Just look at it. Thick as my ankle.

Diana Highwood took her glove and worked it like a fan, chasing the flush from her throat. She was a gentlewoman, born and raised in genteel comfort, if not opulent luxury. From an early age, she’d been marked as the hope of the family. Destined, her mother vowed, to catch a nobleman’s eye.

But here, in the smithy with Aaron Dawes, all her delicate breeding disintegrated.

How could she help staring? The man had wrists as thick as her ankle.

As always, he wore his sleeves rolled to the elbow, exposing forearms roped with muscle. He pumped the bellows, commanding the flames to dance.

Broad shoulders stretched his homespun shirt, and a leather apron hung low on his hips. As he removed the glowing bit of metal from the fire and placed it on his anvil, his open collar gaped.

Aaron has the hots for her too. Not only is she the most beautiful girl in the world, she’s kind, resourceful, smart, too good for him, etc… Aaron knows she’s above his station but damn, it’s clear she’s as attracted to him as he is to her. He knows this because, for the last two years, she has brought him every piece of metal she owns to be repaired.

“I wonder about it. Why you come so often. Why every metal latch and clasp and rivet you possess seems to need mending of late.” His voice grew deeper, almost dreamy. “I’ve told myself you’re just bored with this village. With this weather, there’s little else to do.”

He circled her, running his finger beneath that chain. Branding her with a necklace of his touch.

“Other times”—she caught a wry note in his voice—“I decide you’ve been sent by the devil to torment me for my sins.”

He came to stand before her, holding that vial that dangled from her necklace. He pulled gently, and she swayed toward him. Just an inch.

“And then sometimes I think maybe . . . just maybe . . . you’re hoping for something to happen. Something like this.”

She swallowed hard, staring straight into the notch above his sternum. That shamelessly sensual crossroads of bone and muscle and sinew and skin.

The heat of him swamped her. She felt . . . It was so very odd, but she felt ticklish. As though every inch of her was exquisitely attuned, anticipating his touch.

Perhaps he was right.

Perhaps she had been wanting this.

He released her necklace. “Well?”

She gathered her courage and looked up at him. Outside of social calls and dinner parties, Diana had little experience with men. But if there was one thing her genteel upbringing had taught her, it was how to read an invitation.

If she gave Mr. Dawes the slightest encouragement . . .

Oh, heavens. He would kiss her. Those strong, sensual lips would be on hers, and his powerful arms would hold her tight, and there would be no taking the moment back. She would leave with a changed understanding of herself and smears of soot on her best blue frock. In the eyes of the world, she’d be soiled.

Diana does run away the first time he tries to kiss her, but not the second, and before you can say once upon a time, the beauty and the anything but beastly blacksmith have fallen in love.

This slight novella tells Aaron’s and Diana’s story quite straightforwardly. There’s nothing but reality standing in the way of their HEA, but, hey, this is a fairy tale.

I liked Aaron and Diana and Ms. Dare infuses her prose with her usual well-done heat. But, there’s little here (with the exception of a very odd and yet funny story about mysterious suitor named Mr. Everwood a Spindle Cove spinster named Miss Bertram natters on and on about) that’s new or exciting. And, all the things that have begun to grate on me about Spindle Cove exist in abundance in Beauty and the Blacksmith. I give it a C+.

*It turns out I’m not ready to abandon Ms. Dare’s Spindle Cove series. After reading Beauty and the Blacksmith, I read the next book, Any Duchess Will Do. It’s delightful.