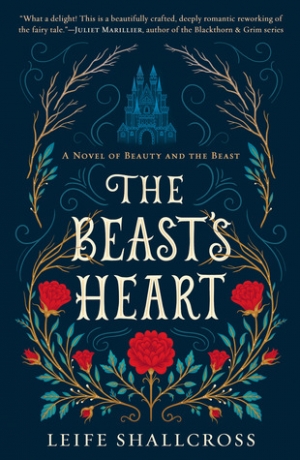 When I heard about this retelling of Beauty and the Beast from the Beast’s point of view I was excited. I am a hero-centric reader in general and hero POV always attracts me. Added to that, Beauty and the Beast is one of my very favourite fairy tales. Also, as a fellow Australian, I wanted to wave the flag a little too.

The Beast’s Heart is a fairly faithful retelling, but with some notable differences – not all of which I’ll go into here as at least one of them is a spoiler (and a pleasant surprise as well). It’s set in France in ye olden days and the language is very fairy tale-esque. At times I found it a little dense and I tended to enjoy the novel in smaller bites rather than long reading sessions because of it.

To be honest, most of what I remember about the fairy tale comes from the Disney movie these days (even though I had a beautiful picture book as a child that I loved). In this book, “Belle” is Isabeau and she has two older sisters. The Beast observes what happens in their lives and the life of their father via a magic mirror. At first I thought the sisters were going to be the “ugly stepsister” type (wrong fairy tale I know) but actually they were not. After that very first observation, Marie and Claude show themselves to be good women and they step up. It seemed to me that Isabeau had kind of been enabling them by doing everything for them. When she was gone, Marie and Claude were forced to act and they were the better off for it.

I have a confession. I actually enjoyed the sections about Marie and Claude more than the other parts of the novel. There is a romance and HEA for each of them as well so the book is kind of a three-fer.

The parts about the Beast and Isabeau became a bit samey and there were things I didn’t understand. For instance, narratively, I didn’t get why the Beast, once he worked out that for the curse to be broken Isabeau had to love him, decided his courtship would basically consist of marriage proposals. I get that this is straight from the fairy tale but in the book it didn’t make sense to me. Here, I’d have liked more narrative justification or a departure from the original tale.

“You must find the woman you truly love,” she said, “and inspire her to love you in return. When she agrees to marry you, the curse will be broken. Those are the terms.” She was watching for my reaction again, and now her expression contained a challenge. “Of course, you may not tell her you are cursed, or that if she agrees to marry you, you will regain your human form.”

I stared at her in despair.

“How—” I started to say, but she waved me silent.

“The how is up to you. If you want to break it, you must find the how.” She smiled again, but this time it was a little wry, and a little sad. “You see, it is still about the nature of your heart. You cannot hide your true self behind appearances forever.”

What puzzled me for most of the book was that the Beast didn’t seem to be a bad guy. Unlike the fairy tale (or the Disney movie) he wasn’t cruel or unkind. His “lesson” didn’t seem to have much to do with becoming a good person. He seemed to already be one, striving to be the antithesis of his licentious, violent father.

My hatred of him and all he had stood for had governed my every action. I had tried to make myself into his antithesis. In the face of his dissipation and licentiousness, I had modeled myself on hard work and restraint. Where he neglected his duties, his lands and his tenants, I saw to them rigorously, in a fever of righteousness and exactitude. No frivolity was permitted, no lapse went unpunished. Where he neglected himself, I made my appearance a point of fastidious pride. And where his lasciviousness and reputation for lechery had made him a figure of terror for every young woman in the vicinity, I eschewed the company and the advances of all women.

The explanation, when it finally came, didn’t entirely satisfy me. The curse seemed particularly mean and given it wasn’t done for a slight or harm, it felt unjustified. However, the Beast’s character on the other hand was much more palatable to the modern reader. He hadn’t done anything truly terrible* and he was not an abuser of women or a gambler or a drunkard or anything like that. *There is some mention of a duel late in the book but I didn’t think that was particularly curseworthy – other reader’s mileage may vary on that.

I was glad there was no “Gaston” character in the novel. If anything, Isabeau’s father is the bad guy but even that’s a stretch. That said, I didn’t have a lot of sympathy for him at the end.

The denouement of the book felt underdeveloped. The magic was quite convenient at times. Still, I did appreciate that the Beast made a deliberate choice not to do to Isabeau what her father was doing.

There was also the beginning of what could have been a really interesting section about the Beast’s virginal status and his fear of sex but it wasn’t really taken anywhere. It’s a pity because I felt that could have been really something.

Perhaps another reason I read the book in smaller bites was that the characters were, for the most part, good. Mostly, good things were happening to them and there wasn’t a lot of tension or conflict. At least, not until very near the end of the novel. I don’t mind reading low-conflict books from time to time and, as I said, I did quite enjoy the slice of life/gentle romance combination of Marie and Claude’s storylines, but combined with the somewhat dense writing style (a la fairy tale) I found I became a little bored if I read for too long.

I struggled to come up with a grade for The Beast’s Heart. I liked it well enough and there were some things in it which worked really well for me. Others, not so much. In the end I settled on a C+.