Warning: mysqli_query(): (22032/3141): Invalid JSON text in argument 1 to function json_contains: "Invalid value." at position 0. in /home/customer/www/dearauthor.com/public_html/wp-includes/class-wpdb.php on line 2187
 GUEST REVIEW: The Baron Next Door: A Prelude to a Kiss Novel by Erin Knightley
July 23, 2014

GUEST REVIEW: The Baron Next Door: A Prelude to a Kiss Novel by Erin Knightley

[themify_box]Elaina started reading romances in high school, but only started telling people she read romances within the last few years. Historicals will always remain her favorite, although she finds herself reading other genres depending on her mood. Favorite authors include Elizabeth Hoyt, Lisa Kleypas, Tessa Dare and Meredith Duran. She’s always on the hunt for innovative historical romances—especially non-Regency historicals—so drop her a line if you have a recommendation.[/themify_box] 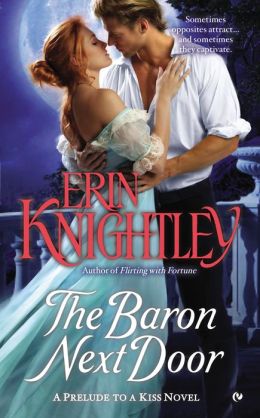 You’ve been on my radar for a while now as a new-to-me historical romance author, although it’s only until now that I’ve sat down and read one of your books. I was also intrigued to find out that your romances do not include any sex scenes—not even fade-to-black sex scenes. This is rare in romances, I’ve found, especially secular romances.

The Baron Next Door tells the story of Hugh Danby, retired army officer and newly made Baron Cadgwith, and Charity Effington, daughter of a viscount and Hugh’s next-door neighbor. Both have come to Bath for the summer, although for entirely different reasons. Hugh suffered a severe head injury in the war, which now causes him acute headaches, to the point of being bedridden. He has come to Bath to try the waters in hope of some relief.

Charity comes to Bath after having recently ended an engagement with her fiancé: he fell in love with another woman, and she was kind enough to release him from his promise to her. She travels to Bath with her grandmother to take part in the summer music festival. Charity not only plays the pianoforte but writes her own music. She plans to enter the music festival to show off her skills, although there are a few snags to this plan along the way.

Charity’s music, however, is unbearable for Hugh, as their homes are so close together that the sound of her piano playing triggers his headaches. Thus, when they first meet, it is when Hugh has suffered from an attack and rudely asks Charity to stop playing so he can have some peace and quiet. Charity, unsurprisingly, doesn’t take his command to stop playing well. The two start out on an awkward footing, one assuming he is an unmitigated ass, the other just wanting to be alone and in silence.

The strengths of this novel lie in the depiction of the hero, Hugh: his attacks are described in heartrending detail, making his brusque and rude behavior toward Charity plausible and even sympathetic. He believes himself a broken man and undeserving of a woman like Charity. I enjoyed watching Hugh come alive again with Charity’s help and overcoming his fears to embrace love and companionship.

Charity, however, remains a rather static character throughout the story, and quite honestly, I wanted to shake her more than once. She’s rather sweet and naïve, devoted to her music and not much else. Misunderstandings abound, usually with Charity taking offense without examining why Hugh is acting strangely. When Hugh opens up to her but then later leaves abruptly during a party when Charity is urged to play, she takes offense and assumes the worst. Hugh explains his infirmity, Charity feels guilty, rinse, repeat. Charity continues to assume the worst in Hugh, and this happens again and again as the novel progresses.

The novel also suffers from lack of actual romance in the first third, which features more of Charity and her two friends and fellow musicians, Sophie and May, than it does her relationship with Hugh. May, in particular, and her history is beyond farfetched to me. You see, May was born in the East Indies, grew up there, and is sent to Bath after her mother dies. May, we come to find out, is actually named Mei-li, although she is described as the quintessential English rose; neither of her parents is Chinese. Add to that, she describes her homeland as the East Indies—not England, as she does not consider herself English—and May becomes one of the most improbable characters I’ve encountered in a novel.

You will never convince me a 19th century English couple would name their daughter a Chinese name just out of sheer love for the country they’ve been sent to colonize. It’s a bizarre choice and threw me from the story, not to mention the sugarcoating of English colonization that results from this choice. There is also this weird blending of India and China into one mega-country, which seems odd considering how devoted May is to her “homeland” of China, which makes this entire part of the novel seem sloppy and unbelievable.

And the crème de la crème of this exotification is that May has brought along her Chinese maid Suyin (who we never see, mind you), who just so happens to be an expert in tui na, a type of Chinese massage. Of course, Suyin the Chinese maid is a magical masseuse from the East Indies. And conveniently, Suyin is able to teach Charity her massage techniques to help Hugh with his attacks. Convenient, those foreigners.

Overall, though, I enjoyed Charity and Hugh’s romance, as it was both sweet and heartwarming once they stopped misunderstanding each other. The parts where they talk on their respective balconies are the strongest and most romantic parts of this story, especially when Charity plays for Hugh. The story remained a solid B until the ending that brought in conflict for conflict’s sake mixed in with one of the most obnoxious romance tropes ever, a trope I wish would be banned for all eternity from romances.

So, with all that combined, I have to give The Baron Next Door a C+.