I already can hear readers groaning. “Oh no, not another post-apocalyptic novel!” Believe me, I sympathize. Thanks to The Hunger Games, post-apocalyptic and dystopian novels have flooded the young adult genre. But despite this, The 5th Wave caught my eye because while it is a post-apocalyptic novel, its premise is based on an alien invasion. Not a common theme in a subgenre filled with oppressive governments and scarce resources. 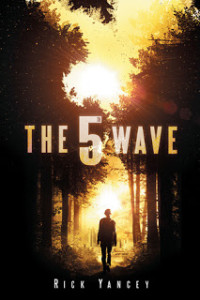 In your novel, aliens came to earth with the intention of taking it over. Of course, mankind’s presence is a problem so they unleash “waves” upon the populace. Each wave is an assault tailored to decrease the population. The first wave knocks out electricity. The second wave causes tsunamis. The third wave is a plague.

By the time the fourth wave rolls around, humanity lives in small pockets. This makes it easy for this next assault, which consists of aliens hidden in human form. Their sole mission is to kill the remnants of humanity.

It’s now the dawn of the fifth wave. By this point, there are few survivors and thanks to the fourth wave, they are unable to trust each other and remain isolated. It was an effective strategy. If you have no idea the person you just met is a human or an alien, how can you trust them?

Cassie is the sole survivor of a fourth wave attack. These days, her main purpose in life is to find her little brother who she believe is being held captive by the aliens. I really enjoyed Cassie’s early sections. Her paranoia and suspicion was extremely well done. The scene involving the wounded soldier with the crucifix encapsulated her character at that point in time: scared, unable to trust, and desperate. Fitting considering what had happened to the world, to humanity, and to her.

Unfortunately, this all changes when she meets Evan Walker. I wasn’t thrilled with his character. You know how so many YA novels have the creepy, overbearing love interest who does what he does for the female protagonist’s own good? Evan is that guy times ten. I found his behavior to be stalkerish. He lurk outside her bedroom door countless times, listening. He takes care of Cassie, by which I mean, keeps her in his farmhouse. He doesn’t share any of his secrets with her. While I think their romance was borne out of loneliness and a certain brokenness on Cassie’s part, I was so creeped out by Evan — and perhaps this is deliberate, considering his “secret” — that I couldn’t even pretend to be okay with it.

As you can guess, I thought his secret was obvious. Being deliberately vague so as to avoid spoilers, I think the lack of dramatic reveal could have been saved had more been done with it. What does it mean to be human? What separates human nature and alien nature? These themes come up over the course of the novel, and Evan would have been the perfect avenue to explore them explicitly. But since this didn’t happen, his character became something of a sponge who absorbs Cassie’s wants and desires instead.

On the other hand, Ben’s storyline left me cold. I think readers who like fictional depictions of the making and breaking of soldiers would like his parts more than I did. As for me, I spent most of the novel wondering when Ben and Cassie would meet. (It’s told early on that they went to school together and that Cassie had a huge crush on Ben.)

Which leads us to the final point. This is, of course, not a standalone and the first book in a series. It sets up a love triangle, or maybe even a love rectangle. If anything, that’s what turns me off to reading the next one. The romantic aspects were poorly executed here, and I’m not convinced they’ll improve.

That said, this book does have lots of action. Readers tired of post-apocalyptic and dystopian novels that are all emo and introspection might find this right up their alley. Does it live up to all the hype? (This was billed as the next Hunger Games.) That is another matter entirely, and my answer is no. C+