I’ve been a Meredith Duran fangirl since The Duke of Shadows was published in 2008; none of your books has received less than a B+ from me. So naturally each new book is eagerly anticipated. For perhaps the first time, reading That Scandalous Summer, I ended up feeling…disappointed. Further, I’m not sure I can elucidate exactly why. The elements are there, but somehow That Scandalous Summer ended up being less than the sum of its parts, at least for me. 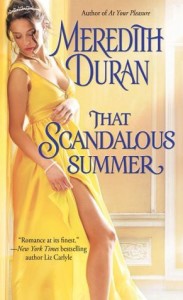 The story opens in London in 1885, where Lord Michael de Grey is paying a concerned visit on his brother, the Duke of Marwick. Alastair has shut himself away in his home, utterly distraught after finding out that his recently deceased wife was a junkie and a slut (not to put too fine a point on it) who may have leaked important political secrets that Alastair had shared with her to her lovers.

Michael wants to force Alastair to start participating in the world again, but Alastair meets this demand with one of his own: Michael needs to court and wed a suitable young lady, toute suite, or Alastair will withdraw his funding from the charity hospital Michael runs. (Michael is a doctor/aristocrat/bon vivant, a combination I found a bit hard to credit, but I don’t know enough to say whether it was historically plausible or not.)

Michael is truly shocked – he knows that Alastair can be a bit high in the instep, but the brothers have always been close. Alastair was always his protector, growing up. They’d had an unhappy childhood, buffeted by the chaos caused by their parents’ stormy marriage.

Michael makes the rather strange decision to flee London in an attempt to draw his brother out of the house and out of his self-imposed exile from the world. Why he thinks Alastair won’t just close the hospital immediately after discovering that Michael has skipped town wasn’t clear to me. He lands in the village of Bosbrea in Cornwall, and goes to work plying his trade in the guise of a simple country doctor.

It’s there that he meets Liza Chudderly, passed out drunk in his rose bushes. Michael tends to some superficial wounds, catches up on the area gossip about Mrs. Chudderly from his housekeeper and tries to avoid noticing how beautiful Liza is (aristocratic widows being Michael’s weakness).

Elizabeth Chudderly, a native of Bosbrea, is viewed by London society as a merry widow, but the reality is somewhat less rosy. Her lover, Nello, has just departed her manor house abruptly after discovering the truth: Elizabeth is very nearly broke. Attempting to drown her sorrows in a whiskey bottle has lead her to this mortifying pass, waking up in a strange place with scratches all over and a dreadful headache and a strange man telling her she’d been discovered in his garden.

Elizabeth and Michael are attracted to each other right away (in fact, there was a bit too much mental lusting for my taste), but each has reasons for not acting on the attraction. She thinks he’s a middle-class doctor, respectable but really barely above peasant status from her lofty social perspective. She needs to focus on finding a rich husband, not dally with someone whose lack of funds makes him entirely unsuitable as a long-term prospect. For Michael’s part, he’s pretty focused on his lame plan to make his brother chase him into the wilds of Cornwall. He’s also aware that in his “disguise” he’s no match for the fast and glamorous Mrs. Chudderley.

Of course, circumstances keep throwing them together: there’s a local bazaar both attend, and then Liza acquits herself well when forced to aid Michael in a difficult birthing for one of her tenants. In an attempt to distract herself from the tempting doctor (and possibly catch a wealthy husband), Liza plans a house party, stocked with prospects and replete with spiritualists as the entertainment. It’s there that matters start to come to a head between Michael and Liza.

Implausible set-up notwithstanding, the whole section on Bosbrea (the bulk of the story, by far) should have worked for me. I loved the unconventional the couple’s unconventional meeting. The tension caused by Michael’s disguise was an interesting conflict, and on paper, both Michael and Liza are appealing characters.

Part of the problem, I think, is that the story and characters just didn’t have as sophisticated or nuanced a feel as I’ve come to expect from this author. Their actions and reactions are a bit predictable. Michael is a doctor dedicated to the poor and also a rake dedicated to boning pretty ladies. Now, that could be realistic (I guess) or interesting, but here it just feels a bit distasteful and clichéd – the hero who is super-virile but also a good guy underneath it all. I would’ve liked to see some of the complexity of his backstory dealt with more fully – he and Alastair really had crappy childhoods, and it clearly affected them (each in their own way), but the issue is never really dealt with or resolved. I guess I’m supposed to believe that Michael is healed by true love. Which isn’t uncommon in romance, but again, is a bit more simplistic than I’ve come to expect from this author.

Also, I guess when it came right down to it, I just didn’t like Michael that much. There’s something a bit sleazy about him, a bit shallow and “off.” One example is how he at times seems to find the whole “hiding from the brother” thing to be a lark, despite the stakes on his end (the hospital) and his supposed concern for his brother’s mental and physical health.

Elizabeth has issues that similarly are not fully dealt with. The story of her unhappy marriage came out in dribs and drabs and honestly wasn’t that clear to me, even by the end of the book. There are some pretty strong hints that she has a drinking problem, which I thought was interesting and unusual, but the issue disappears with the HEA (another case of “healed by love”, I suspect). One thing that I did like was the depiction of Elizabeth’s grief over losing her mother – she has a lot of guilt and sadness that keeps her from fully dealing with the loss, and I thought that was very well done and made Elizabeth a more interesting and sympathetic character. Ultimately, I liked her better than I liked Michael, but she just wasn’t *that* interesting to me.

All in all, That Scandalous Summer was a story with a lot of potential that it never quite fulfills. It’s not a bad book, but I’ve come to expect more than “not bad” from this author. My grade is a C+.