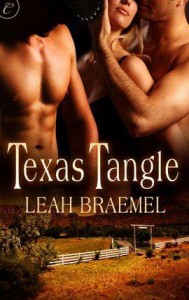 Nikki is a damsel in distress. Her no good cheating husband left two years ago. Her no good derelict brother is draining her dry. Her ranch is on the brink of bankruptcy and her truck just died. (This reminds me of the joke about country music. What do you get if you play a country record backwards? You get your girl back, your dog back, your truck back, etc).

The one thing that Nikki does have is good friends. Her neighbor, wealthy landscaper Dillon, is always offering her a helping hand. (As another aside, I was watching the Last American Cowboy on Animal Planet and damn, ranching is hard. Ned and I have a side bet as to whether the young couple that is portrayed on the show will actually stay married.).

When Nikki finds that her home has been robbed, right down to the clothes in her closet (that remained a WTF moment for both Nikki and me throughout the book), she has little option other than to accept Dillon's invitation to stay in his home.

For Dillon this is pretty much a dream come true. He's always loved Nikki but so did his best friend and foster-brother, Brett, and their competing feelings for Nikki drove Nikki to leave the both of them for someone entirely different. This time, Dillon has Nikki in his house, in his bed, and he's ready to explore those feelings in hopes of creating a permanent home for them together. Except-well, the Brett thing isn't going away.

Some of the book was a bit ridiculous. For some reason, Nikki had to be totally alone. Even her parents berated her for not supporting her brother who was probably responsible for Nikki being robbed. I guess the contrast was there to show how much Dillon wanted to be part of her life and how truly heroic he was but I felt that it was overkill in trying to eke out sympathy from the reader for Nikki. She's alone! Needy! Desperate! I get it!

Brett, Dillon's best friend, is a Barnett only by way of friendship and acceptance, not by blood or by name. Brett had a terribly background and the Barnett's informally adopted him. His desire to be part of the Barnett family wages war with his desire for Nikki. Dillon knows that Brett has had a less than stellar upbringing and he also realizes that if it weren’t for his jealousy driving Brett and Nikki apart years ago that he would never have this current chance with Nikki. Dillon and Brett put Nikki in the difficult position of having to choose. I don’t think it’s a spoiler to say that this is a ménage story because, ah, look at the cover. But I suppose the issue of whether this is a permanent ménage or one of them gets shunted aside is a spoiler.   So spoiler ahead (use the cursor to highlight the text)

| nook | Books on Board | Carina Press