Novellas are often an unfortunate way to be introduced to a series. I’ve not read any of your Lost Girls series–Tempting Fate is book three. I think had I read the books that preceded it, I would have seen all three of the major characters in Tempting Fate differently. Unfortunately, without that back story, your leads and their stories didn’t resonate for me. 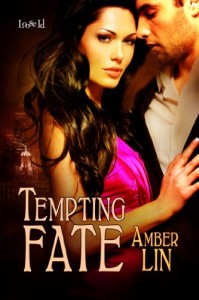 Tempting Fate is narrated by Rose Murphy, a twenty-six year old ballerina who is ready to hang up her toe shoes and open her own ballet studio. Her joints hurt constantly and she’s worried she’s doing permanent damage to her body. There are two obstacles standing in the way of her dream. The first and most forbidding is her older brother, Philip; the second, finding a safe place in Chicago she can afford.

Philip is bad news. Here’s Rose’s description of him:

Philip was a criminal. Not the whitewashed, white-collar type to embezzle money or take the company jet out for a spin. He was an honest-to-God bad guy, grown up like a weed between the white trash of Chicago. Strictly speaking, he shouldn’t even be allowed in the starched crowds he frequented. But one thing tipped the scale: power.

Wealthy businessmen courted his favor. Their rich-bitch wives wanted to have sex with him. Sometimes he would oblige them. But that was Philip. He made the rules and then broke them.

Rose lives with Philip in his mansion and he, as much as he can, controls her life. He does so because he wants to protect her from the world–Rose has a trauma in her past that shaped her and how Philip sees her. In the years after Rose was first hurt, she needed the safe, “sterile” world Philip created. Perhaps if I’d met Philip in the earlier books, I might have seen him differently but, to me, he is a monster. The love he feels for Rose–it’s completely non-sexual–is corrosive. Rose understands that. She is ready now to live her own life, but she’s afraid to let her brother know because “Philip wouldn’t take that well.”

Her plans to open her studio are not the only thing Rose keeps from Philip. For years, Rose has been drawn to Drew, Philip’s lawyer.

I knew what it felt like to live in the outside world, which was exactly why I preferred my neat, sterile chambers. For years, I had preferred to stay frozen—untouchable. But lately the wicked thoughts about Drew had spilled over into heated feelings and busy fingers at night in my bed. And worse, I wasn’t sure how much longer I could keep them to myself.

The changes weren’t all on my end. He looked at me longer, more intensely, and I stared back, so very tempted. Sometimes I thought that was all we’d ever do: forever watch each other, the air between us as formidable as ice, undaunted by the incipient heat of my body whenever he was near.

Rose believes, with good reason, Philip would furious if she and Drew got together. That fear, however, is no longer enough to keep Rose from going after Drew. For his part, Drew seems unfazed by the threat Philip poses. One night, Rose finally approaches him when Philip is out of the room. When Rose asks him if he wants her, Drew answers,“You would run from me screaming if you knew all the ways I want you.”

Later that night, as Drew stands by his car, Rose is in her bedroom watching him. He sees her and begins to watch her back. Rose musters up her courage and performs a sensual strip tease. The next day, while Philip takes a call, Drew comes to Rose and returns the favor. They begin a relationship, one that Rose wants to keep secret and Drew does not.

Tempting Fate charts Rose’s journey to independence. The journey is a two steps forward, one step back one. In real and often terrifying ways, Philip blocks Rose’s efforts to be the sovereign of her own life. Rose is determined, however. She works to open her studio, and manage her finances–she doesn’t want a penny from Philip. At every juncture, Drew is there for her, supporting her, reaffirming her new sense of herself, and making her feel cherished. Drew’s behavior stands in stark contrast to Philip’s, so much so that they seem to represent good vs. evil.

The relationship between Philip, Rose, and Drew is complex and, in the too little time she has, Ms. Lin writes confidently about their emotions. But, even as I understood her insights, I didn’t experience them as a reader. I couldn’t understand what motivated Philip or Rose much of the time. Drew says he’s cared for Rose forever, but, without more context, I wondered why he was finally willing to risk so much now and not before. I felt like Ms. Lin needed more pages to tell her story convincingly.

Tempting Fate is a dark, sexy read. Ms. Lin’s writing is infused with melancholy. For Rose and Drew love is risky. Philip is a dangerous man and, even at the end of the book, I wondered if the HFN Rose and Drew carve out for themselves will last. Ms. Lin is writing one more book in the series, Philip’s story. It’s hard for me to imagine any believable redemption for him, but, here again, my perceptions of him are circumscribed. I only experience him as he reacts to Rose and the relationship she has with Drew.

I enjoyed Tempting Fate, but as a stand alone story, it doesn’t work. I give it a C+.