I appreciate what the Tantalus Club series is about. In the 19th Century, women held few rights. For many, there were only a few options for a life of independence. Almost all of those choices depended on the use of one’s own person as the form of currency, whether the transaction was blessed by marriage or outside the bounds of what was considered appropriate by polite society. Against this setting, you’ve created a club that is run by women to provide a haven for women. The women that seek refuge in the Tantalus Club are from a variety of backgrounds but most all of have been scorned by society for some reason. Camillle is one of those women. 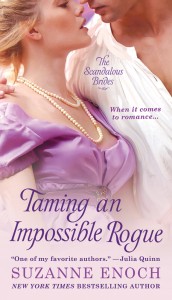 A reader’s reaction to this book will depend largely upon their sense of romanticism.  In other words, is the pursuit of love in marriage sufficient to drive every action and justify every decision?  I’m far too pragmatic of a person to buy into that theory and thus I struggled a great deal with this story.

Camillle left her fiancé at the altar, thus ruining herself in the eyes of society.  Her family turned her back on her because her actions negatively impacted the marital prospects of her sisters and tarnished the family reputation. She ultimately found refuge in as a hostess in the Tantalus Club. Camille is presented as this doe eyed lovely girl who is put upon by the circumstances of her life.  She was pampered and spoiled and enjoyed life as the wealthy, pretty daughter of a well set family. However, she was expected to marry a man who didn’t love her, never courted her, and she didn’t know. From this she rebels.

Her fiancé, Fenton, was presented as a foil and sometimes as a villain, but I never found him such.  Instead, I found him at least as sympathetic a character as Camille. He points out that she did not seek him out.  That he did not require courting, flowers, or remembered birthdays or letters.  He was prepared to do his duty and yet she left him at the altar, a laughingstock amongst all their acquaintances.

In an effort to make Camille seem less the villainous, Fenton was adorned with prosy and boorish behaviors, refusing to bend to court her when he wants to marry her and restore her reputation and his own.

His relief is Keating Blackwood, a man so scandalous that women both run from and go to extreme measures to get into his bed.  He had killed a woman’s husband after Keating was found cuckolding the man.  The man came after him and Keating was required to shoot him in self defense.  Since the scandal, Keating retreated Shropshire to his small home and farm and has been trying to earn his redemption. Fenton gets Keating to come back to London and act in Fenton’s stead in exchange for money. Fenton wants this money to fulfill a debt of honor.

I understood the attraction between Keating and Camille and definitely felt that they belonged with one another.  But I couldn’t see Camille as anything but spoiled and entitled.  She didn’t have much depth. Most of her thoughts were directed at courtship and romantic love and very little was focused on the repercussions of her actions and her limited future. Maybe it would have been helpful looking at Camille as a teenager, her actions were capricious but perhaps befitting her upbringing. I would have thought that her subsequent fall from grace would have imbued a certain sobriety or thoughtfulness regarding her circumstances. Camille had so few options but never looked at them with any sense. What was her future plan?

Camille’s singleminded pursuit of love in marriage was idealistic and unfortunately I could not buy into the story as much as I would like. C+