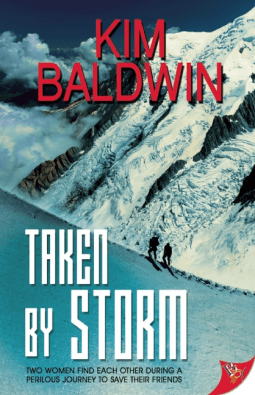 Lives depend on two women when a train derails high in the remote Alps, but an unforgiving mountain, avalanches, crevasses, and other perils stand between them and safety.

Associated Press reporter Hudson Mead is an extreme skiing enthusiast who has covered war zones and natural disasters during her long and distinguished career, but nothing could have prepared her for the challenges she’ll face when the snow train she’s riding is decimated by a massive avalanche.

Librarian Steffi Graham, on her first trip abroad, is anxious to hone her rock-climbing skills in a new and unfamiliar terrain of ice and snow. She gets much more than she bargained for when her talents put her on the team that goes for help.

As the two strangers struggle to reach civilization, they must compromise and learn to trust each other, a task that may be nearly as difficult as the journey itself.

When I read the blurb for this, I didn’t have any idea what I was actually getting into. Sure I thought I’d get an action, adventure book – avalanches, rock climbing, a bit of hiking out to safety and we’re done here. Oh no, it’s much more than that. It’s a disaster movie in print with life or death on the line for far more people than just Steffi and Hudson.

Like a good 1970s disaster film, it starts with introductions to the leading characters and their secondary backups. Steffi the cute and sexy librarian likes rock climbing while mature and sexy Hudson lives for those moments she can escape from her hard hitting reporting for some extreme skiing. We can see that their paths will cross on an Alpine train while with groups headed into the Swiss mountains for winter sports in a time of unseasonable snow. Cue ominous music.

After an airport meet-cute and some transatlantic flirting while shoe-horned into economy seats, all arrive in St. Moritz and a few new secondary characters appear on scene for a lot of pages of touristy stuff. I’d be interested in this if I had an imminent trip planned there but as it was, frankly I was getting antsy for the avalanche. When all were aboard the scenic train trip to destiny – with lots more photo ops and background information on the train – I could finally sense the danger ahead as some of the characters noticed and worried about the amount of snow coming down and building up. The ominous music in my head intensified.

The ginormous amount of snow finally came crashing down on the train and all hell breaks loose. Props for not soft peddling the extent of the damage to the train or people. Not everyone initially survives the wrenching impact and there are traumatic injuries galore. Added to this, the train is now mainly buried under feet of concrete snow, there’s no heat, little water or food, lots of blood and broken bones, no contact with the outside world which is struggling with country wide disasters. It’s time to see what these characters are made of.

Life or death situations show up a lot in romances to move emotional or physical intimacy along. Here it serves to give Hudson and Steffi a fast tract view of each other. Nothing like a disaster to strip away the layers and reveal a core identity. Hudson has dealt with this sudden, wrenching trauma during her war and disaster reporting and though most passengers step up with her, not everyone does which seems pretty true to life.

I did get annoyed that it’s mainly the Americans who end up doing the heavy lifting of saving the day both on the train and in the outside hunt for them. With an international group of people traveling in Switzerland, does this really have to be? Okay one German guy acts as a translator for what they hear on the radio but for the most part the other nationalities are cardboard. And what’s with the lack of English language skills? Not that I’m saying everyone there ought to speak English, I’m just saying most Europeans have far greater fluency in foreign languages so the pigeon language and pantomime communication seemed “off.” Plus with the action taking place where the Rega Swiss mountain rescue as well as the Swiss Air Force are located, it was ludicrous to me that an outside agency was needed to find the stranded people.

I wondered how with a bunch of people also trained in mountain sports, it would be Steffi and Hudson who end up hiking for help especially as Steffi is one of the least experienced rock climbers there. By the end it made sense as one by one the other able bodied passengers were put out of commission. It was getting to be like “Ten Little Indians” there. But believe it or not, I was actually enjoying watching everyone pull together and contribute their bit of Boy Scouts or MacGyver knowledge to the pot for the group survival.

That hike was a trip through hell finally ending after a lot of “what else could possibly go wrong” stuff. I like how Steffi and Hudson find reserves of strength and courage with each contributing what she does and knows best in order for them to survive. Each gets moments to shine and it’s a team effort all the way thus allowing them to bond, talk and quickly develop trust and an emotional base for their HEA.

Since so much time is spent on actual survival, physical intimacy doesn’t arrive until almost the end of the book where it felt almost tacked on along with the end wrap-ups that, IMO, dragged too much. This is actually one book that I would have felt fine with a vision of a bright, happy, hopeful future then a fade to black. I felt the book has good points as well as things that irritated and baffled me. The reality of the disaster is good while the emphasis on Americans is weak. Watching Steffi and Hudson get to know each other outside of sex is good while the ultimate lack of much intimacy, emotional as well as physical, until almost the end of the story was a letdown. Just a kiss or three here and there would have made the difference. I’m left scrambling for a grade that sort of evens out at a C+