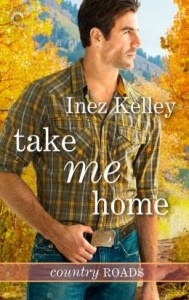 I first heard of Take Me Home when you posted about it in the author promo thread, and was intrigued by the West Virginia setting – not a particularly common one in romance – as well as the characters’ backgrounds. This is a difficult book for me to review, as there were parts of it that worked very well for me alongside some that really didn’t.

Matt Shaw grew up in the mountains of West Virginia, but poverty and misfortune eventually forced his family off their land when he was a teenager. Twenty years later, Matt works as a forester/logging manager and is assigned to a job at site of his old home. The property now belongs to Kayla Edwards, a former army brat who longs to put down permanent roots. Living in a place with a rich family history appeals to her, as does the mountain landscape and the possibilities for her organic food business. Kayla wants to clear some trees and sell the lumber for extra income, which she needs to grow her business. While the job itself is a standard one for Matt, doing so at a site that holds so many memories is a far greater challenge.

Both Kayla and Matt are looking for a place that can be a true home for them, Kayla due to being constantly uprooted and Matt mostly in order to feel truly secure. Both are more focused at first on finding a physical home rather than an emotional one – Kayla works very hard and loves living in the mountains, but has no real friendships at the outset, while Matt shares very little of himself with most of the people in his life.

At the 25% mark or so, my impression of Take Me Home was almost entirely positive – you had written two likable and interesting characters who behaved like adults, had great chemistry, and seemed happy to follow through on their attraction to each other. I wondered, however, how you would be able to keep them apart for the remainder of the book in a believable way. As it turned out, this was indeed a problem, because there just wasn’t enough there to sustain the conflict for me.

Because Matt finds it so difficult to deal with his past, let alone discuss it with others, his old link to Kayla’s home remains a Big Secret for much of the story, longer than I would have liked. It’s not that he has come back to carry out some far-fetched revenge plot, nor does he blame Kayla for buying the property when she had the chance. But there is a fair bit of moping and Matt going hot and cold when confronted by various memories and people he’d once known.

When so much of the plot and conflict hinges on a big secret, I feel that there should be a truly compelling reason for it to remain that way. It was clear that Matt was deeply affected by growing up poor, the traumatic eviction from his childhood home and the difficult circumstances his family faced afterward, which included temporary homelessness, losing his girlfriend and many of his friends, and the premature death of his father. What was less clear to me was why he did not discuss any of it, even briefly, with Kayla – perhaps not at first, but certainly as their relationship developed over a period of several months (I think; there were a few jumps in the narrative) and moved past the lust stage to a more serious commitment.

I also had some issues with Kayla’s reaction when she finally found out what Matt had kept from her. While his silence definitely needed to be explained, I felt that she overreacted and attributed some rather shady motives to him, and on very thin evidence. This was explained in part by a betrayal she had suffered in a past relationship, but because this was only explained afterward, it came across as more of a convenient justification rather than being true to her character. Consequently, Kayla and Matt’s willingness to walk away from their relationship so quickly, and for what turned out to be a fairly lengthy period of time, was something that didn’t really work for me.

There was a lot that I did like about Take Me Home, including the way you brought the setting to life – having never been to West Virginia, I’ll assume it was indeed authentic – the details of Kayla and Matt’s work, and parts of their relationship as well; they seemed like real people with real lives, interests and concerns. I’d also add that Matt’s shame about growing up poor and some of his father’s choices could strike some readers as problematic. On the other hand, his parents come across as loving, caring people who tried very hard to make things better for their family. Having read several books in which poverty was linked with various forms of abuse, addiction and neglect, I appreciate your choosing to go in a different direction.

Take Me Home is not a bad book, but I do feel it could have been a better one, and considering how promising I found it at the start, I really wish I could have enjoyed it more.