I read your debut new adult novel, True, earlier this year. While I liked it overall, I thought there were some major flaws and the ending failed to work for me. That said, it wasn’t enough to deter me from the sequel, Sweet. My interest was only further piqued when a friend told me I might like it because it had a similar set-up to All of You, a new adult novel I read last month and enjoyed. 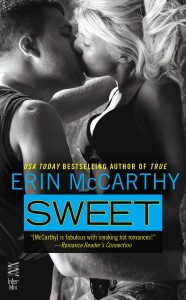 Sweet focuses Jessica and Riley, her a friend of the heroine and him the older brother of the hero from True. Jessica is the only daughter of a well-off, religious family. To put it into perspective, she’s double-majoring in religious studies and interior design, both of which were picked out by her parents. Why? So she can be pretty church arm-candy. Yes, it’s about as dire as it sounds.

But her time at college has given her freedom from her parents’ judgments and controlling attitudes. She can’t stand it anymore and rather than go home for the summer, she chooses to stay at school. Unfortunately, Jessica needs a place to stay and her only option is with Riley Mann.

While I wasn’t sure what to think about Jessica initially, I found myself liking her — almost against my will – by the end. Privileged rich girls are a tough sell for me, and I cringed at the observations Jessica made about the poor and lower class. But as I read the novel, I warmed up to her. Jessica was raised to be arm candy and in many ways, is treated like that’s all she’ll ever be, but she’s actually pretty sharp. Where she falls down on is life experience and I liked that she acknowledges this.

What I especially liked about Jessica was that she never let her lack of experience stop her from doing something. She attacks life at times, and while this occasionally lands her into trouble, I’m fond that character trait. I also appreciated her willingness to work, like when she decided to decorate the Mann house in preparation for the social worker visit. She may be rich but she’s not lazy.

For his part, Riley is a decent hero. After the events of True, the Mann boys had to change their plan. Now Riley has to get custody of the youngest Mann brother, Easton, and that’s an uphill battle. Their house is being foreclosed on. They live in a bad part of town. Riley doesn’t want them to take Easton away but a part of him is hopeless when faced with the realities of their situation. It takes Jessica staying at his house to show him that all things are still possible.

I thought Jessica and Riley had a great dynamic. Riley shocks Jessica out of her privileged bubble, which I think makes her a far better and interesting person, and Jessica gives Riley hope. I normally am not a fan of hate-to-love romances but I thought Sweet showing that the “hate” stemmed from being too much alike underneath all the superficial differences.

I also liked that Jessica owned her sexuality and refused to be ashamed of it. Readers who’ve read True know that Jessica slept with Tyler before he got together with Rory and since Tyler is Riley’s brother, this can’t stay a secret forever. This is a novel where the slut-shaming is actively challenged and denounced by both the narrative and the heroine. That said, I think the narrative was trying to reframe Riley’s perspective as ridiculous jealousy but it never quite pulled it off. To me, he was still slut-shaming, just trying to hide it behind a pretty veneer. Other readers might feel differently though.

I also thought the inevitable confrontation between Jessica and her parents was a letdown. Given the build-up and the fact she lied to them about her whereabouts, I expected more conflict. Instead it was over in a chapter. I guess I wanted more of an explosion. It was a set-up geared towards lots of drama and I was a little disappointed that didn’t happen. Which probably says a lot about me. I did like the fact that the more forgiving parent was her father, the minister. I’m keeping this vague to avoid spoilers but I thought Jessica’s father reacted in the way I’d want a religious figure to. (“Hate the sin, not the sinner.”)

Much like with True, I thought the first half of Sweet was stronger than the second half. It’s not that there was anything wrong with the last half of the book. It’s that the tension and pacing floundered. Everything just seems to end abruptly. Since this is the second time this has happened, I think it’s just a characteristic of your writing style that simply doesn’t work for me.

For me, Jessica was the star of the book, which makes sense since she’s the source of the title. (Sweet is her last name.) I enjoyed her journey greatly, probably more so than the romance with Riley. But despite the parts I liked, the second half left me thinking, “That’s it?” and because of that, Sweet gets a C+ from me.