REVIEW: Sultry with a Twist by Macy Beckett

I stayed away from this book initially because of the heroine’s name, Mae-June July Augustine, made me think the book would be full of Southern homilies and hijinks. There is Southern flavor such as the heroine’s favorite epithet being “Sugar” but it’s not overwhelming. 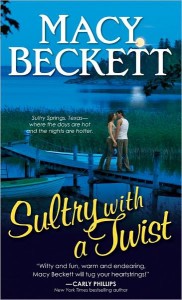 Mae-June July, called June, is a month away from opening her dream, a fancy martini bar in Austin, Texas. She has worked double shifts, scrimped on clothing and food, eschewed personal relationships for eight years in pursuit of her dream. Her bar is placed in jeopardy when an outstanding warrant for her arrest dated nine years ago sits on her record unresolved. She returns to her hometown, the situs of her nine-year-old crime of indecent exposure, to be given the option of serving a one month community service sentence or be placed in jail.

June selects the one-month community service sentence and moves back into her childhood home with her grandmother. She is not seen her grandmother in nine years, having moved away upon a falling out with her family and a break up with Luke Gallagher.

Luke Gallagher was taken in by June’s grandmother when he was a boy. Luke believes that he is not a man worthy of love. That is why broke June’s heart so many years ago and that is why he resists her attempts to reconnect with him now that she has returned.

Luke has remade his life and now runs a construction company that has a charitable arm wherein he provides building services to people in need. June’s community service to assist Luke’s charitable construction endeavors, a program called Helping Hands.

I think the twist in the story is that June recognizes Luke’s insecurity and sets out to prove to him that he is worthy of love in general and her love in particular. The two drawbacks in the story are Luke’s insistence on holding onto his feelings of low self-esteem when it comes to June and June giving up her eight-year dream of owning her own bar. Luke did make mistakes in his life  and there are things in his past that could be considered legitimate sources of ongoing embarrassment and shame however the focus on Luke’s angst became a sort of emotional constipation.

The small Texas town of Sultry Springs is well drawn, full of interesting and sometimes eccentric people.  It has a strong church presence and lots of interfering gossips. I didn’t get the same sense of glorification of the small town as I have in other books, as if life in Sultry Springs was qualitatively better than a life in Austin.  Instead, life in Sultry Springs was what suited Luke the most and June was determined that Luke received the measure of happiness that he didn’t think he deserved.  June’s sacrifice becomes obvious early on and while I wished for something more surprising, in the end, I had been well prepared for the results.  C+