REVIEW: Straight from the Heart by Kimberly Gardner 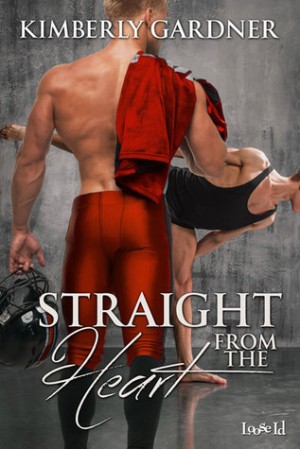 I read and enjoyed your previous book His Fair Lady, which Jayne reviewed here, so when I saw you had a new book out, requested it for review.  I found Straight from the Heart hard to grade because what was in the book, for the most part, I enjoyed very much.  However, there were quite a few things that were missing from the book and when I think about those things, I feel a little frustrated at the missed opportunities.

The set up is that Kyle, a dance major, has had his financial aid cut and in order to stay in school, he needs to get the job of football mascot (a red and grey “snow leopard”) which comes with a full scholarship.  Dave Masterson is the quarterback of the Snow Leopards and his coach has “asked” (aka ordered) him to have some ballet training to help “take him to the next level”.  Kyle needs to have a crash course in football to pass the interview portion of the mascot application and Dave needs to learn some ballet.   When I read the blurb, I was expecting ballet to play a more prominent role in the story.  I happily read up on dance belts and the difference between women’s ballet shoes and men’s ballet shoes in anticipation.  But there was hardly any ballet training in the book at all.  Almost all of it was off page and even that was minimal after the first lesson.  In the end, it was no more than a device to get Kyle and Dave together.

It was particularly disappointing because their first ballet lesson was hilarious.

For purposes of demonstration, Kyle did a demi plié.

Masterson squatted like he was perhaps about to lay an egg.

“Don’t stick your butt out. Engage those core muscles. And stand up straight, chin up, shoulders down. Don’t look at your feet. They aren’t going anywhere. Oh, and arms en bas.”

“En bas. Like this.” Kyle held his arms in low first position.

Masterson stuck his elbows out and held his hands at his waist. “Like this?”

“No, more like…” Kyle considered how to best explain. “Pretend you’re naked and all you’ve got to cover your man-parts is a football. And a nun walks by.”

“Yeesh!” Masterson shuddered, but his arms found the proper position.

Dave is, at least nominally, straight.  Kyle has an immediate crush but knows it can go nowhere.  Dave has a reputation as a “cheerleader-fucker” and has what seems to be an on-again-off-again relationship with the head cheerleader, Lacey.  For a lot of the book I wasn’t actually clear on that relationship.  Lacey’s name was mentioned but not a lot of context was given – at first I thought she could be a sister or some kind of mentor/counsellor.  Once I worked out that Lacey was a girl Dave was dating, it took a long time for me to understand that Kyle actually knew this (literally at the 70% mark of the story) and then I wondered whether this represented a problem for either of them – because, if it was, you wouldn’t know by reading the book.  Almost all of the interaction with Lacey happened off page and I had to infer a few things to make it all work.  When Lacey did have some page time late in the book, I was kind of disappointed to have missed her because she was not much like how she was first represented.

When Kyle and Dave first meet, it is just before Spring break. Things start to get interesting but then school is out and Dave and Kyle are headed to different places for the summer. There is nothing about what Kyle was doing during this time and only a little snippet of Dave’s activities. They do meet briefly over the 4th of July weekend when they are both at the beach house Josie and Mark (from His Fair Lady) are renting for the summer.  This section ends incredibly abruptly – before the weekend is finished in fact – and when the book then skipped to fall semester, I felt like I’d missed out on something.

I don’t know if it’s just me, but sometimes when I see a picture such as one like this (for example, also; you’re welcome): 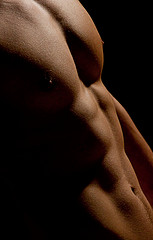 I click on the image and try and peer up or down to see the bits that are tantalisingly unseen.  I felt that way about this book.  There were things I wanted to know about but the story stopped and picked up somewhere else and I was left peering in between the lines to try and see what wasn’t there.   (Possibly that made more sense in my head.)

Dave isn’t completely straight but during the course of the book he doesn’t exactly come out and clearly identify as bi or gay either – although by the end (spoiler!) he and Kyle do get their HEA.  This wasn’t a problem for me because it reflected Dave’s ongoing journey and there was no doubt that he was definitely into Kyle, regardless of how he chose to express his sexual identity. I don’t think there’s a rule that says a person has to have a label for their sexual orientation.  I appreciated that Dave had had some (limited) previous male/male sexual experience and I also understood that in general terms, most guys didn’t do it for him.

There were a few bits in the book which I felt were a bit meta (the “him” in the following quote is Kyle BTW):

and this (although, unlike the previous quote, this one worked for me):

Kyle and Dave have more in common than either first thought likely.  Dave is not a dumb jock although he sometimes plays to the stereotype a little.  They get along well, enjoy each other’s company and have plenty to talk about.  I would have liked a little (okay, a lot) more of this; mostly because they have such a great dynamic and it was fun to read.

I liked the descriptions of the football and Kyle’s antics as the mascot sounded like so much fun – I wanted to see it for myself.

The dilemma Dave faces in openly dating Kyle is real. Yes, Michael Sam was drafted into the NFL last year but he also went a lot lower down the list than people expected he would – and, I believe, this was attributed to him being openly gay. Dave wants a career in football.  Publicly dating a guy before he’s drafted could be career suicide.  But, if he doesn’t date Kyle publicly, he can’t date Kyle at all.

The ending, even though I liked it, was abrupt however and the epilogue once again tantalised and hid more than it revealed. And, having set up the dilemma, it kind of glossed over the real problems Dave and Kyle faced.

I enjoyed catching up with Mark and Josie and, having now realised that the first book in the series (Almost Heaven) is about Mark’s brother, I plan on reading that one as well.  I like your writing voice very much.  It led me to the somewhat odd experience of both liking and disliking the book at the same time.  I liked almost all of what was on the page – if only, it hadn’t felt cut short in so many places, I think this one would have been a B+.  As it was, I’m going with a C+.