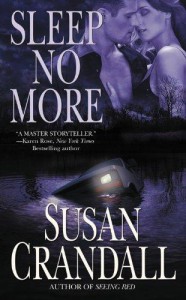 enough to buy two other backlist titles of yours: Seeing Red and Back Roads. I found I liked your overall balance of suspense and romance so I was excited to read Sleep No More.   The   tone of this book was quite creepy, particularly in the beginning.

Abby Whitman sleepwalked as a child.   One night she apparently starts a fire which results in her younger sister suffering terrible burns.   Abby thought she grew out of the sleepwalking but she’s been forever touched by her family tragedy.    She lives alone in a smaller house in her family property, close to her father who has been increasingly forgetful.   She fields phone calls from her bitter, lonely sister.   She misses her mother and she is alone.   While she never suffered a sleepwalking incident as an adult, she always feared it would return so she lives by herself so as not to endanger any other person, as she endangered the lives of her family members.

As the story opens, Abby finds muddy footprints in her house and realizes that she has started to sleepwalk again.   The situation escalates when Abby awakens in her flower delivery van to find a body of a young man laying near the road.   He’s dead and she cannot remember if she struck him.

Jason Coble, a local psychiatrist, is struggling to be a parent to his daughter and former stepson after Jason’s divorce.   His former wife was an alcoholic who simply could not or would not stay dry.   His stepson, Bryce, misses Jason’s presence in his home.   He’s convinced that if he and Brenna are good enough, Jason will return and they will be a family again.   But his mother is drinking again and she was gone missing the night of the young boy’s death.

You present more than one possibility for the young boy’s death.   Certainly all points seem to implicate Abby and her inability to remember, the return of her sleepwalking, the crisis with her father, all provide good tension for the story.   Complicating this is that Abby becomes the target of some increasingly scary vandalism.

Jason has seen Abby around but was either married or unready.   When she delivers flowers to a funeral of the young boy and the parents are distraught and attack Abby, Jason intervenes.   In short order, Jason finds himself deeply attracted to Abby.   While all the characters voiced the right reservations about the speed at which their feelings developed, I was never really convinced of their attraction.

I wondered if you recognized this because the story often references how Jason and Abby grew to care so quickly for each other. Jason:

Abby Whitman had already crawled more deeply under his skin than he should allow-‘and astoundingly quickly.

Although it was far too soon to make such a statement, he felt he could fall in love with her.

It blindsided him how quickly he’d become emotionally involve with her.

Later Abby notes “Even after this short time, Jason Coble was going to be a bad habit to break.”   It’s possible the multiple references to how fast the romance was progressing actually emphasized this point to its detriment.   On the other hand, significant attention was paid to the emotional conflict in the relationship which added depth to the romance.

Another problem I had with the story was that Jason seemed more like a detective than a psychiatrist.   At one point, he smelled gas when no one else was able to.   He noted that the glass inside Abby’s van indicated that it was broken from the outside rather than from the inside out.   He was able to shoot a handgun like a sharpshooter.

I really like the portrayal of Bryce who was suffering from the loss of his father figure and struggling with his mother’s alcoholism.   His reactions to his family disruption were believable and   provided another good emotional layer.   I also appreciated that the local police were competent and not corrupt.

I worried about a possible pedophilia aspect when the Jason’s daughter and a down syndrome girl were introduced and thankful the author didn’t go down that path.

There was some spark missing for me between Abby and Jason.   While the suspense plot was good and lacked the usual serial killer, I felt that the romance was forced.   C+

This book can be purchased at Amazon (affiliate link) or in ebook format from BooksonBoard or other etailers (no affiliate link).