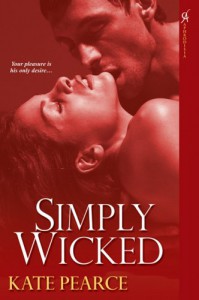 Anthony Sokorvsky is the 25-year-old younger son of an aristocratic family. Marguerite is a widow whose husband, Lord Lockwood, was killed in a duel under scandalous circumstances two years previously. They are brought together when her younger siblings decide that Marguerite needs to get out and circulate and choose Anthony to squire her (he seems an odd choice given that they know him from his frequent appearances at their mother’s brothel).

I felt rather at sea in the early chapters of Simply Wicked – though it is ostensibly set in 1819 London, at times it almost seems like an alternate history or alternate universe London, one where the daughter of a notorious madam can marry a lord and circulate in society with relative ease, and where the sexual pecadilloes of the hero – whose inclinations before meeting the heroine consist of playing the submissive in rough sexual encounters with other men – are openly known and discussed amongst his family, including his mother. I understand that perhaps some of the hyper-charged sexuality of the world you’ve created is due to Simply Wicked being an erotic romance, but when I think of the erotica I’ve read, even set in contemporary times (where attitudes might be expected to be looser), the sexual behavior of the characters tends to take place within a prescribed world.

I think the story would’ve been stronger if the hero and heroine were better developed. There are references to Marguerite’s upbringing in a strict convent orphanage and her desire for her own home and family, but I felt that I was missing some backstory that would’ve fleshed out her character. I had the same reaction to Anthony; it seemed that the book was written with the assumption that readers would have read previous books in the series, and would know how he came to crave punishing and degrading sex with other men.

And about that…as I am not a regular or avid reader of m/m or bdsm romances and/or erotica, I don’t feel qualified to definitively state that the presentation of the the relationship between Anthony and Lord Minshon (Anthony’s chief lover/tormentor/villain; apparently the hero of a future book in the series) was offensive. But it did feel a bit so to me. I will admit that I’ve read enough gay villains in straight romance (no pun intended) to be a little sensitive on the issue. But it does seem that their relationship was problematic in that it introduced a couple of hackneyed and unpleasant cliches: 1) the man who “turns” gay after being raped/sexually abused by another man and 2) the man who must be “saved” from his “perverted” behavior by the love of a good woman, a love that is sanctified only when he is able to dominate her in bed. On the second point, to be fair, it’s clear at the end that Anthony is still interested in kinky stuff (and Marguerite is okay with that herself, so it’s not a problem). I’m not trying to suggest that Marguerite turns Anthony straight. But there are those aspects to the story, and they did make me a little uncomfortable.

I appreciated that the story focused by and large on the emotional developments between Anthony and Marguerite, and each of their journeys to self-acceptance. Towards the end, I began to tire of the excessive self-flagellation that they each indulge in (I guess I should specify I mean emotional self-flagellation, given the subject matter presented in the book). Both of them repeatedly ponder how the other could ever love or forgive them for their misdeeds. It’s annoying when one of the lead characters does this; when they both do it’s just that much more aggravating. At least there were no extraneous suspense plots or mysteries to be solved; the heroine does attempt to discover the truth about her late husband and his death, but it’s a subplot that’s woven fairly skillfully into the story.

I thought the sex scenes were pretty hot, for the most part, and the story was well plotted and flowed smoothly. Ultimately, I wonder if Simply Wicked tried to straddle the line too much between erotica and romance. There is a slightly unbalanced feel in the way that the hero’s sexuality is depicted versus the heroine’s relative innocence (especially given her parentage). When the truth about the circumstances surrounding the death of Marguerite’s husband finally comes out, I rolled my eyes – even in a book as racy as this one, the heroine is expected to retain her essential “purity”? Really?

Despite my complaints, I found some aspects of this story compelling enough that I would be interested in reading one of your future books. The excerpt of Lord Minshon’s story at the end is intriguing, even though I kind of hated him in Simply Wicked. I am concerned that again we have a hero who solely has relationships with other men until the heroine appears (or reappears, in this case). I’m not sure how I feel about that. I would love it if the heroine is given a little more leave to indulge the same behavior as the hero.

My grade for Simply Wicked is a C+.

This book can be purchased at Amazon or in ebook format from Sony or other etailers. (Note, the book hasn’t shown up yet in the Sony store because the book hasn’t been released but given that the other books in the series are digitized, it seems safe to say that this book will be available in ebook as well. This is a trade paperback thus the higher price point.