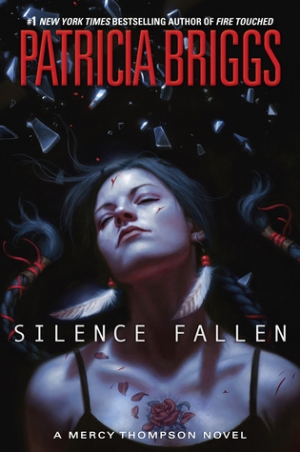 First off, I’m so very sorry about the sudden, devastating loss of your husband, Mike, earlier this year. My heart goes out to you and to your children. I can’t even imagine how you must be feeling. And knowing that your grief must be incredibly deep and wide right now, I feel even worse about not loving Silence Fallen as much as I wanted to. So maybe, don’t read this review? I didn’t hate the book by any stretch but I didn’t love it either. I wrote the review which follows the first week in January before your world imploded. You’ve got enough on your plate now, and this is just a book review.

I wish you all the love and support in this difficult time.

Every year I look forward to the new Mercy Thompson book. It’s one of my favourite series’. While I adore Mercy in all the ways, I admit, as a hero-centric reader, Adam is a big draw for me.

When I saw that Silence Fallen had quite a few chapters from Adam’s POV I was super excited. More Adam can’t be a bad thing, right?

Except, I was underwhelmed by the book. I’m having a little trouble putting my finger on what exactly about it made it so. It was eminently readable and I was entertained enough. It certainly wasn’t a wall-banger. But equally, apart from at the very beginning, I wasn’t engrossed. The stakes weren’t high enough or something.  I don’t think it was the Adam POV that was the problem. I enjoyed those. I even didn’t mind the way the timeline jumped around a bit or the “notes” from Mercy at the beginning of each chapter to assist the reader orient herself in the timeline. (I didn’t love it. I just didn’t mind it.)

The book had a great start though. Mercy is kidnapped after being seriously injured while on a late night run to the local convenience store/gas station for eggs and chocolate chips (she’s making cookies). And Adam, of course, is beside himself. I love a bit of high stakes angst. I love a rescue trope (and I have always loved that Mercy often rescues herself and is generally not a damsel in distress). So in the beginning, I was all in.

I think I held my breath when Adam first found the damaged truck Mercy had been driving.

There was a moment of time that was forever blank after he smelled her blood.

I think what made the story less than completely satisfying, was that the motivation for the kidnapping seemed a bit thin. I couldn’t quite pin down the reasoning or why Bonarata (he is identified early so I don’t think it’s a spoiler) would bother himself with the Tri-Cities. I mean, I understood what was in the book but it just didn’t hang together for me. He is not a good guy. He is a monster. But there was quite a deal of ambiguity in the way the plot played out. I’m not generally a fan of ambiguity. In other Mercy books, the bad guys have always been clearly bad. And the way forward has been, pretty much, to destroy the bad guy/s.

I don’t want to give too much away but that’s not really what happens here. There are some bad guys destroyed but there is far more diplomacy and compromise than I’m used to seeing.

The other thing (and this might be as big a reason as any other) is that Mercy and Adam are separated for most of the book. I get that separating them creates tension and forces Mercy to act on her own (even though I think when they are together you have absolutely nailed the execution of both Mercy and Adam being alpha and neither being diminished by the other). But it was almost like two books: Mercy’s book and Adam’s book.

There is a little twist near the end which will probably make me want to revisit certain sections of the book nevertheless. I’m not sure if I think it was too cute. I’m leaning that way (ETA: definitely too cute). I can’t really say more without giving the twist away but I think it was a risky move and I don’t quite understand the motivation for it. Perhaps that’s just me not getting subtlety again however.

I enjoyed the different location well enough – the story is mostly set in Prague and Milan – but Silence Fallen is my least favourite of the series so far. I went with you in Frost Burned. I defended Adam when Christy was messing with Mercy and he was taken in by the ex. And last year, I was blown away by Fire Touched. It was a game-changer for the series and I was amazed at how you’d refreshed it (even though I hadn’t thought it was tired) and where things might go from there. But Silence Fallen doesn’t really advance the world. It’s more of a tangent in terms of the series arc. I’m not sure I learned anything new about Mercy or Adam or the Mercyverse. In Fire Touched (spoiler alert) Mercy and Adam claimed the Tri-Cities as their territory. But Silence Fallen was set almost entirely outside of their territory and didn’t really progress that aspect of the story at all. I guess I’m still a bit puzzled by it all.

I didn’t hate it. But I didn’t love it. It saddens me but I have to give this one a C+. That’s not a bad grade of course. But for a Mercy book? Well, it’s not good either.