I requested Sharing Hailey from Net Galley because it contains two of my favorite tropes, a monogamous ménage and what I like to call the “I love my brother’s best friend” trope. In this case, Hailey Anderson loves her brother Jake’s, two best friends, Mark Allen, a woodworker and Tony Adamo, a pediatric surgeon.

After breaking up with her abusive and completely crazy boyfriend, Daniel, Hailey is headed to Hawaii with her brother and his pregnant wife, Nicki, and her brother’s two best friends, Mark and Tony. She’s always had a thing for both Mark and Tony, but neither has ever made a move towards her. Sure, they’re solicitous and kind to her, but she doesn’t think they have any romantic interest in her. So imagine her surprise when Mark kisses her while they are waiting to board the plane. Hailey is even more shocked when Mark and Tony inform her that they’ve both been in love with her for years, and had been waiting to see which of them she would choose. Given that she’s made no move, they’ve decided to propose that she enter a monogamous relationship with the both of them. They spend their time in Hawaii exploring the relationship, but also keeping it secret from Hailey’s family because they are unsure of how they will react. In the mean time, Hailey’s stalker ex-boyfriend has traveled to Hawaii to try to win her back, and he’ll use any means he has to make her return to her relationship with him. 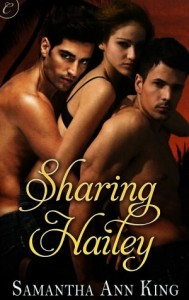 Given that you are a new to me author, I had tempered expectations going in to reading this book. There were things that impressed me about the story, but also a lot of little things that I wish you’d done differently to make the book more effective. Hailey is a likeable girl. She’s smart and funny and is very loyal to those she loves. She also looks like Jennifer Aniston, but has no idea how good looking she is. Really? It may be a personal tick now that I’ve read several “50 Shades” types of books, but heroines who don’t know they’re pretty smack of Mary Sue to me. Also, I wish that you’d done more to differentiate Tony and Mark. Having finished the book last night, I couldn’t tell you much about either of them, except that they both have rock hard abs and tight butts. I found myself during passages of the book trying to figure out which was which – who was the woodworker and who was the doctor? Also, you had a scene where the heroes flirted with touching each other, and then backed away from it. While I don’t mind a ménage where the men don’t touch, I found it aggravating to have them touch each other, get off on it, and then decide it was a huge mistake without really resolving the issue (their conversation about it happened offline). It felt like a missed opportunity to capitalize on another very spicy interaction among the trio.

I enjoyed the Hawaiian setting and thought that the suspense part of the book involving the evil ex-boyfriend helped to escalate the relationship between the trio. You have a nice hand at sex scenes, which were plentiful and varied. I also felt like the book ended a bit abruptly, as if you were approaching your word count, and had to scramble to tie everything up. This is a book that would benefit from a few more scenes before resolving the relationship.

All of this sounds like I didn’t enjoy the book, but I did. I found the story engaging and I liked the interactions between main characters. I read the book in a matter of hours, and didn’t find my attention wandering at all. You are definitely an author I would try again. Sharing Hailey gets a C+ from me.